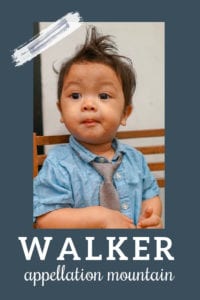 The baby name Walker started out as a surname, until a television hero helped move it to the first spot.

Just like Carter and Hunter and Archer, Walker started out as a job.

Walkers beat – or sometimes literally walked on – unprocessed wool, to clean and thicken it.

They’re also known by other names, like fullers and tuckers, which led to the rise of those surnames, too.

Given the dominance of the wool industry in medieval England, it’s no surprise that associated surnames caught on.

And, like many a surname, it’s long been used occasionally as a first. In fact, the baby name Walker ranked in the US Top 1000 every year from 1880 through 1955.

One of those Walkers? Photographer Walker Evans, known for his groundbreaking photographs of America during the Great Depression.

Evans lends the name a certain artistic credibility, and confirms that the name has long been used as a first, as well as a last name.

George H.W. followed Prescott’s path – Yale University, the military, and then into politics. Prescott served as senator from Connecticut. George H.W., of course, was a Congressman from Texas, CIA director, and eventually vice president and then president of the United States.

The Walker name continued to be passed down in the family – George H.W. Bush’s son, George W. Bush is George Walker. George W. served as governor of Texas and, from 2001 to 2009, president.

Nearly a dozen family members have Walker as part of their names.

The baby name Walker returned to the US Top 1000 in 1983. It’s tempting to connect the name’s rise to the political family. After all, George H.W. Bush was vice president by then.

Except that doesn’t feel quite right. After all, we didn’t much mention George’s middles until his son became a prominent national figure. And while presidential surnames – like Reagan and Kennedy – do catch on, this feels a little too obscure to make a difference.

Maybe it’s down to a character from hit 1981 movie Ragtime. Based on an EL Doctorow novel, the tale of early twentieth century America racked up plenty of Oscar nominations, including one for Howard E. Rollins Jr. who played Coalhouse Walker Jr. in the film.

Or maybe it’s because names like Carter and Spencer were starting to follow Top 100 pick Tyler up the charts.

In any case, the baby name Walker was used in small numbers until Chuck Norris changed things.

A decade later in 1993, the concept was rebooted for the small screen, but because of various ownership issues, Norris’ character was renamed Cordell Walker.

Maybe the baby name Walker was a little too closely identified with Norris.

In 2006, the Will Ferrell movie Talladega Nights: The Ballad of Ricky Bobby introduced us to his sons Walker and Texas Ranger. (TR for short.)

In graphic novel-turned-hit series The Walking Dead, zombies are referred to as walkers. The series debted in 2010.

About a year later, Game of Thrones debuted and introduced the world to the White Walkers.

So those are pretty creepy and negative associations, but they don’t seem to have slowed the name’s use.

Pop group Fitz and the Tantrums scored a hit with their whistling-infused single “The Walker” in 2013.

The beauty of the name? It’s so familiar that none of these associations really stick.

And, as there’s more and more distance from the Chuck Norris role, that vibe fades, too.

PAUL and ALICE and CJ and TOMMY

Other famous figures to answer to the surname include:

PREPPY WITH AN EDGE

Here’s the thing: putting aside Chuck Norris and Ricky Bobby, Madam CJ and the Bush family, the baby name Walker has mellowed into a name that’s nicely preppy – but with an edge. The name feels independent and capable, a little bit daring, a little bit restrained.

The baby name Walker suits a future banker or a snowboarder. It’s modern, but surprisingly flexible.

And that’s the undeniable strength – and considerable appeal – of the baby name Walker.

What do you think of Walker? 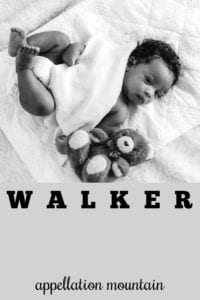