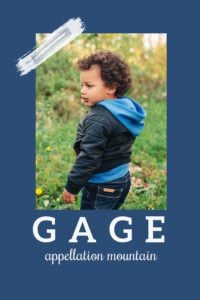 The baby name Gage feels strong and capable, but smooth and modern, too.

Thanks to Beth for suggesting our Baby Name of the Day.

Both come from the French word – gauger. It means to measure something precisely.

Originally that something was often money.

Or metal. Weights and measures mattered, back in the day before digital scales. An assayer was in charge of checking the gauges – the weights – that were used for so many transactions.

And so Gauge or Gage became the occupational surname for those who lent money, borrowed from the weights themselves. Since borrowing money is a sort of promise, the baby name Gage suggests a kind of guarantee.

In modern usage, if we’re gauging a reaction or an amount, it often means “eyeballing” or “estimating.” But other uses remain far more precise – gauges on a railway track, for example, or shotgun gauges.

Plenty of aristocratic surnames have filtered into general use over the ages. There’s Clarence and Darcy and Cecil.

Gage counts, too. At least sort of.

There’s a title in the Peerage of Ireland – Viscount Gage. It was created in 1720 for Thomas Gage. The family had been a big deal for a few generations by then, complete with a manor house acquired via marriage. Plenty of distinguished Gages followed, including a military leader and a botanist.

Thanks to the latter, there’s a genus of flowers in the lily family formally known as gagea.

All of this make the baby name two-parts occupational, one-part aristocratic.

But what put the baby name Gage on parents’ shortlists?

A smattering of boys received the baby name Gage prior to the 1980s.

The Creed family – dad Louis, mom Rachel, daughter Ellie, and son Gage – move into a home on a busy road, one known for claiming the lives of many a hapless dog or cat.

There’s a pet graveyard nearby, but it isn’t just your regular resting place for Fido. Instead, if you bury something there, it returns – reanimated and, oh by the way, evil.

Louis tries this with Ellie’s cat, so he oughta know better when his son, Gage, dies tragically on that same road.

But hey, this is Stephen King. Sure enough, Gage becomes a murderous fiend, and the tale does not have a happy ending.

Following the success of the 1983 novel, Pet Sematary became a 1989 movie. Despite poor reviews from critics, the movie proved a blockbuster success.

A handful of children received the name prior to the 1980s.

Not only did the baby name Gage benefit from the novel and movie buzz, but it fit with rising favorites like Gabriel, Jack, and Aidan.

Other notable Gages include:

If you still want to choose Gage for a son today? Because it never really hit the big time, peaking comfortably outside of the US Top 100, it feels current but not common – that could be a win.

And really, it’s a style parents have embraced since the twentieth century. Just ask a generation of dads with names like Craig.

All of this makes Gage something of a twenty-first century staple, the kind of name that we may very well hear making a comeback circa 2083.

What do you think of the baby name Gage?

First published on March 6, 2012, this post was revised substantially and re-published on November 3, 2021. 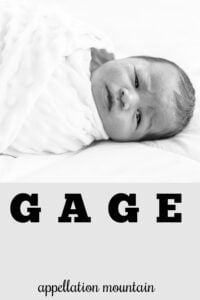