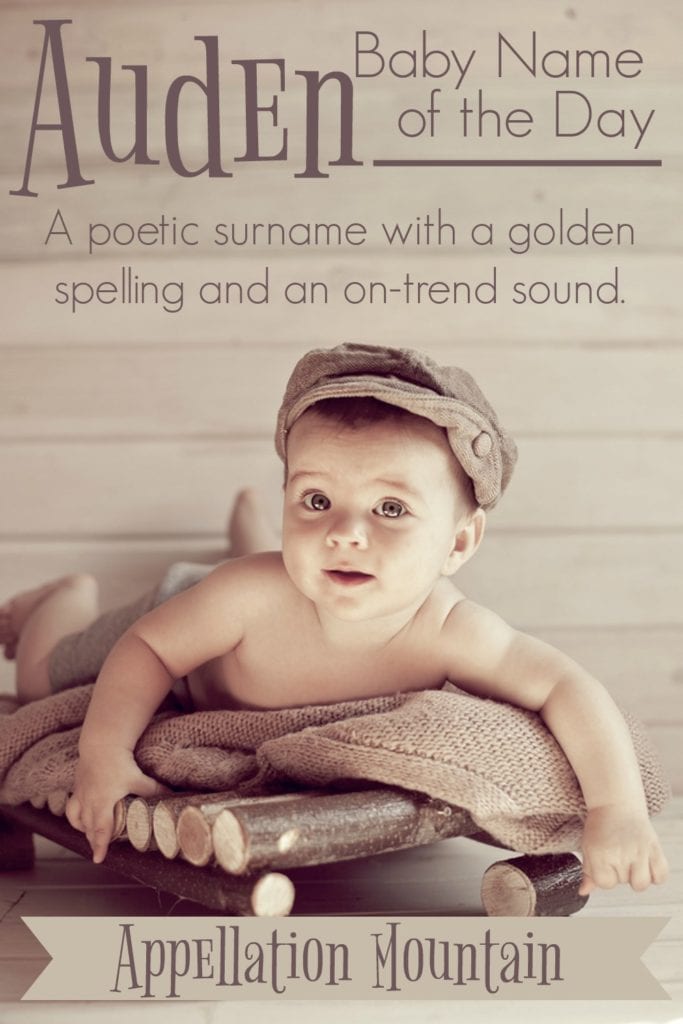 Auden makes an intriguing successor to so many two-syllable, ends-in-n boy names.

Plenty of popular baby names begin with the letters Au.

Au is the symbol for gold on the periodic table, from the Latin word for the element, aurum.

With the exception of Aurelia, few Au names actually come from the Latin word. And yet, Austin, Aurora, August, and Audrey always bring the glittering metal to mind. Auden, too, benefits from this pleasing coincidence.

The surname name’s origins are murky. Some suggest it comes from Ealdwine, an Old English name more often surviving as Alvin. Similar surnames include Alden, which appears in the Dictionary of Medieval Names from European Sources. Linking them seems possible, but far from certain.

If it does trace its roots to Ealdwine, the meaning appeals: old friend.

Regardless of the name’s origins, we know it came into use as a surname.

Auden leans literary thanks to WH – Wystan Hugh. Born in the early twentieth century, and died in 1973, the Oxford graduate eventually moved to the United States and became a citizen.

He traveled widely, and wrote on an all manner of topics: love and politics, social issues and religion. His 1947 poem “The Age of Anxiety” won a Pulitzer Prize in Poetry.

Auden also wrote widely on any number of current topics, collaborated on films and plays, including Igor Stravinsky’s 1951 opera The Rake’s Progress.

All of this lends the name a creative vibe, and puts it in the company of other literary choices, like Hawthorne and Tennyson.

Auden: By the Numbers

The poet’s works continued to grow in familiarity after his death. Perhaps that’s why we first see six boys given the name in 1975. It gained in use steadily thereafter, with 89 boys and 62 girls receiving the name in 2015.

While it remains rare, we’ve heard this name more and more in recent years.

Model Amber Valletta gave the name to her son back in 2000. Noah Wyle chose it for a daughter in 2005.

The latest celebrity baby to wear the name won’t actually answer to it. The Grammer family often sticks with a family tradition of calling their children by their middle names. After all, dad is Allen Kelsey. Allen comes from his father’s middle name.

Some of Grammer’s other children share the pattern. Daughters Spencer and Mason and son Jude do not. But Kandace Greer Grammer does, as do two of Grammer’s children with new wife, Kayte Walsh. Sons Kelsey Gabriel Elias and  Auden James Ellis answer to Gabriel and James. Kayte and Kelsey are also parents to Faith Evangeline Elisa, though she seems to be called Faith.

Grammer confirmed that his son’s first name was inspired by the poet. Middle names James is a nod to James Taylor, while Ellis comes from Kelsey’s family tree.

Auden could make a great choice for a child born today. It’s under-the-radar, but not unknown. It fits with names like Rowan and Lennon that trend unisex. The name’s literary ties help, too. And while some declare two-syllable, ends-in-n names for boys over, plenty of parents still love the style.

Overall, while this name remains rare, a little bit of extra exposure could be all it takes to make Auden the next big thing.

What do you think of Auden? Do you like it better for a son or a daughter?