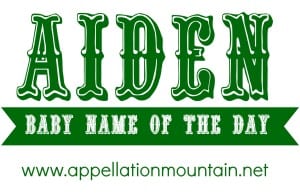 Take an Irish appellation with an on-trend sound, add a slightly different spelling or two … or three or four or even a dozen …

Top Ten week continues with our Baby Name of the Day: Aiden.

Aiden might be a twenty-first century favorite, but his roots run deep:

Aodh means fiery, and we all know that -an is a common diminutive form in Irish – think Ronan and Conan.  In Irish myth, Aodh or Aed was a god.  I’ve heard him called a sun god and god of the underworld.

So Irish roots he’s got aplenty, and that made him a logical successor to twentieth century favorites, like Ryan and Brian.  We’re wild about two syllable boy names with that ‘n’ ending, with so many favorites fitting the pattern: think of Jason and Ethan and Mason and Logan.  Factor in that bright ay sound, and how could Aidan miss?

But the story isn’t that straightforward.

Blame it on the age of Aidens.  Jayden, Jaden, Hayden, and Brayden all ranked in the US Top 100, with Kayden, Cayden, Braeden and plenty of other cousins not far behind, and names like Zayden and Raiden at the fringes.

Or maybe it wasn’t just American creativity run amok.  You can find Irishmen answering to Aiden over the ages, suggesting it was long considered a valid variant.

Stargate: Atlantis featured an Aiden when it debuted in 2004.  TeenNick chose the same spelling for a character in South of Nowhere in 2005.  And from 2002 through 2009, English actor Aiden Turner was playing Aidan Devane on All My Children.

But don’t count him out.

Roses and Cellar Doors tallied up 32 spellings of the name given to 5 or more boys in the US in 2013.  That’s without including the unusual rhyming possibilities: Draydon, Graiden, Jhaiden, Treyden, Zeiden.

Even with Aiden on the decline, he remains influential.

If you’re after a name to declare your kelly green roots, you might be better off to look elsewhere.  Today, his sound has defined a generation – and may someday sound as dated as 1940s favorites Larry and Gary feel today.

But that’s true of many a popular choice.  Aiden remains a reasonable, mainstream choice for a boy – not surprising, and subject to spelling challenges.  But a crowd-pleaser, to be sure.