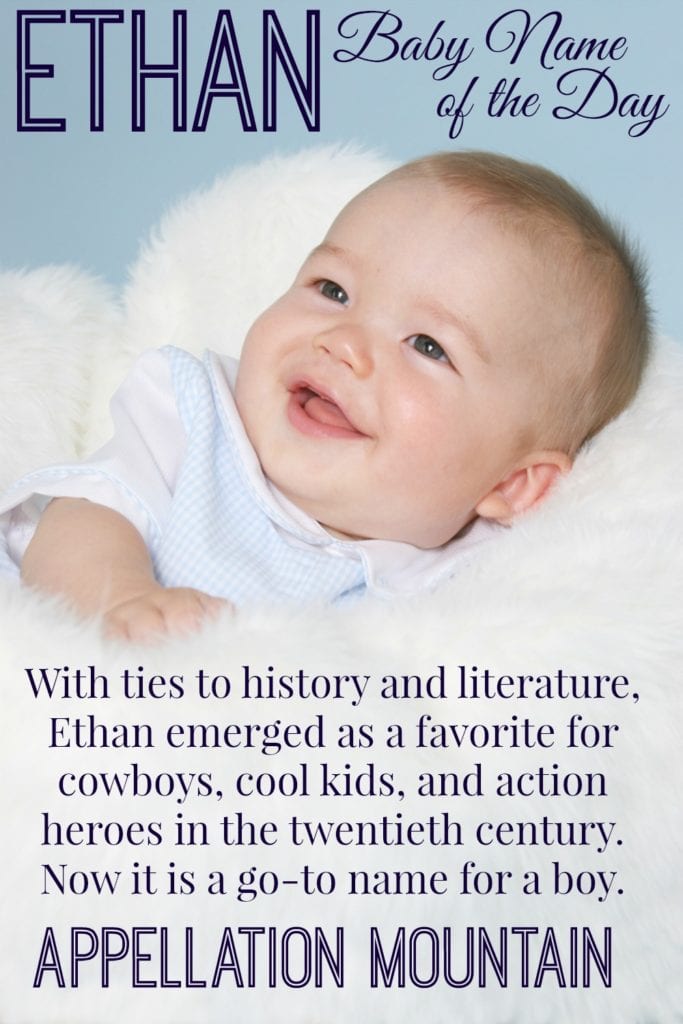 Colonial cool Ethan reached the heights of popularity in the twenty-first century.

This name means enduring. Fitting for a choice first heard in the Old Testament, where it is worn by more than one figure.

Like many a Biblical name, it rose in use following the Reformation.

Future farmer-turned-patriot was born in rural Connecticut way back in 1738. Ethan Allen’s parents studied scripture, and chose many of their children’s names from obscure Biblical figures. One brother answered to Zimri, and another to Heber.

Allen served in the militia, and ventured into politics. During the American Revolution, he secured the surrender of Fort Ticonderoga. Not long after, the British captured Allen and he spent the remainder of the war in prison. I’m glossing over details – scandalous details – in this chapter of American history. Let’s say that Allen numbers among the patriots, but one of the more complex founding fathers.

Nearly a century later, an unrelated man by the same name made guns in Massachusetts. A third took up baseball and played center field in the 1920s and 30s.

Ethan: By the Numbers

Despite a string of famous bearers, the name rarely appeared in the US Top 1000 during the nineteenth century. It disappeared entirely from 1902 through 1951.

Credit the Wild West with the name’s resurgence.

In 1956, John Wayne starred in The Searchers. He played Ethan Edwards, a soldier returned home to his Texas. When his young niece is kidnapped by the Comanche, he sets off to rescue her. The movie made a splash in 1956, and has since become a classic. It’s among the greatest Westerns of our age. In 1962, Wayne named his youngest son after the character.

The Searchers bumped the name up, but it doesn’t explain everything. Actor Ethan Laidlaw’s career started way back in the 1930s, but he picked up many a small role on television Westerns in the 1950s and 60s. That, combined with the new Air Force Base, might explain the name’s early rise.

Why the big jump?

First, CBS debuted Guns of Paradise in 1988. It rans for three seasons, telling the story of gunfighter Ethan Allen Cord, who suddenly becomes ward to his orphaned nieces and nephews. The show enjoyed critical acclaim and built a loyal fan base – more than enough to boost a name.

And then came Ethan Hakwe.

When the Mission: Impossible television series was reinvented for the big screen in 1996, Tom Cruise became an IMF agent named Ethan Hunt. Hunt has headlined five movies to date, with another one in the works. The 1996 release of the first blockbuster movie tracks with another big jump in the name’s use.

Countless fictional and real bearers of the name followed.

With a mix of history and literary ties, plus a man-of-action vibe, Ethan is likely to remain a favorite.

This post was originally published on October 17, 2008. Following substantial revision, it was reposted on November 7, 2016.