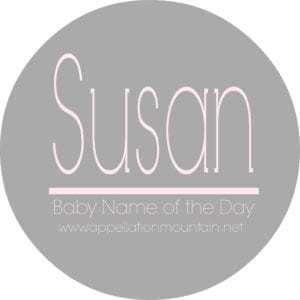 Former favorites week kicks off with a name that dominated US rankings in the 1950s and 60s.

Thanks to Catherine for suggesting Susan as our Baby Name of the Day.

Susan started out as the far more elaborate Shoshannah in Hebrew.  She’s usually Shoshannah translated as lily, but sometimes rose, or even lotus.  With all things Biblical, there’s quite a bit of discussion as to the precise meaning, but she’s clearly botanical.

A Book of Daniel –  considered apocryphal by some – she’s a virtuous wife victimized by a pair of peeping Toms.

Shoshannah shed her Sh for a Su in Greek, and became Susanna in Latin.  She appears in that form in the New Testament, in the Gospel of Luke.

In medieval England, everyday use versions included Susanney and Susan, and even diminutive Sukie.  But she wasn’t super common, and it would take a few more centuries for her to catch on.

Plenty of notables have answered to the name – trailblazing suffragette Susan B. Anthony comes to mind. My first thought is always Susan Dey, the actress who started out as Laurie Partridge in 1970 then went to college, law school, and ended up as Grace Van Owen on L.A. Law in 1986.  Dey is the perfect age for a Susan – born in 1952, a teenager by the late 1960s, and then a power-suited young attorney exactly on time.

But by the 1980s, she was headed for mom named territory … now famous bearers of the name Glee’s take-no-prisoners Coach Sue Sylvester.

Terry Pratchett gave the name to the Grim Reaper’s granddaughter in his Discworld series.  You’d expect someone who can walk through walls and remember the future to be rather remarkable.  She is – and yet her name is sensible, “a name used by no queens or goddesses anywhere.”

Or is it?  Fiction gives us Susan Pevensie of The Lion, Witch, and the Wardrobe.  She’s a level-headed schoolgirl when the story begins, but ultimately takes her place as Queen Susan of Narnia.  And the lovely Brooke Shields played a rather glamorous bearer of the name on 1990s sitcom Suddenly Susan.

Reinventing her is very possible, from the daring Siouxie Sioux of the Banshees, to Sookie Stackhouse to Zuzu, as in the little girl in It’s a Wonderful Life.

In 2012, she ranked a chilly #712.  And yet I find her strangely appealing – as tailored as Peyton, with the oo of Lucy and Jude, plus a subtle floral vibe and all that suffragette style.

If Susan hadn’t been so huge in the recent past, she’d be a smash hit now.