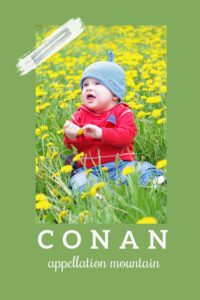 The baby name Conan started out a saintly Irish name, took a turn towards the barbarian, and now might be ready for reconsideration.

Thanks to Violet for suggesting our Baby Name of the Day.

The baby name Conan is Irish. It means little wolf – just like Ronan is little seal and Aidan is little fire.

A handful of early Irish saints answer to the name, dating to the sixth and seventh centuries.

Geoffrey of Monmouth tells us that Conan Meriadoc founded Brittany.

While there may be some historical evidence, it’s generally considered a legend.

It factored into politics, though, with powerful Breton families using descent from Conan as a reason to establish their rule.

During the 990s, Conan I of Rennes became the first Duke of Brittany. At least three of his successors also answered to Conan into the 1100s.

Few characters are as immortal as Sherlock Holmes, re-invented generation after generation. The author lends the baby name Conan a sort of sharp, literary energy.

You might also hear the baby name Conan and automatically add “the Barbarian.”

In the 1930s, writer Robert E. Howard created Conan the Cimmerian in a series of stories for the magazine Tales of the Weird. Howard’s Conan used his strength and cunning to win all sorts of fights. Sometimes a pirate or part of a robber band, Conan eventually became a king.

Howard set his adventures in a fictional world not unlike our own. He even wrote a detailed history to help center Conan’s adventures.

After Howard’s death, other writes picked up the character.

In 1982, a young Arnold Schwarzenegger starred in the title role. Conan the Barbarian was a hit, combining elements from different Conan tales. A 1984 sequel followed.

Jason Momoa hefted the sword as a new Conan in 2011, but the reboot was far less successful.

Schwarzenegger’s performance defined the name for much of the 1980s and 90s. It took the baby name Conan away from its Irish roots and medieval history and placed it in the realm of fantasy.

The baby name Conan never caught on in the US.

Most of the name’s use seems to be tied to Howard’s character. 1982 – the year the first movie premiered – marked 40 newborn boys named Conan, a peak. 54 boys received the baby name Conan in 2012, a year following the reboot.

But the name’s image has shifted in recent years, too, moving away from a sword-wielding, muscular hero and taking on a lighter vibe.

Irish-American comedian Conan O’Brien takes the name back to its roots.

The Harvard alum worked as a writer for Saturday Night Live and The Simpsons before getting his first late night talk show in 1993.

He’s been on television nearly ever year since, and is currently working on a new show for HBO Max.

O’Brien makes the name a little bit intellectual, quite current, and restores its Irish roots.

While we all recognize the baby name Conan, nearly no one is using it. As of 2020, just 62 boys received the name.

That’s not zero, but it’s quite rare.

Conan would fit right in with Cole and Rowan, Carson and Owen.

What do you think of the baby name Conan?

First published on December 23, 2011, this post was revised substantially and re-published on November 30, 2021. 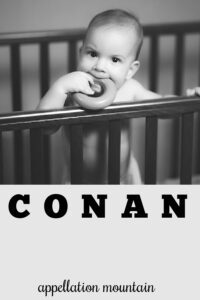