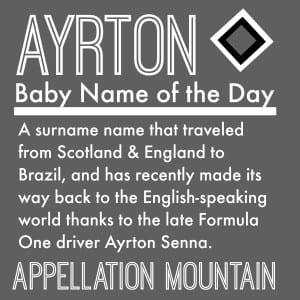 surname name with an on-trend sound.

Thanks to Kenneth for suggesting Ayrton as our Baby Name of the Day.

Let’s start with the most famous bearer of the name: Ayrton Senna, one of the most successful Formula One drivers of recent decades.

Senna was born in Brazil, a bastion of creative and daring baby names.

He won three Formula One world championships before dying in an accident during the 1994 San Marino Grand Prix.

A 2010 documentary made in his native Brazil recounted his career and tragic death.

But where did Senna get his unusual first name?

I couldn’t find any mention of Senna specifically, but Ayrton is a surname name.

It could be a cousin to Ayer and Ayers, from the word heir, ultimately from the Latin heredum. An heir is one expected to inherit property, a title, or both.

And then there’s Ayr, the Scottish place name. Ayr is a town in Ayrshire, Scotland. Other spellings include Are, Aire, Ayre and Eyre – as in Charlotte Bronte’s Jane Eyre. The town takes its name from the River Ayr, and the river’s name is thought to come from either a Gaelic word meaning clear, or possibly Old Norse origins.

Senna also isn’t the first Brazilian to wear the name. Footballer Ayrton Andrioli was born in 1965, well before Senna.

Other notable men by the name were born in the 1980s, just as Senna’s career was taking off:

I’m missing exactly how this English-Scottish surname name made its way to South America. But travel it did, and perhaps Brazil is ready to send the name back to the English-speaking world today.

Jules Verne’s In Search of the Castaways, published in 1873, included a character called Tom Ayrton. He’s the villain of the piece. Tom also appears in Verne’s 1874 novel The Mysterious Island.

In 1962, Disney adapted Castaways as a musical starring Haley Mills. It was successful, raising the question – did some parents discover Ayrton through the books or their adaptations?

Ayrton: In the US

It doesn’t look like Jules Verne or Disney gets credit for the name’s use in the US. The first few Ayrtons arrived in the mid-1980s, just as Senna’s career was taking off.

None of the other possible spellings has caught on.

But speaking of spellings, the -ton ending appears to be on the rise:

All of this makes Ayrton a real possibility for parents after something different for a son in 2015.