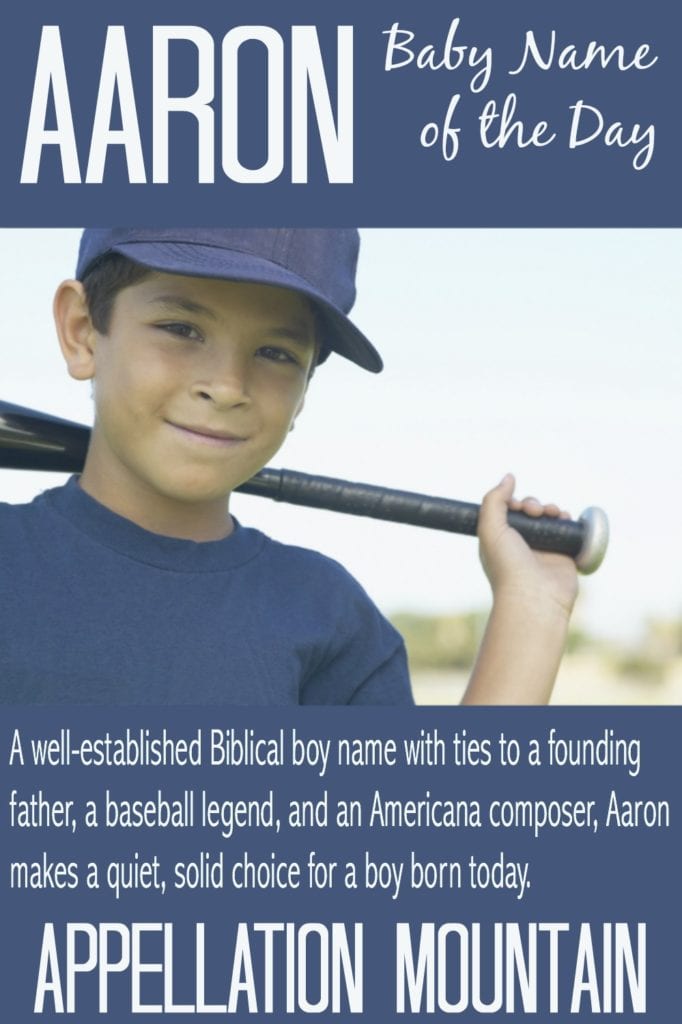 We love A baby names, so Aaron must top the list, right?

Top 100 month continues with Aaron as our Baby Name of the Day.

In the Old Testament, this name belonged to the older brother of Moses. Moses, of course, grew up in the Egyptian court, while at least two of his siblings lived in Goshen, on the border.

When Moses learned that the priesthood would be given to himself and his male relatives, Aaron became the first High Priest of the Israelites.

In Hebrew, the name is Aharon. Various meanings have been suggested, but it is likely that the name comes from an Egyptian source – mostly unknown today.

It’s among the many Biblical names rediscovered following the Protestant Reformation.

In the US, the most famous bearer of the name has returned to the spotlight. Smash hit Broadway musical Hamilton tells the story of the Revolutionary War, scrappy Alexander Hamilton’s rise to power, and his friendship-turned-rivlary with fellow politician Aaron Burr.

Burr and Hamilton served together in the Continental Army. Burr went on serve as the third Vice President of the United States, under President Thomas Jefferson.

Here’s the thing: Jefferson planned to oust Burr when he ran for re-election. So Burr ran for governor of New York instead. During that election, Alexander Hamilton campaigned against Burr, endorsing Morgan Lewis, who won in a landslide.

All of the ugliness led to Burr challenging Hamilton to a duel. Most states had outlawed dueling by then. But the men met anyway, and Burr landed the first shot.

While he won the duel, it cost Burr his political career.

The famous feud between Founding Fathers never really tarnished the name the way that, say, Benedict Arnold’s actions made his name less wearable.

Other notable bearers come to mind, including composer and later conductor Copland. His subjects are quintessentially American: Billy the Kid, Appalachian Spring. My favorite is “Fanfare for the Common Man” – a work inspired by the US entry into World War II.

Another notable is Major League Baseball’s Hank “Hammer” Aaron. Hank played 21 seasons for the Milwaukee/Atlanta Braves, and he still holds several records from the era. The Hall of Famer has worked for the same organization since retirement.

Such a towering figure in sports lends something more to the name.

You might know that this is Elvis Presley’s middle name. It was spelled Aron on his birth certificate, but Presley strongly preferred the Aa spelling.

In Scandinavia, Hungary, and Poland, Aron is preferred. It’s also seen in the US, though never in significant numbers.

Steinbeck’s East of Eden gives us a dutiful Aron, brother to rebellious Cal. It’s a Cain and Abel story. When the novel was adapted as a movie in 1955, James Dean played Cal, and Richard Davalos, Aron.

You might think of other notables. There’s actor Eckhart, screenwriter Sorkin, and television producer Spelling. The late Spelling is, of course, dad to Tori and grandfather to Liam Aaron.

Seldom in the spotlight, the name has been given to fictional characters from  Shakespeare to Pokemon. It’s a solid choice for a boy, never flashy, but not as expected as William or James.