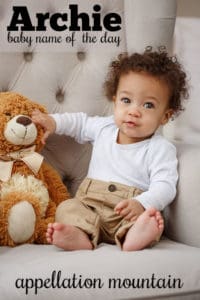 Archie takes center stage, in honor of the newest member of the British royal family.

With congratulations to the Duke and Duchess of Sussex, let’s talk about our stylish Baby Name of the Day.

There’s something Scottish about Archibald, but that doesn’t quite reflect the name’s roots. It comes from Germanic name elements, the first meaning true; the second meaning bold. That feels rather auspicious. The spelling changed to reflect the Greek archos – master.

It all makes this name rather grand.

Scottish aristocratic families favored the name, and it’s filtered into use as a vaguely privileged and sophisticated choice. Think of Gossip Girl’s Nate Archibald, and a bunch of real-life members of the Roosevelt family, too. And, of course, it’s the birth name of debonair Hollywood leading man Cary Grant – who started life as Archibald Leach.

A handful of uses come to mind, but the comics give us one of the most enduring: Archie Andrews, of Riverdale. We met him way back in 1941. (Fun fact: his first nickname was Chick.) He’s an athlete and lead singer of a band. His affections waver between Betty and Veronica. And, over the last eight decades, he’s had all sorts of adventures – in the comics, on the radio, and now on television.

The CW’s Riverdale has given the series a whole new vibe, with KJ Apa starring as the red-headed lead character.

In between the comic strip’s debut and the small screen reboot, this name picked up a handful of other associations. Maybe the best known one came courtesy of another television character, the legendary Archie Bunker of All in the Family. Played by Carroll O’Connor, the lead character of the 1970s hit sitcom was rude, aggressive, opinionated, sexist, and racist.

I suppose Bunker reflected his era. It’s also true that many storylines demonstrated his ability to change and grow.

The show became a massive hit, and Carol O’Connor a major celebrity. It likely explains why the fading name finally fizzled in the 80s.

But with the passing of five decades, the reference isn’t familiar to most parents today, which frees us to think about the image of Archie in a fresh light.

It’s part of a wave of nickname-names, casual and cozy favorites like Alfie, Frankie, and Harry that are all the rage.

Archie has ranked in the English Top 20 in recent years. British Baby Names puts it on a list of Lively Lads names, along with Dexter and Jack.

While it’s perceived differently in the US, it’s worth noting that Archer is rising up the US popularity charts at a fast pace. The occupational surname went from unranked in 2008 to just outside of the current Top 250. That suggests that parents are warming to a similar sound in the US, too.

The Next Big Thing

Now that Harry and Meghan have chosen the name for their son, the question is whether it will catch on in the US.

As is the case with Will and Kate’s kids, the name is already mainstream in the UK, making it tough to guess how much a royal baby might impact parents’ naming decisions. But in the US? I can see the choice proving influence, just like George has moved up the popularity charts over the last few years.

It might make a great alternative to Henry and Theo, now that they’re both so very popular, too. And with Riverdale so popular, this may be perceived as much more than just another royal baby name.

What do you think: is this name going to catch on?