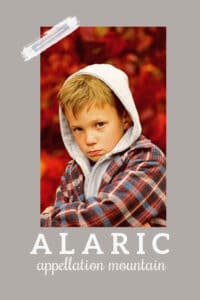 Thanks to Charlotte Vera for suggesting our Baby Name of the Day, and Nicole for requesting the update.

KING OF THE VISIGOTHS

The baby name Alaric is Goth.

Alaric I ruled the Visigoths early in the fifth century, establishing a new royal line and invading the Eternal City of Rome in the year 410.

He was a big deal back then, and you’ll find references to King Alaric in art and literature through the ages.

Alaric II came along a few decades later, in 485. In between the two Alarics, Gesalec, Sigarec, Wallia and Thorismund held the throne, among others.

Very few Visigoth names have stood the test of time.

The Ynglinga saga, written around 1225, tells the brothers’ story. Their father left his kingdom to them jointly. They were forever competing, particularly on horseback. One day they rode off, never to return. Their bodies were later discovered. It looked as if they’d quarreled and taken their sparring too far – but it remained a mystery.

Alaric’s sons succeeded their father and uncle as co-rulers, presumably with more success.

Other versions of the tale have Eric surviving.

It’s worth noting that stories about brothers competing are a tale as old as time. So were real world rivalries, and it’s possible that this tale was based on historical events.

Plenty of Swedish monarchs have been named Eric, as have some in both Norway and Denmark.

Despite many variants of Alaric, they all seems to lead back to the same roots: Alareiks. That includes not just the various Scandi respellings, but similar names like the German Alarich.

While the meaning is sometimes given as “noble ruler,” the first half probably means “all,” from ala. A handful of other names share this origin, too. Assuming that’s the case, the baby name Alaric means “ruler of all.” (The –ric ending, meaning ruler is undisputed.)

But Alaric is the exception. He sounds like a three-syllable combo platter made up of Eric and Alan, but he’s actually from the Germanic elements ala – all and ric – ruler, or something like “king of all.” It’s a fitting name for the founder of a dynasty.

The baby name Alaric sounds like a mash-up of first names formerly popular for boys, like Alan and Derek.

Except it’s clear that the name has remained in sparing use across the centuries.

The British Navy used Alaric for a submarine late in World War II, and at least one Alaric has served the US military with distinction – back during the Civil War, Union Army officer Alaric Chapin was awarded the medal of honor.

But most modern parents probably discover Alaric in the pages of a book. If not history, then fiction:

But all of these were mere ripples compared to a more recent use of the name.

Television series The Vampire Diaries has popularized many a name. There’s Elena, of course, as well as Amara and Enzo and Atticus.

The series debuted on The CW in 2009. It ran through 2017, followed by spin-offs The Originals and Legacies. While Legacies recently ended after four seasons, vampires live forever.

And Alaric Saltzman has been part of the story from the beginning, appearing in all three of the series, as well as the original novels on which they are based.

And he’s supposed to kill one of the vampires at the heart of the series.

Keeping this spoiler-free, let’s just say that Mr. Saltzman has many an adventure across the years, mostly – but not exclusively – supernatural.

In 2009, when The Vampire Diaries first aired, just 27 boys received the name Alaric.

Here’s the challenging thing about Alaric: it sounds a little bit like familiar boys’ names. Alec, for one, or even Asher or Maverick. But it also reads a like a medieval antique, too, more akin to Ulrich than a modern name for a son.

Then again, we’ve embraced choices like Gavin and Tristan, Sebastian and Julian, Romeo and Orlando. A barbarian king doesn’t really seem out of place.

Alaric might be shortened to Al or Ric/Rick or possibly Aric, but most parents would probably use it in full these days.

If choices like Caspian and Horatio dot your list, odds are that the baby name Alaric might appeal to you, too. In this case, the name’s slight uptick in popularity could be a bonus. It could mean fewer awkward misspellings like Allaric and Aleric, while still being seldom repeated or shared.

It could be a great choice for parents seeking a boy’s name that feels distinctive but not invented, and one with centuries of history behind it.

What do you think of the baby name Alaric?

First published on November 20, 2009, this post was revised substantially and re-published on August 23, 2022. 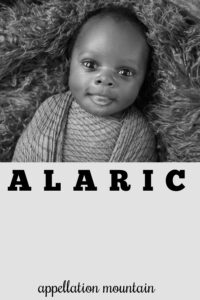 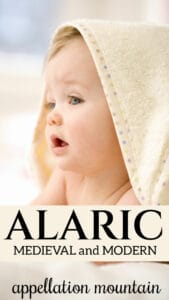