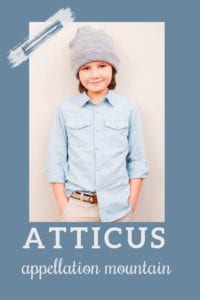 The baby name Atticus came from the ancient world by way of twentieth century literature to stand as one of the most stylish choices of our moment.

Thanks to Jasmin for suggesting our Baby Name of the Day.

How did a 1960 novel and its accompanying 1962 film adaptation become one of the hottest sources of baby name inspiration in the twenty-first century?

It’s not until 1969 that seven boys receive the name – just enough for it to register in the US Social Security data for the first time since 1881.

Instead, Atticus – along with Harper, the author’s name – started to rise in the 1990s. The numbers are tiny at first.

It seems like the slow rise is thanks to how many people read To Kill a Mockingbird over the years, and how deeply they admired Atticus Finch.

If you don’t know the story, here it is: Jean Louise “Scout” Finch narrates the story. It’s 1936 – the Great Depression – and she and her brother Jeremy “Jem” are growing up in a small Alabama town, raised by their widowed father, Atticus. Atticus is a lawyer, appointed by the local judge to defend Tom Robinson, who is accused of raping Mayella Ewell. Tom is black; Mayella is white. That’s all most of their neighbors need to know. It’s clear that Mayella’s story doesn’t hold up, but Tom is convicted anyway.

The novel is among the most widely-read by high school students. Oprah Winfrey has long talked about how much she loved the book. The Library of Congress’ One Book, One Community program launched in 1998; Lee’s novel is almost certainly the most often selected.

There’s no question that Atticus Finch is principled; beyond what many of us can imagine for his time and circumstances.

And that’s appealing to parents. The 1990s kick-starts the age of purpose names – a mix of nature names, like River and Kai, new virtue choices like Destiny and Journey. Some, like Harmony, would’ve been at home in the 1960s. Others, like Zion, feel very twenty-first century ready.

Atticus fits for two reasons – first and foremost, for the literary associations. But look up the meaning of the baby name Atticus, and a second association emerges.

The name comes from the Latin, meaning “from Attica.”

Attica is the region around Athens, the center of the world in the classical era. A handful of accomplished ancients wore the name, too.

But Athens also serves as shorthand for a Golden Age of philosophy and literature. It’s no mistake that we know Athena as the goddess of wisdom, as well as patron and protector of the city.

The name wasn’t entirely new when Harper Lee chose it for Scout’s father. But it was rare, and spoke to his character in a subtle, but powerful, way.

In 2010, the novel celebrated its fiftieth anniversary. The baby name Atticus stood at #560. Harper reached #120 for girls.

It wasn’t just the novel, though. Ancient boy names, ending with -s, were enjoying a moment. Names like Maximus and Julius rose, too, creating space for Atticus to feel like a wearable choice for a son.

Perhaps one of the most interesting facts about To Kill a Mockingbird is that it was Harper Lee’s only novel. (She once told Oprah Winfrey that she “said everything she had to say” in that one book.)

In 2015, a sequel of sorts was released. Go Set a Watchman was discovered by Lee’s attorney the year prior, and subsequently published to much fanfare. It’s again told from the perspective of Scout, returning home to Alabama twenty years later. Atticus isn’t nearly as noble – or perhaps he’s simply seen as human, rather than a heroic figure, now that his daughter is an adult.

Lee passed away in 2016, and controversy swirled over the publication of Go Set a Watchman. Some parents of boys named Atticus worried that it tainted the name.

However, after a tiny slide backwards, the baby name Atticus continued to rise. As of 2019, it reached #309. That represents nearly 1,100 births – an all-time high.

The first season ended with strong ratings and critical applause. No word on a future season. One issue? Lovecraft Country was based on a Matt Ruff novel, and the season’s ten episodes covered everything he wrote.

Whether the story continues or not, this adds a very different – but equally admirable – Atticus to the roster.

For many families, Atticus hits the trifecta. It’s a stylish name, on trend but with so much history that you’d never call it trendy. The name’s literary roots are immediately obvious to nearly everyone. And it conveys meaning – a mix of courage and principle that we all wish for our children.

The baby name Atticus feels like a strong choice for a son in the twenty-first century.

What do you think of the baby name Atticus? Would you consider it for a son?