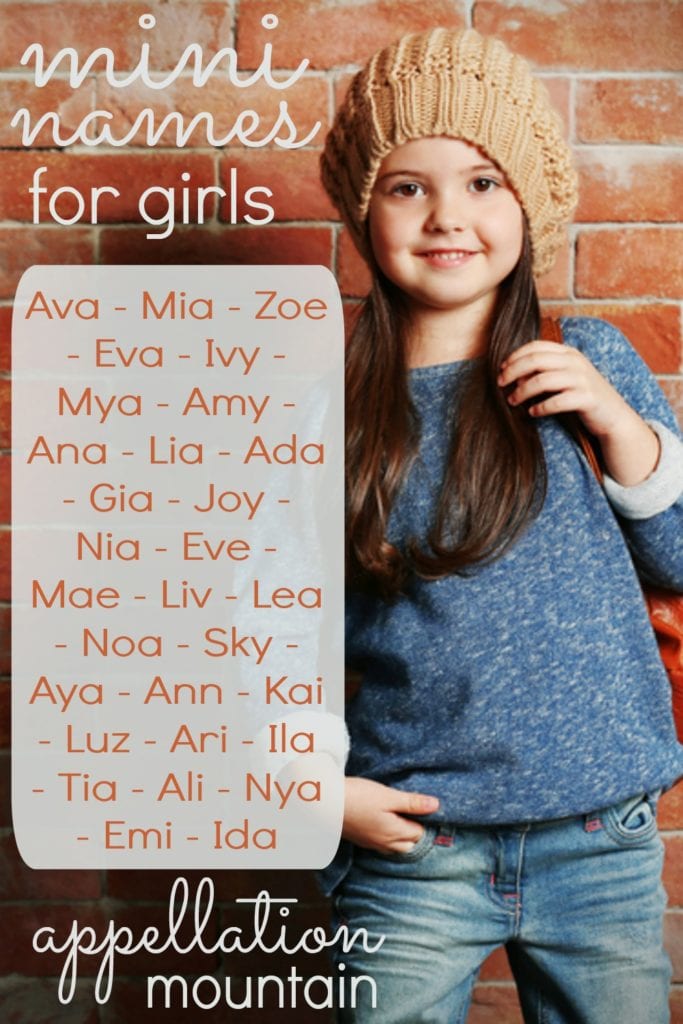 Mini names for girls range from the modern to the vintage, the edgy to the sweet.

But the very nature of mini names means that there are only so many. I’ve defined mini names for girls as names with two or three letters, max.

The 30 most popular mini names for girls all come in at three letters. But don’t let “most popular” fool you! Only the top four make the Top 100. And towards the end of the list, we’ve left the Top 1000 entirely.

Ready to review the biggest of the mini names for girls? Read on!

Ava – The #4 name for girls in the US combines glamour and simplicity. Ava languished in obscurity during the 1970s and 80s, but rocketed to the top after a string of celebrities chose the name, especially Heather Locklear in 1997, and Reese Witherspoon in 1999.

Mia – Mini Mia succeeds with speakers of English and Spanish – a reason this little name has had big impact. Rewind to 1963, and the name was nearly unknown. Then young actress Mia – born Maria de Lourdes – Farrow – starred as Allison MacKenzie on Peyton Place. The show was a major sensation, and Farrow’s first name caught on quickly. All these years later, Mia ranks #6.

Zoe – At #33, Zoe is pretty popular – but Zoey-with-a-y actually ranks #23. From the Greek word for life, Zoe combines ancient roots and a modern sound.

Eva – At #75, Eva finishes off the mini names for girls currently ranked in the US Top 100. Ev- names are having a moment, and longer options abound – from Evangeline to Evalyn to some far more obscure possibilities.

Ivy – Once dismissed as poisonous, Ivy now ranks #129 in the US. Credit our love for nature names, that great ‘v’ sound, and, of course, Beyonce’s Blue Ivy.

Mya – Mya ranks #146 right now, but I’ll admit I find it confusing. Does it sound like Mia or Maya? I assume it is the first, but then Mya Harrison singer – who is usually known just as Mya – pronounces her name like Maya. Since it the singer’s popularity that boosted the spelling, maybe that’s the most likely option.

Amy – It’s a mini name and a Little Women name, too. The former Top Ten favorite now ranks just #158. But with a great meaning – beloved – and a long history of use, this name will probably make a comeback.

Ana – It doesn’t get much more classic than the Ann- names. At #211, Ana trails Anna and even Annabelle in the rankings, but remains quite popular. The single ‘n’ spelling is preferred in Spanish, but also several Slavic languages.

Lia – Biblical and classic, Leah belongs to the current Top 40. Modern re-spelling Lia comes in at a distant #329. But it’s not necessarily just a creative twist on a traditional name. Lia can also be short for any of the many names ending in -lia. Or it might be the preferred spelling in some languages, like Italian.

Ada – If Ava feels glam, Ada is much more homespun. But it’s also the name of Ada Lovelace, daughter of Lord Byron and pioneering computer programmer, centuries before such a thing even existed. At #357, Ada remains far behind Addie names like Addison and Adeline, as well as Ava – but that’s not necessarily a bad thing.

Gia – If Mia and Lia make the list, why not Gia? It serves as a short form of Italian names like Giovanna, but is bestowed independently, too. Gia Carangi became one of the first supermodels in the late 1970s. You might recall a young Angelina Jolie playing Carangi in a 1998 HBO biopic, titled just Gia. Today it stands at #373.

Joy – Frills-free and upbeat, Joy might have felt dated until 2015’s Inside Out gave us an irresistible character by the name. Amy Poehler voiced Joy, one of the emotions inside 11 year old Riley’s head. Now the name stands at #435, still much less popular than it was in the 1950s, 60s, and 70s, but still up slightly. Another factor? Jennifer Lawrence’s turn as entrepreneur Joy Mangano in late 2015’s Joy.

Nia – The fourth of the consonant-plus-ia mini names for girls is Nia. Unlike Mia, Gia, and Lia, this one begins as a truly independent name. It means purpose in Swahili, and is one of the seven principles of Kwanzaa. That makes this a cousin to Joy as much as Mia. At #442, Nia remains relatively rare, but has been used steadily since the 1990s.

Eve – Just three letters and only one syllable, Eve can feel shorter than Zoe or Ava. At #475 last year, it’s also much less common than Eva. Eve brings to mind the Biblical figure, but also anticipation – think of New Year’s Eve.

Mae – Mae West takes gentle nature name May and makes it sassy and retro. Sometimes used as a short form of Mary and Margaret, Mae stands independently, too. The name ranks #588 as of 2015.

Liv – At #720, Liv belongs on the list of up-and-comers. While it might be short for Olivia and friends, Liv also has independent Norse roots. It mirrors a modern Scandinavian word meaning life, just like fellow mini name Zoe.

Noa – At first glance, it’s another case of borrowing from the boys. But Noa appears in the Bible as a feminine name, too – with separate roots from the masculine Noah. At #761, this name is just gaining traction in the US. But it’s been a major favorite in Israel, and elsewhere in the world, for years.

Sky – Skylar, Skyler, and Skye all chart much higher, but #768 Sky is the only three-letter name that marries a current sound with the idea of sunny blue skies together. Skylar, of course, might simply be a respelling of Dutch surname Schuyler – meaning scholar – but that association seems lost.

Aya – Another of the mini names for girls with a global vibe, Aya claims Japanese roots. Other origins have also been suggested. It ranks #886 in the US, but has charted in the Top 100, or higher, in Spain, Belgium, Denmark, and France.

Ann – If you love your Anne of Green Gables, Ann might look plain wrong to you. Anne explained to us, “… A-n-n looks dreadful, but A-n-n-e looks so much more distinguished. If you’ll only call me Anne spelled with an E I shall try to reconcile myself to not being called Cordelia.” At #893, most parents prefer any of the other Ann- names, too, but the simplicity of the e-free version retains its own kind of appeal.

Kai – Fifty years ago, no one in the US answered to Kai – male or female. Now the Hawaiian name meaning sea has become established for boys, and is gaining for girls, too. At #893, you more likely to meet a Mae, but Kai appeals for many of the same reasons.

Luz – From the Spanish word for light, Luz often appears as a compound name with Maria. But it is sometimes used on its own, enough to appear at #957 in the current US rankings.

Ari – And with that, we leave the official US Top 1000! Ari was given to 264 girls last year, putting it just outside the charts. The name might be short for Ariana or any of the other Ari- names so popular today. But it can also stand on its own. In Hebrew, it’s a masculine name meaning lion.

Ila – Over 200 girls were named Ila last year. That might be because Ila has roots in Sanskrit. It could be a simplified spelling of Isla. Or maybe it’s something else – after all, Ila appeared in the US Top 1000 every year from 1880 into the 1950s.

Tia – Right behind Ila is Tia. Tia belongs with Mia, Lia, Gia, and Nia except it’s also the Spanish word for aunt. Celebrities like Tia Mowry and Tia Carrere – born Althea – boosted the name in the 1980s and 90s.

Ali – When heard on a boy, Ali comes from Arabic, and means lofty. On a girl, Ali probably serves as a slimmed down version of Allie, the first few letters of Alison or Alicia. It’s not terribly common, but was given to 188 girls last year.

Nya – Nya shares the same challenges as Mya. In Lego Ninjago: Masters of Spinjitzu, Nya is sister to Kai. While the series starts out with Kai as the ninja, Nya boasts skills of her own.

Emi – Emi is to Emmie as Ali is to Allie. Or not. Because Emi also derives from a Japanese name. It can be short for Emiko, or stand on its own. 166 girls were named Emi last year.

Ida – If mini names for girls are hot, Ida ought to be more popular! It was given to just over 150 girls last year. The name came to England with the Normans. It means work, and also is the name of a mountain in Crete where myth tells us that Zeus was born. Ida boomed in the 1880s, thanks to a Tennyson poem and a Gilbert and Sullivan operetta. There were real-life princesses by the name, as well as muck-racking journalist and reformer Ida Tarbell.

What are your favorite mini names for girls? Are there others that you’d add to this list?