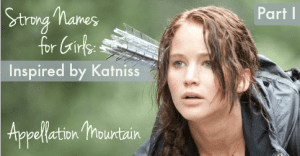 This post was originally published on February 10, 2012. It was substantially revised and re-posted on October 13, 2015 – with new names added, too!

There are many kinds of strong names for girls. There are the Hermiones – clunky and smart and unexpected. There are the Eleanors – impeccably classic, tied to strong women from history.

And then there are the Katniss names.

Katniss Everdeen, hero of The Hunger Games trilogy, has much in common with Hermione Granger. They make difficult choices in impossible circumstances. They’re courageous, and it’s no wonder that their names make strong names for girls.

But while Hermione’s name is rich with history, Katniss is not. It’s modern, but not invented. Feminine, but not obviously so. Both kinds of names make for strong names for girls. But while Miss Granger is more about intellect, Miss Everdeen is characterized by almost preternatural instinct.

Here’s a list of names that are inspired by Katniss. They’re bold, strong names for a girl, a little bit modern and often tied to the natural world. If you’re after a stand-out name for a girl that has a touch of the fierce and fearless about it, this list is for you.

Strong Names for Girls: A through D

Adair – A new addition to the list, Adair is part-surname name, part-alternate form of Edgar. If you remember the television series Dead Like Me, one of the characters was called Daisy Adair. It’s a daring, bold name, and while there’s history to Adair, it also feels fresh, modern, and unexpected, just like Katniss.

Aderyn – Katniss is an underdog from a remote part of her world. Like District 12, modern-day Wales is a bit off the beaten path. And so Welsh names feel like an obvious choice. Aderyn is a modern Welsh name meaning bird. It’s one of the rarer possibilities on The Great Big List of Bird Names for Girls. Call her Addie and she’ll blend in, but Aderyn is a stand-out.

Alix – Naming your daughter Charlie or Evan doesn’t make the list, but Alix does. A medieval French variant of Alice worn by European royals into the twentieth century and still in use in France today, Alix splits the difference between borrowing from the boys and finding a feminine name with a unisex sound. Alice went to Wonderland, but Alix feels like the kind of name that could go anywhere.

Briar – Like Katniss and Aderyn, Briar makes for a frills-free nature name. This one only counts, however, if you resist the urge to pair it with Rose, the original name of fairy tale princess Sleeping Beauty. The image of a thorn-filled briar patch fits right in with Katniss.

Carys – Several of you suggested Carys as a Katniss name, and I think it fits. Like Aderyn, Carys is Welsh, and quite rare in the US. The meaning – love – is a straightforward one. And Carys is a relatively modern name, not used until the twentieth century.

Clio – Full disclosure: this is my daughter’s name. Since Clio is originally a Greek muse, she almost qualifies for the Hermione list. Except that -o ending screams modern, especially for girls. Spell it Cleo and she’s a legendary Egyptian queen with a thing for eyeliner. Similar in sound to the mega-popular Chloe, Clio is different, but still recognizable.

Echo – Like Clio, she’s not really new. But the Greek nymph’s name sounds ever so modern. Layer in the tough-as-nails character Eliza Dushku played on short-lived Fox-series Dollhouse and Echo resonates.

Elke – A short form of Adelaide whispered down the alley, this noble name is a cousin to fellow list member Alix, as well as an unrelated Hebrew name. Elke makes the list for two reasons – the name is short and high energy, but there’s also her resemblance to the mighty elk. Names like Fawn are sweetly feminine, but Elke has an edge.

Ever/Everild – Depending on your perspective, Ever is either a modern word name or a traditional name that coincidentally resembles the adverb. Everild is one form of an old saint’s name referring to battle. Both feel distinctively modern and sharp, and bring to mind Katniss’ last name – Everdeen.

Gates – Gates is the cool girl in Curtis Sittenfeld’s novel Prep. It’s an interesting name, conjuring up medieval walled cities and gatekeepers of all sorts. It’s probably the least name-like of any name on this list, but I think it fits with the other strong names for girls. Hero – I was reluctant to include Hero at first. The character in Shakespeare’s Much Ado About Nothing wasn’t especially bold. The original Hero, the lover of Leander in Greek myth, may have been more daring. That’s more history than most Katniss names, but using the same logic applied to Clio about a modern sound, Hero made the cut.

Honor – There’s something almost vintage about Honor. It’s a word name, though maybe not a word that we use easily in 21st century speech. Jessica Alba gave the name to her daughter, raising the name’s profile. But Honor isn’t new, and variations like Honora and Honoria can be found through the ages. Still, Honor strikes the right note for a frills-free virtue name that captures some of the best of Katniss.

Strong Names for Girls: I through L 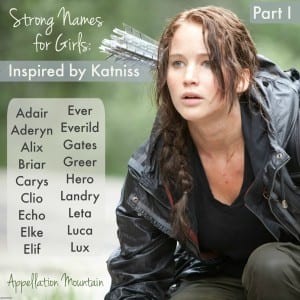 Jennifer Lawrence stars as ‘Katniss Everdeen’ in THE HUNGER GAMES.

Landry – Now considered a surname, but originally a given name worn by a trio of medieval saints, Landry was one of several similar names on the very first draft of this list. Hadley and Langley were both cut, but something about Landry endures. While the original Landrys were male, and typically appear in the historical record as the Latinized Landericus, the name hasn’t seen much use in our era, making it fair game for both genders.

Leta – Similar names and alternate spellings include Leto, Leda, and Lida. Yes, it conjures up swans and Spartan queens, but also rock icon and Runaways alum Lita Ford. Lila and Lily are lovely, but Leta is fierce. Original mama blogger Heather Armstrong has a daughter named Leta Elise. It’s also proof that strong names for girls can end in -a.

Luca/Lux – Luca is a traditional boy’s name in most languages, and lux is the Latin word for light. Both have made occasional appearances on the girls’ lists. Luca is the middle daughter of actors Jennie Garth and Peter Facinelli, and also a Hungarian form of Lucia – currently quite popular. Lux is among the troubled sisters in Jeffrey Eugenides’ grim and grisly novel-turned-movie The Virgin Suicides. We love Lucy and all of her many elaborations, but she’s not quite a Katniss. Luca and Lux are – the feminine equivalents of another young hero, Luke Skywalker.

Lyra – It’s a night sky name, and also a musical one – the constellation is named because it resembles the shape of Orpheus’ lyre. I’m torn about including Lyra as a Katniss-inspired name, because Lyra belongs to an equally capable fictional heroine: Lyra Belacqua, of Philip Pullman’s His Dark Materials trilogy. Maybe there should be another post called the Lyras!

What names have I missed? What should be included on the second half of the list? Do you think these are strong names for girls? And would you use any of these names, or are you more of a Hermione type?