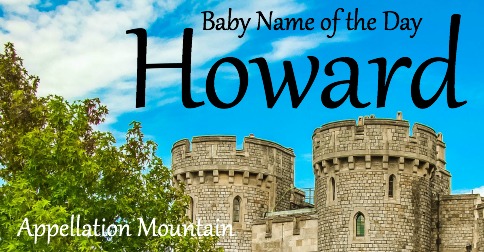 Howard used to be Richie Cunningham’s dad. Could it now be the newest revival name for boys?

Howard was the Logan of an earlier age. Or maybe the Ryan.

The character lends the name all sorts of positive attributes – it’s warm, approachable, and a little bit Americana. 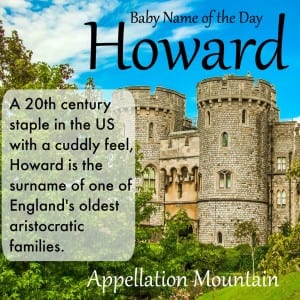 Except that Howard’s roots are miles and miles away, across an ocean from Milwaukee, Wisconsin.

It started out as a surname, probably from an older given name. It could mean brave; it could mean heart. The first element might mean army. The -ward ending often refers to a ward or guard.

Hereward the Wake rallied resistance to the Norman invasion in the eleventh century.

The Howard family rose to power in the 1500s. (Or maybe sooner. Some accounts say that they’re descended from Hereward himself!) They’ve been the Dukes of Norfolk ever since, and the family appears in many chapters of English history. Catherine Howard became the fifth wife of King Henry VIII. Lord Admiral Charles Howard led the English fleet that defeated the Spanish Armada.

Arundel Castle is the family’s ancestral home. It’s picture in the illustration for this post.

Then there’s Howard Hughes, the entrepreneur, inventor, filmmaker – and speaking of film, an aviator. Back to that in a minute.

Hughes made big budget Hollywood movies in the 1920s and pioneered aircraft design in the 1930s. But he was also known for his eccentricities later in life.

In 2004, a biopic starring Leonardo DiCaprio as Hughes was released. The Aviator racked up eleven Academy Award nominations.

Then there’s Howard the Duck, of Marvel Comics fame. He first appeared in 1973, a duck from outer space who comes to Earth and has adventures. It became an unsuccessful movie in 1986.

It wouldn’t merit a mention, except. At the end of the smash-hit 2014 Guardians of the Galaxy, the duck appeared in a post-credits scene. It hints that the character could make an appearance in a future Guardians movie – or another Marvel flick. After all, Guardians was a success with genetically engineered raccoon called Rocket.

Forget the duck and even the aviator. There’s no shortage of notable Howards over the years. I always think of 1980s pop singer Jones. Archeologist Carter found King Tut’s tomb, and there’s sports journalist Cossell, shock jock Stern, and historian Zinn. It’s the H in HP Lovecraft. It’s also Anne Rice’s given name, after her dad!

The name may be in the early stages of a comeback, along with other traditionals like Arthur, Winston, Harvey, and Clyde. Or it may be the weight of tradition buoying the name up – it was given to 208 boys in 2014, down from 270 in 2000, but enough to nudge in back into the Top 1000.

Still, there are reasons to think that this name could wear well in 2016. It shares the long o sound of Logan, Owen, and Rowan. Nickname Howie sounds upbeat. I’ve also heard Hoby, which modernizes it even more.

Howard is a classic with a cuddly feel, and plenty of history and strength, too.

Do you think Howard is ready for revival?