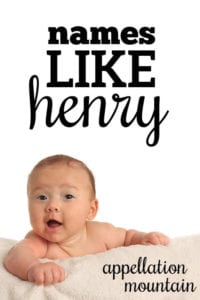 Not so long ago, Henry occupied a special place. It felt classic, but still cool. Traditional, but a little bit quirky, too.

But today, it’s everywhere, the go-to choice for parents looking for a name that balanced the best of the past with a little bit of an edge. Your Henry might be an accountant or an indie rocker, an athlete or a surgeon.

Time to look for some fresh possibilities that share the same quality.

Names like Henry feel versatile: cute on a child, accomplished on an adult. They’re not new, but we may hear them as fresh and unexpected today. And lots of parents love this style. Just look at the name I used to suggest as a Henry alternative: Oliver. It now ranks in the US Top Ten!

These dozen names aren’t quite that popular … yet!

Polished and buttoned-up, Theodore sounds smart. But Teddy makes for a cuddly nickname, and Theo, with that ‘o’ ending, is as cool as they come. It’s been worn by many an accomplished figure, but spent the 80s, 90s, and early 00s in style limbo. Three decades of hibernation allow this name to feel just right today – a name we all recognize, but aren’t used to hearing on lots of little boys … yet. It re-entered the Top 100 in 2015, and continues to gain in popularity.

We know that Myles Standish landed on Plymouth Rock with the Pilgrims, which makes this name plenty historical. Legendary musician Miles Davis lends his name some unshakable cool. It might hold special appeal to runners, or maybe even travelers, since it conveys the idea of distance covered. But it carries at least two possible meanings: gracious, from a Slavic root, or perhaps soldier, from the Latin word. It’s not quite classic, but it comes very close, while still feeling very much at home in the modern world.

Jasper leans a little bit British, even though the original bearer of the name was one of the Three Kings who came from the East to bestow gifts on the infant Jesus. That makes it rather ancient, but it fits right in with twenty-first century nature names, too. After all, jasper is a type of gemstone. The two uses evolved separately, but they pair well, suggesting that Jasper carries value and worth, a long history, and a resilience that will continue into the future.

Some think of August as a modern nature name, summery and warm. Except August has been around for ages, enough to translate into nearly every European language. (Artist Renoir was born Pierre-Auguste; three kings of Poland answered to the name, among other royals and aristocrats.) It means venerable, a title given to the first Roman emperor. That makes this name quite grand, though perhaps the ties to the natural world temper it. Longer forms, like Augustine and Augustus, also rank in the current US Top 1000, but it’s August that best straddles the traditional/edgy divide.

Like Henry, Arthur once felt hopelessly dated. But time tends to bring classics back to favor, and now it’s Arthur’s turn. A regal name worn by kings from Camelot to Atlantis, Arthur tells a story. It’s a name that fits in the age of Kingston and Reign, but feels far more subtle. It’s smart – think Conan Doyle or Schopenhauer – but still accessible – like the animated aardvark or the Harry Potter character. (In fact, Arthur won last year’s Great Halloween Baby Names contest, Harry Potter edition!)

If you grew up on Sesame Street, Oscar might read a little green and grouchy. But the original bearer of the name comes from Irish legend, a hero with many great feats to his name. It’s been a big favorite with Spanish-speaking families over the years, too. And it glitters with the prestige of the Academy Awards, thanks to the statuette. All of that history makes for a versatile, category-defying name, worn by figures like boxer de la Hoya and writer Wilde alike.

A generation raised on Harry Potter knows that Felix comes from the Latin word for happy. It’s an auspicious name. Sure, there’s the old-school cartoon cat, but there’s also James Bond’s sometimes-CIA sidekick, a fairytale villain in ABC’s Once Upon a Time, and a handful of others, real and fictional, good and less so. Despite the fact that Felix isn’t directly related to the word feline, I tend to think of Felix as an ecovintage choice, just a little bit softer than Fox or Wolf.

Even before Will and Kate named their third Louis, reasons abounded to think Louis might be trending. Sister names Louisa and Louise were rising in use, along with so many Lou- names. Louis marries all the jazz of Louis Armstrong with  rock solid classic status. Boy names ending in ‘s’ are having a moment, from James to Hayes. And while the dueling  pronunciations might dissuade some, they’re both rather appealing – the buttoned-down Lewis, and the carefree, French Louie.

A name with a long history of use, Simon had a good run in England (think Simon Pegg, Cowell, LeBon) back in the 1970s. But no similar phenomenon happened in the US, meaning that American parents are free to re-discover this traditional New Testament name anew. It’s nickname-proof, on-trend with two-syllable, ends-in-n boy names, and carries the same classic, but neglected style that parents embraced with Henry.

We associate it with a long-serving president and an animated turtle. It sounds a little bit like all those two-syllable, ends-with-n surnames – think Logan and Mason and such. And it has history as a surname – look no further than Benjamin Franklin. Traditional, but not too expected, Franklin seems like Henry must’ve felt a few decades back.

The single-L Philip has long tended to be more familiar as a given name, while the double-L spelling appears most often in surnames. And yet, in the US, we’ve preferred Phillip much of the time. Today, two-L Phillip falls right behind the single-L spelling, at #505. In any case, it’s a classic that’s all-but back. Two pregnant mamas battled it out over this name on The Office back in 2011. (Angela and Pam both gave the name to their sons!)

Cedric leans literary, from Ivanhone to Harry Potter. And while it sounds like a name, not too much sounds like Cedric – something I’d also say for Henry. It enjoyed a modest spike in use during the 1960s, 70s and 80s, but has faded since then. And that spike? It wasn’t nearly enough to tie Cedric to a particular generation. Comedian Cedric the Entertainer might be the most prominent real-world figure; he was born back in 1964.

Those are my picks for the best boy names like Henry. What would you add? 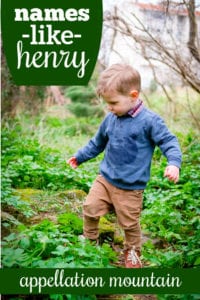 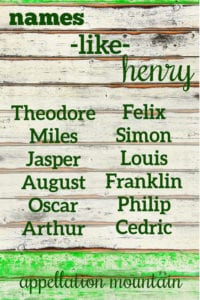