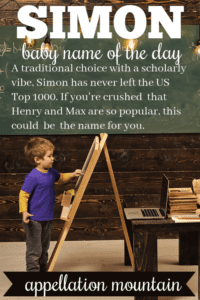 Biblical and brainy, Simon counts as a sweet spot boy name – familiar, but not too common, and on-trend, but never trendy.

This name goes all the way back to the Old Testament. But we usually call him Simeon, with an extra syllable. He’s the second son of Jacob and Leah.

As for the New Testament figure? Well, we typically refer to him as Peter.

Before he answered to Peter, he was a fisherman named Simon, who would become one of the twelve apostles and the first bishop of Rome, the rock on which Jesus built a church.

Several possible meanings for the name exist. “He has listened” and “God has heard” are most likely.

It could also mean flat-nosed. In fact, it may be two very similar, but distinct, names merged into one.

It’s possible more mixing occurred, thanks to Simund – the Norman form of Sigmund, which has both German and Norse origins.

There’s no shortage of men by the name in medieval England. In fact, it’s right up there with names like Walter, Roger, and Hugh – common then, relatively uncommon today.

While it’s hard to talk about popularity in the year 800 or 1282 or 1547, the history books give us plenty of men with the name and lots of places named Saint-Simon, too, especially in France.

That puts this name in the company of other perpetual favorites, like William and John. And, because of this, no shortage of surnames follow, most notably Simmons.

The 1980s gave us brothers-turned-private detectives AJ and Rick on CBS’ Simon & Simon. And champion namer Joss Whedon put smart, sensitive, and brave doctor Simon Tam aboard his space ship in Firefly and Serenity. The WB/CW family drama 7th Heaven included a son with the name, too.

There’s a villain by the name in DC Comics, seen recently on The Flash, and a hero on Quantico.

Then there’s the singing chipmunk, brother to Alvin and Theodore. He’s the responsible, level-headed, and considerate middle child.

Simon in the Land of Chalk Drawings originally aired on British television in the 1970s, but was seen in the US and Canada, too.

But it’s Simple Simon, who met a pie-man going to the fair, that claims the most history. The children’s nursery rhyme dates to at least the mid-eighteenth century.

As much a children’s storybook hero as Charlie, as enduring as William, as Biblical as John, it’s hard to say why we don’t hear more of this handsome name.

It’s a steady favorite across Europe, heard from Sweden to Hungary, and in parts of the Spanish-speaking world, too. Of course, Simón Bolivar, the political leader who helped so many former Spanish colonies achieve independence, almost certainly has something to do with that.

While it’s never left the US Top 1000, the name has never cracked the Top 100. But it’s also only briefly left the Top 500. That makes it a sweet spot name, the kind of choice that everyone recognizes, but too many people are choosing. If you’re crushed that Henry or Sam is too popular, consider this name – every bit as classic – instead.

What do you think of Simon? Would you consider the name for a son?

First published on September 3, 2008, this post was updated substantially and re-posted on December 19, 2018.