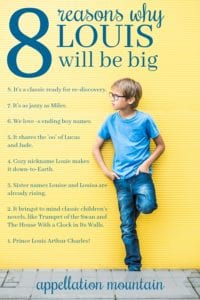 Ask me to predict the future of baby naming, and I’d say this: Louis will be big in 2019 and beyond.

Read on for my eight reasons why this name is one to watch, and maybe even one to consider for your family.

Why Louis Will Be Big: Quest for Classics

We tend to think of classic names as fixed and unchanging. And a handful do repeat, popular year after year and generation after generation.

But many of them cycle in and out of fashion. In the 1980s, no one was naming their son Henry. Today it’s a favorite, from celebrities to the family across the street. The same pattern emerges for so many traditional names, especially for our sons. It’s our great-grandfathers’ names that feel freshest today, choices like Arthur and Leo and Theodore and, yes, Louis.

Why Louis Will Be Big: Jazz, Baby

It’s not just what a name means, how it sounds, or how long it’s been in or out of favor. It’s also who wore it, and how that re-shapes our image of the name.

In this case, legendary jazz musician Louis Armstrong lends this name a lot of cool. There’s an edge, born of the New Orleans music scene, and a romance, too.

After all, another fast-rising boy name of recent years also owes much to a jazz legend: Miles.

Why Louis Will Be Big: That Ending …

Speaking of Miles, lately boy names ending with -s have become more stylish. Sure, James is evergreen. And you might argue that Miles isn’t novel.

But how ’bout Brooks? Hayes? Wells?

Louis marries traditional style with a trending sound, and that’s a winning combination.

Why Louis Will Be Big: The New Luke

It’s not just the -s that makes Louis a contender for the next big thing. It’s also that ‘oo’ sound, the sound of Cooper and Jude. It feels fresh and different after years of the long a sound – think Aiden and Mason and James, or the bright ‘o’ of Logan and Noah and Joseph.

In fact, Louis comes quite close to another pair of long-time favorites: Lucas and Luke. Both feel rock solid traditional, but in fact, they’re more popular in the early twenty-first century than they were in the late nineteenth. Louis could easily pick up on our long-standing love of those two names.

Why Louis Will Be Big: Louie, Louie

Almost every Charles is a Charlie, and Louis? Could easily be a Louie, too.

The name’s pronunciation is open to debate – some say it the French way, which sounds an awful lot like Louie. But either way, there’s a cozy, casual aspect to this distinguished, regal, and saintly boys’ name.

Why Louis Will Be Big: Sister, Sister

After many years outside of the US Top 1000, Louisa and then Louise returned. While Louis has never left the rankings – in fact, it’s always been in the Top 400 or so – the rise of the feminine forms suggests that we’re due for a rise in Louis, too.

Why Louis Will Be Big: #HouseWithaClock

There’s a sweetly storybook quality to this name, and a heavy literary pedigree, too. There’s author Lewis Carroll, of Alice in Wonderland fame, as well as beloved Narnia creator CS Lewis. And there’s EB White’s character in Trumpet of the Swan.

But here’s one that might put the name even more in the spotlight: The House with a Clock in Its Walls, a 1973 tale about an orphan who discovers he’s a warlock. No, not Harry Potter! Lewis Barnevelt. A big screen adaptation comes out in the fall of 2018, and if it’s a hit, more parents will hear this name, and associate it with a brave and capable child.

Why Louis Will Be Big: The Little Prince

A number of those famous figures spell their name Lewis, but I think it’s the -ou spelling that will carry the day. Why’s that, you ask?

Why, the prince, of course.

Will and Kate surprised the world when they named their third child Louis, recycling one of their firstborn son’s middle names for their youngest. The royals immediately raised the name’s profile. In the US, we’ve seen Charlotte and George rise after the arrival of the young Cambridges, so there’s every reason to believe that Louis will follow suit.

Those are my reasons for betting on the rise of this classic boy name. What do you think: will Louis be big?