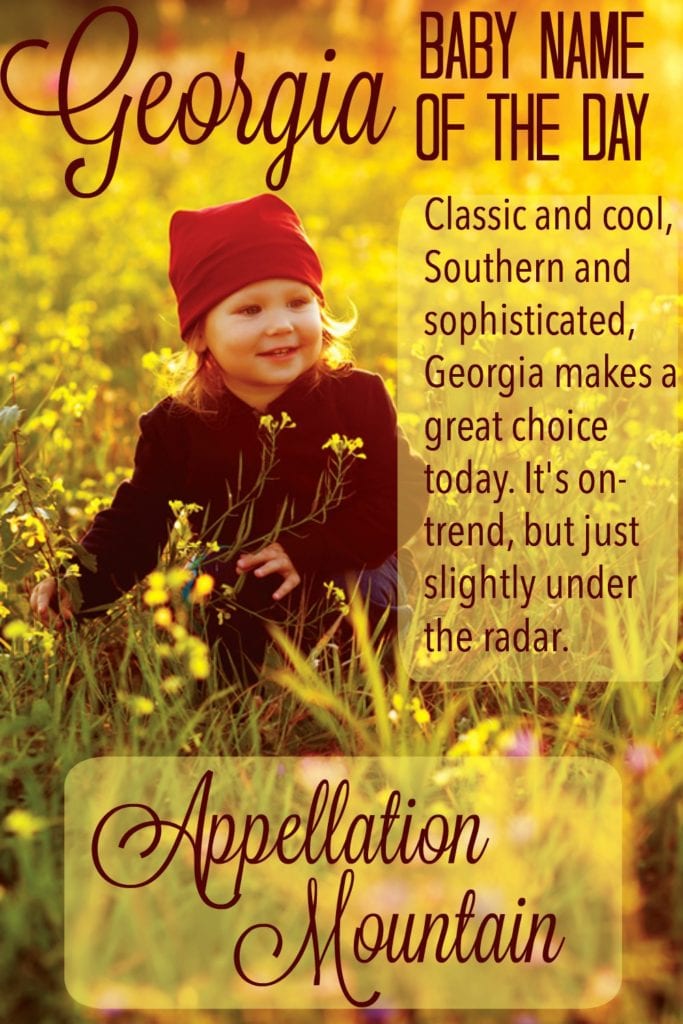 The regal George takes its meaning from humble origins. Despite being worn by five kings of England, the name comes from the Greek words for earth and work – farmer.

Legend tells us that Saint George slayed dragons before dying under the emperor Diocletian. Given the lack of dragons in the historical record, chances are that his story was embroidered, or at least misunderstood.

Thanks to the popularity of the saint, the name enjoyed plenty of use throughout history, and appears in many other languages, too. Layer on the first president of the United States, as well as writers and athletes, and reasons to use the name abound.

Change the -ge to a -gia, and you’ll have a feminine form of George.

In fifth century France, the future Saint Georgia lived as a hermit. Legend tells that a flock of doves followed her funeral procession.

But the artist O’Keeffe might be the best known.

Born in 1887, she studied art as a child, but soon abandoned the idea of becoming an artist. Only after a decade as an art teacher did she return to the possibility of creating her own work. O’Keeffe established herself as a leading artist, the Mother of American Modernism. A museum dedicated to her legacy stands in Santa Fe.

Georgia: On the Map

Thanks to the king and the saint, this name appears all over the map.

There’s the European country and former Soviet republic. Some insist the name comes from the dragon-slaying saint – but that’s probably not so. Instead, the Persians called them gurğān – which comes from a word meaning wolf.

In the US, the state, as well as the island in the Atlantic were named for English kings.

Of course, the US state makes us think of all sorts of things. It’s the heart of the American South, known for Atlanta and peaches.

The state’s official song, “Georgia on My Mind” might be among the most famous of state anthems. Hoagy Carmichael and Stuart Gorrell wrote the song back in 1930. Hoagy’s sister was named Georgia; but he insisted the song has always been about the place.

Then there’s “Sweet Georgia Brown,” written in 1925. In this case, the song took inspiration from a real person. Dr. George Thaddeus Brown served in the State House of Representatives for years; he named his daughter after the state, a moment celebrated by an official declaration from the state’s General Assembly.

Today, you know the jazz standard as the theme song for the Harlem Globetrotters.

Elaborations like Georgina and Georgiana have also seen plenty of use. 2008’s The Duchess starred Keira Knightley as the daring Duchess of Devonshire, Georgiana Cavendish. Other references include a character in Pride and Prejudice and another from Gossip Girl.

Georgia: By the Numbers

The name has never left the US Top 1000; in fact, it ranked in the Top 100 during the nineteenth century. Mick Jagger and Jerry Hall gave the name to a daughter in 1992; plenty of other celebs have used the name, too.

If you’re after a cool, stands-out/fits-in name for a daughter, consider Georgia. Nickname-proof and nickname-rich at once, edgy and traditional, this name has it all.

Would you consider Georgia for a daughter?

This original version of this post was published on November 15, 2008. After substantial revision, it was reposted on November 8, 2016.