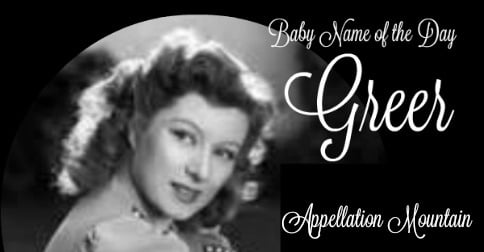 It’s a tailored surname name with ties to Hollywood royalty.

Thanks to Elizabeth for suggesting Greer as our Baby Name of the Day.

The Greek gregoros means watchful. It’s the root of Gregory, a name worn by saints in the third and fourth centuries, as well as sixth century Pope Gregory the Great.

Doubtless that’s why the name was so widely used over the centuries. It’s tried and true, a traditional choice for sons. Greg Brady makes it feel slightly dated in 2016, but only slightly.

Greer and Grier emerged as contracted forms of Gregory in Scotland. From there, it became most common as a surname. 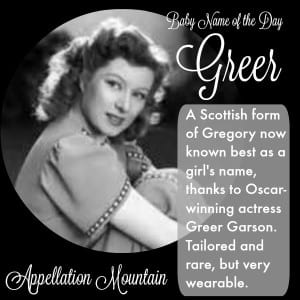 Eileen Evelyn Greer Garson Fogelson dropped three of her five names when she became an actress. As Greer Garson, she’d rack up seven Academy Award nominations, including one win for Best Actress in 1942’s Mrs. Miniver.

While the name was rare for boys prior to the 1940s, it was heard occasionally, likely a family surname promoted to given name status.

Then came the actress, and a handful of girls were also given the name. By 1943, 37 newborn girls were named Greer. But it never quite caught on.

We’ll come back to the question of numbers – and gender – a little later. For now, let’s keep looking at famous bearers of the name.

Australian-born writer Germaine Greer might also come to mind. Her first book, The Female Eunuch, was published in 1970, and became an international bestseller. She’s been a controversial, headline-generating thinker ever since.

You might recognize this name from a handful of other uses, including:

From Garson to Grammer, nearly every familiar bearer of the name today is female. The numbers reflect this. As of 2014, 65 girls and 17 boys were given the name. Alternate spelling Grier was used for 15 girls and 5 boys. While the numbers aren’t large, they clearly favor the feminine.

In an age dominated by mini-names and vowel-heavy names, Greer is a stand-out. It’s a name with crunch, maybe a little gruff. It’s more Ruth than Mia.

And yet, with so many similar-sounding names in vogue, parents might be eager to embrace something different. In a world of Aria and Ariana, Emma, Emily, and Amelia, Greer is strikingly different.

If you’re after a distinctive name for a daughter, Greer is one to consider. And while this one leans pink, it’s so rare that it’s not out of the question for a son, either.

What do you think of Greer? Is it better for a girl or a boy?