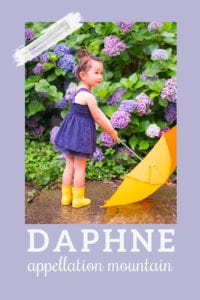 The baby name Daphne has traveled from Greek myth to Saturday morning televisions … and now back in time to Regency England.

The baby name Daphne comes straight out of Greek myth.

She’s a beautiful nymph, pursued by the god Apollo.

You might know Daphne’s story. Desperate to escape her pursuer, she prays to the gods. They change her into a laurel tree, effectively thwarting her unwanted suitor – but at a steep price.

Some say Apollo repented, choosing to wear laurel leaves in her honor, and eventually bestowing them on victors in athletic competitions, too.

Maybe so. But in any case, we’ve long associated laurels with achievements of all kinds.

But we haven’t forgotten Daphne’s flight. In the 1590s, Jacopo Peri composed Dafne, a sort of proto-opera wildly popular at the time. It was just the first of several adaptations of the myth. Richard Strauss’s Daphne debuted in Dresden in 1938 and is performed regularly. Art depicting the story – especially her transformation – is plentiful, too.

But the nymph  doesn’t just turn into a laurel tree. The baby name Daphne means laurel, making this a nature name. Or maybe a nature adjacent one.

That means the baby name Daphne may owe more to the garden – and our embrace of names like Violet, Lily, and Rose – than to Greek myth, at least in early uses.

Back in the mid-1600s, a piece of English folk music called “Daphne” existed. John Playford published all sorts of musical books during the seventeenth century, including The English Dancing Master, a 1651 work including “Daphne.” It was a how-to guide, intended for a dancing master to teach the steps to others. This suggests that the song – like most of them – predated the publication.

The English Dancing Master was reprinted into the 1720s, suggesting that generations of English dancers would’ve recognized the tune.

Whether future parents heard the name at a dance or in the garden, the baby name Daphne remained relatively rare.

By the late nineteenth century, that slowly started to change.

A series of early twentieth century uses might be familiar, too:

The name gains modestly in use – and falls, too – during the first half of the twentieth century. It never makes the Top 500, though, keeping Daphne in the company of relative rarities.

ABC’s Surfside 6 gave handsome Troy Donahue a houseboat and a gig as a private detective. Donahue’s houseboat was berthed next to a yacht owned by socialite Daphne Dutton.

The Scooby-Doo crew included a bunch of meddling kids and a dog who helped them solve mysteries. The Hanna-Barbera series ended its initial run on CBS in 1976, but re-runs, spin-offs, live action adaptations, and reboots have continued ever since.

Daphne Blake is the red-headed member of the team. She’s wealthy and pretty, known for her signature lavender dress and heels. Early on in the series, Daphne tended to end up in danger – but as the show evolved, so did the character.

Instead, the baby name Daphne most often hovers in the 400s or higher. It’s left the rankings many a year.

The 2009 version of this post declared that Daphne was “one that might just rise dramatically in the next decade or so.” At the time, the name ranked #583.

As of 2019, Daphne stands at #432 – far behind all of those powerfully popular choices, as well as other -e ending Greek girl names, like Phoebe. Other possibilities, like Calliope and Persephone, are catching on and could eclipse Daphne.

The small screen has always given us plenty of Daphnes.

Besides the animated version, we’ve heard the name on Switched at Birth, No Ordinary Family, and Heroes have used the name for characters. Long-running series Frasier gave us the English Daphne Moon. Talk show host Daphne Oz is another familiar face.

But all are a prelude to the blockbuster Bridgerton. Shonda Rhimes’ debut production for Netflix was a most unusual choice. We know Rhimes for her contemporary dramas, but Bridgerton is set in Regency England. It’s based on a series of romance novels, narrated by the anonymous know-it-all Lady Whistledown. Think Gossip Girl meets Jane Austen.

The love affair at the center of the first season of Bridgerton involves a rakish nobleman – the Duke of Hastings – and the well-born Miss Daphne Bridgerton. It’s been a smash hit.

Could this finally transform the baby name Daphne from an also-ran among Greek myth names into a chart-topper?

The time may – finally! – have come for this high-energy charmer to catch on.

Do you think the baby name Daphne will catch on? 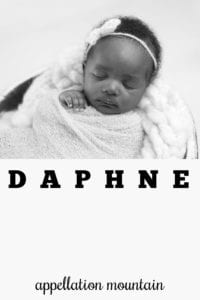