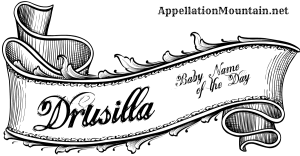 Today’s feature is an ancient name worn by a delightfully dangerous television vampire.

Goth Week continues, and Drusilla is our Baby Name of the Day.

Drusilla comes to us from an Ancient Roman family name: Drusus.  The prevailing theory is that the original Drusus took his name after defeating a Gallic chieftain named Drausus, sometime in the third century BC.

Plenty of others answered to the name.  Then came Livia Drusilla, wife and adviser of the Emperor Augustus.

Some accounts paint Livia as a model Roman matron.  Others suggest she’s scheming and power-hungry.  Either way, she was certainly influential.  And Livia, for all her strengths and faults, put the name Drusilla on the map.

Another Drusilla was Julia Drusilla, sister of Caligula.  Rumors suggest they were lovers.  This Drusilla died young, and her brother mourned by having her declared a goddess and later naming his only daughter after her.

There’s a Drusilla in the New Testament, too.  The daughter of Herod Agrippa, Drusilla was married to Felix, the Roman governor of Judea.  Felix and Drusilla heard the apostle Paul speak when he was captive in Caesarea.

It isn’t recorded if Paul’s teachings changed their lives.  We do know that Drusilla perished at Pompeii in 79 AD.

As a given name, Drusilla saw some use over the years.  The name was rare, but not unknown, in the Middle Ages.  A handful of girls were named Drusilla in the late nineteenth and early twentieth centuries, too.

Doubtless some parents were inspired by the Bible, and others by the ancient world.  Robert Graves’ novel I, Claudius was published in 1934.

A handful of girls received the name every year, but Drusilla remained obscure.

In the second season of Buffy the Vampire Slayer, Buffy faced a new set of enemies – a pair of British vampires: Spike and Drusilla.

Drusilla was crazy, from her first appearance on screen.  She was semi-psychic, given to talking in riddles.

Neither character was meant to last, but both Spike and Drusilla would appear in Buffy and spin-off series Angel over the years, as well as comic books.

The vampire is the major reason why Drusilla leans Goth – and yet, she’s not likely to be a household name by the time a Drusilla born today reaches grade school.

American parents like an elaborate name for a daughter, trading Alexandra for Isabella, and then moving on to Annabelle.  Drusilla fits the pattern.  And, like Alexandra, she has a boyish nickname built-in: Dru.

And so if Drusilla appeals to you, this could be the ideal familiar-but-seldom-heard kind of name that wears well.

What do you think of Drusilla?  How would this name wear today?