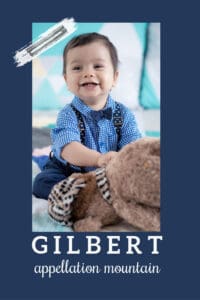 Thanks to Katherine for suggesting GIlbert as our Baby Name of the Day.

It’s easy to think of Gilbert as a last name.

It’s originally Germanic, one of many the Normans imported to England.

It means “bright pledge.” That familiar -bert ending is from beraht – bright, while the first syllable comes from gisil – pledge or hostage. In Latin, it’s sometimes Giselbertus, along with the more predictable Gilbertus.

Hostages, in this context, weren’t exactly prisoners. Just like a marriage could be used to cement a political alliance or financial arrangement, it was also possible to send a hostage to uphold the agreement. They were more like guests, or possibly wards.

In addition to Gilbert, names like Gilbald and Giseltrude are found dotting medieval documents.

And beraht, of course, gives us names ending with -bert from Albert and Robert to Egbert and Dilbert.

More poetic meanings, like “bright oath” and “shining promise” are often given for the baby name Gilbert. That sounds quite valiant, even if they’re a little imprecise.

As it happens, the baby name Gilbert was popular during the Middle Ages.

The Normans brought it to England. The 12th century Norman Earl of Pembroke was Gilbert de Clare.

The popular pet form of the baby name Gilbert for at least some of these centuries was not Gil, but Gib.

Gib also referred to a male cat. In Shakespeare’s Henry IV, Falstaff complains, “Sblood, I am as melancholy as a gib cat or a lugged bear.” It’s an obscure reference, but an intriguing one.

This means, of course, that surnames like Gibbs and Gibson come from Gilbert.

One more famous figure? Gilbert was a family name for the Marquis de Lafayette.

Despite the success of Hamilton, we rarely think of the French arisocratic soldier as having a given name at all. But Lafayette was born Marie-Joseph Paul Yves Roch Gilbert du Motier.

His family was a big deal. Back in the day, Gilbert Motier de La Fayette served as a Marshal of France. During the Hundred Years’ War, he served capably as a military commander. In 1429, he fought alongside Joan of Arc.

Fast-forward to the Victorian era and W.S. Gilbert collaborated with Arthur Sullivan on a string of popular comedies.

Where would musical theater be without the Pirates of Penzance?

This brings us to North America, to arguably the most famous Gilbert – the literary Gilbert Blythe.

Invented by author Lucy Maud Montgomery for her Anne of Green Gables series, Gilbert is handsome and popular. He grows into a reliable, successful, and devoted doctor and husband to Anne.

Actor Lucas Jade Zumann played the part for the most recent adaptation of the stories, Anne With an E.

If not Blythe, you might think of What’s Eating Gilbert Grape? ​

The 1993 coming-of-age drama starred a young Johnny Depp as Gilbert, and an equally young Leonardo DiCaprio as his younger brother, Arnie. The role earned DiCaprio his first Academy Award nomination.

Or maybe you’re a fan of CSI: Crime Scene Investigation. The long-running CBS crime drama gave us Gilbert “Gil” Arthur Grissom, a long-running character on both the originals series and the spin-off CSI: Vegas. Grissom is a foresnic entomologist, played by William Petersen.

It’s not surprising that the baby name Gilbert is so ever-present.

The romance language Gilberto had a good run, too, but left the rankings after 2013.

Despite Gilbert’s fall from favor, it remains in use. During 2021, 158 boys were named Gilbert.

If you’re after a name that sounds just right on a little gentleman, Gilbert has potential. With all the Anne of Green Gables energy and history to spare, Gilbert is a good choice for parents after an underused, traditional name.

Gil belongs on the same playground as Jack and Charlie, and promises to age well, too.

If you’re after a name that everyone knows, but no one is using, Gilbert has potential.

What do you think of the baby name Gilbert? 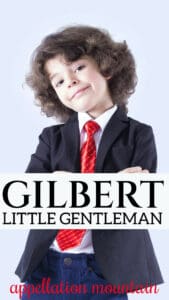 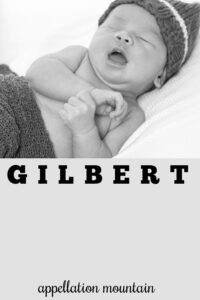