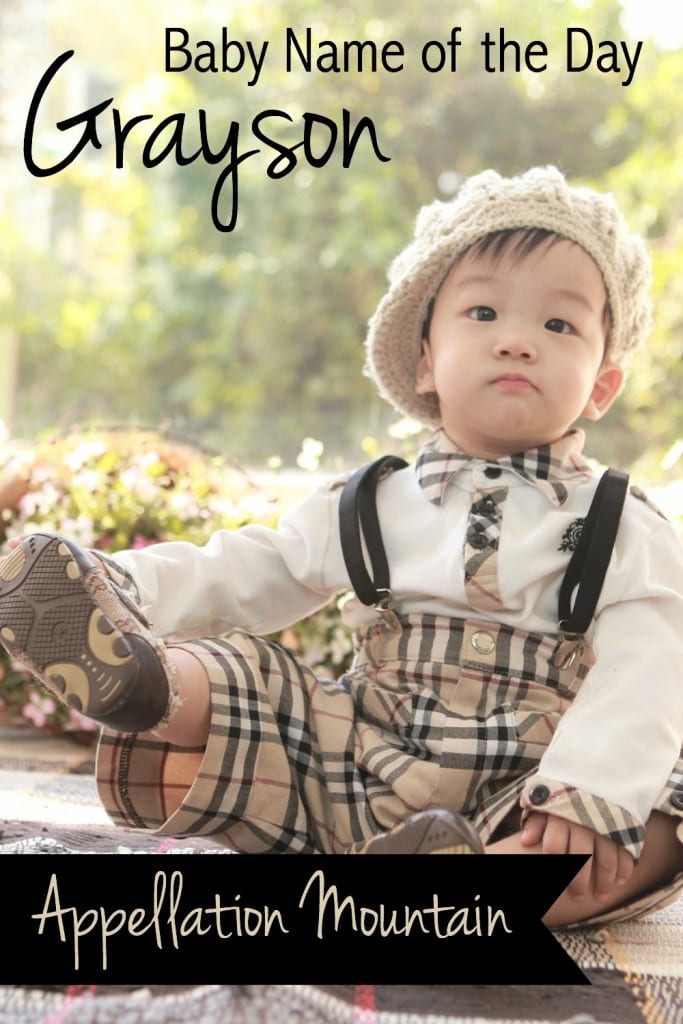 Grayson is a fast-rising favorite, seldom heard before the 1980s.

Thanks to Michaela for suggesting our Baby Name of the Day.

It’s possible that this surname sometimes referred to the color gray, as in hair, but it’s probably better considered an occupational name for a steward.

Yup, a steward. Also known as a greyve in Middle English, which became Grave and led to the surname. What’s a steward? A servant of sorts, but typically more of a manager, charged with a variety of tasks related to managing an estate and compensated accordingly. In some places, it was even a hereditary office.

In England, there’s another possible origin for the name: Anchetil de Greye.

de Greye was a Norman knight who came over with William the Conqueror in 1066. He became wealthy and influential, as did his descendants, including a Bishop of Norwich, John de Gray.

His given name suggests that his ancestry was Norse, while his surname probably reflects his home, Graye-sur-Mer, in Calvados, Normandy.

Like nearly any surname, Grayson has seen some use as a given name.

Academy Award nominated actress Grayson Hall was an early example. Hall was nominated for a Best Supporting Actress Oscar in 1964, and was known for her turn on Dark Shadows in the 1960s. But her birth name? Shirley Grossman.

It didn’t lead to an uptick in use for girls – though you do find a few others in the 1960s.

Instead, the name slowly gained in use over the decades. In 1984, 99 boys were given the name – enough to push Grayson into the US Top 1000 for the first time ever.

It hasn’t left since.

What explains the 1984 debut? There’s no single reason.

By then, it was familiar as:

Plenty of television series have used the name, including The Vampire Diaries, Cougar Town, and especially Revenge – where it’s the name of the fabulously wealthy and glamorous family at the heart of the drama.

Real world uses are plentiful, too. Country music gave us Blackjack Jack Grayson in the 1970s and 80s, and there’s English artist Grayson Perry, who rose to fame in the early 2000s.

Maybe the explanation behind this name’s rise is simple: it’s all about sound. Jason and Mason have both been Top Ten darlings.

Factor in other spellings, and this name is even more popular. Besides Grayson (#63), there’s Greyson – #133 and climbing fast! – as well as Graysen.

Overall, Grayson makes for a very mainstream choice in 2016. It’s not as common as some surname favorites, but feels very much like a solid choice for a son.

What do you think of Grayson? Do you know a lot of boys with this name?