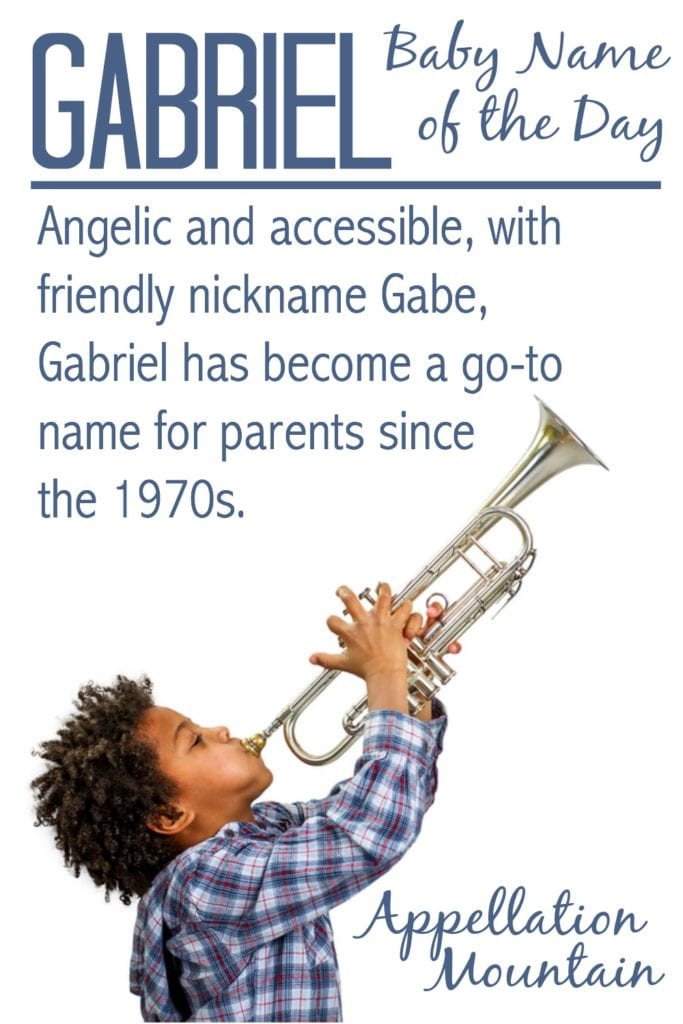 Gabriel brings glad tidings to Mary in the New Testament. And for the past twenty-five years, parents have announced the arrival of their sons sharing the angel’s name.

We all know the angel visited Mary, but it wasn’t his first outing. He’s mentioned in the Old Testament, and plays roles in the teachings of Judaism, Islam, and more.

Milton placed him at the gates of Paradise.

The Bible tells us that a horn will signal the beginning of Armageddon; popular lore names the angel as the horn blower. Cole Porter’s beloved musical Anything Goes included the song “Blow, Gabriel, Blow” in 1934.

This makes the name deeply spiritual, and yet, unlike many a Biblical boy name, this one feels generally wearable.

Gabe transforms the name from angel to cowboy.

While we rarely find boys named just Gabe, a great many boys do prefer the nickname. In 2015, just 88 boys received the nickname version, while nearly 10,800 boys were given the full name.

Hannah Montana and Good Luck, Charlie – both Disney Channel series – included characters referred to by the nickname only.

The name qualifies as traditional. It has appeared in the US Top 1000 every year since 1880.

Plenty of others could be added to the list, too.

No single reason explains the name’s rise. One possibility: the popularity of Michael, which reached #1 in the 1950s, boosted the similar Gabriel.

Instead, we find a steady increase in high profile uses of the name.

Sometimes it occurs as a surname – think of Genesis alum Peter, equally successful as a solo artist and advocate for world music.

Actors Byrne and later Macht were both early bearers of the name.

In 2003, the royal family of Belgium welcomed Prince Gabriel Baudouin Charles Marie, second in line to the throne behind big sister Elisabeth.

Gabriel: By the Numbers

This name appears in the Top 100 – or even Top Ten – in many a nation. You’ll hear it in France and Spain, Canada and Australia, Sweden and Austria, Chile and Brazil, to name just a few. It’s especially popular in Georgia, thanks to a monk known for his opposition to Communism, now considered a national hero.

The name mixes a spiritual, serious side with rough and tumble nickname Gabe and a certain jazzy appeal, thanks to all the references to Gabriel’s trumpet.

If you’re looking for a modern favorite that feels current without being modern, this name might be one to add to your shortlist. Just know that the name – along with feminine forms – has become a staple choice in recent years.

Would you consider Gabriel for a son?