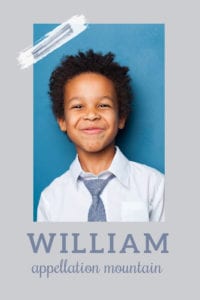 The baby name William belongs with the most evergreen of classics.

Thanks to Lina for suggesting our Baby Name of the Day.

Look at the most popular names for boys over the centuries, and they have one thing in common: they’re straight from the Bible.

The baby name William is not.

But it belongs to the second-most powerful group: Germanic names imported to England by the Normans.

Those names evolved as the language did, thought most of William’s earlier forms – like Willelmum – don’t sound too different from the version we know today.

Like many Germanic name, it comes from two elements, in this case meaning desire and helmet or protection. “The desire to protect” makes an appealing meaning, though it takes a little bit of poetic license to get there.

Well before the baby name William surfaced in England in any form, it was heard at the court of Charlemagne.

Born in the 700s, Guillaume d’Orange was a well-born noble and military commander. His victories were famous. Charlemagne, of course, united much of western and central Europe during his reign, with plenty of military maneuvers along the way.

Guillaume eventually retired to monastic life, founding an abbey in Gellone. He was canonized a saint in 1066, and we often refer to him as Saint William of Gellone today.

He’s even more famous thanks to the Chanson de Guillaume, a twelfth century epic poem detailing William’s triumphs in battle.

While it’s difficult to separate fact from fiction, it’s no surprise that the baby name William became widely used. The character is presented as loyal, brave, and pious. An admirable hero can boost a name in any era.

There were oodles of Williams in France, but it was William the Conqueror who brought the name triumphantly to England in 1066.

Kings of Scotland, Sicily, Prussia, and the Netherlands all answered to William, too.

But the baby name William’s biggest boost in our era came in 1982. That’s when the Prince of Wales – Charles – and his beloved wife Diana welcomed their firstborn son, William Arthur Philip Louis.

Prince William has been second in line to the British throne ever since, and he’s been internationally famous from that very first moment.

There have been King Williams of England before – four of them. But the last reigned in the 1830s. So while the name is plenty regal, it very much belongs to the current prince.

William Shakespeare is arguably more famous than any single prince or saint. Other writers include Wordsworth, Yeats, and Faulkner – to name just a few.

Speaking of rebels, twelfth century Scottish leader William Wallace is a twelfth century figure. He led a crusade against the English, the subject of Academy Award-winning movie Braveheart.

Former US president Bill Clinton is another notable William.

In fact, there are so many noteworthy Bills and Wills, Williams and Billys, that it’s impossible to list them all. Billy Joel and William Shatner, Bill Gates and Billy Graham … and that barely scratches the surface.

The baby name William became a powerhouse of a name, worn by men of accomplishment in every field of endeavor.

BILL, BILLY, WILL, and LIAM

What has changed – just a little – might be the preferred nickname.

In an earlier generation, most parents chose the baby name William, but called their boys Billy. Billy grew up (mostly) to be Bill. But lately Will dominates. Some of that is down to the current Duke of Cambridge. Princess Diana referred to her sweet son as Wills.

But it’s not the only option. Irish short form Liam – hold the Wil – caught on in the UK in the 1980s, and slowly made its way across Europe and the US. It now holds the top spot in the US, as the most popular boy name in 2019. That puts it just a bit ahead of the baby name William.

That said, the baby name William is one of the very few choices to never leave the US Top 20 for boys.

In fact, it’s ranked in the US Top Ten more than 75% of the time, spending nearly thirty years at #2.

In 1982, the baby name William ranked #15. There’s no clear impact from the prince’s birth.

The baby name William has fared better in the twenty-first century, in the year since William himself has become a dad. As of 2019, it ranks #4 in the US.

No question that William belongs with the most enduring of classic choices for our sons.

Multiple nickname options make it versatile. But it’s handsome in full, too, a name rich in history but still easy to wear. It’s an impeccable choice that might be shared with others, but will never feel dated.

What do you think of the baby name William? Do you prefer Billy, Bill, Will, or another nickname?

First published on March 26, 2015, this post was revised substantially and re-published on 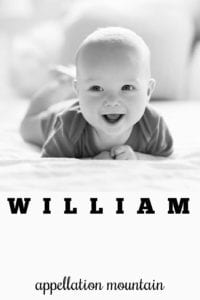