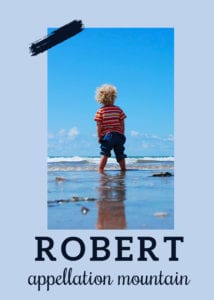 The baby name Robert held the top spot for years. Even as it has fallen out of favor, it remains polished and traditional, a strong choice for a son.

It’s easy to see the roots of the baby name Robert in Germanic Hrodebert – bright fame.

There’s a similar name in Old English, so when the Normans brought Robert to England, the two merged.

It’s been in heavy rotation, a favorite for boys in English, from the Middle Ages to the present day.

It feels impossible to list every famous bearer of the name Robert, but a few stand out.

The early saint Robert served as the first bishop of Salzburg, Germany around the year 700. (Though he’s often called Rupert.)

Robert the Bruce restored independence to Scotland during his reign as king in the early 1300s. Then came Rob Roy, an early 1700s Scottish outlaw in the key of Robin Hood, who became a folk hero.

Poets Burns, Browning, and Frost take the name in a literary direction.

No surprise, then, that Robert ranked in the US Top Ten in the early twentieth century.

That puts Robert in an elite fraternity. Only eight names have ever ranked #1 for boys in the US: John, James, David, Michael, Jacob, Noah, Liam, and Robert. Until Liam reached the top spot in 2017, Robert was the only non-Biblical boy name to rank #1 in the US.

That means, of course, that the famous Roberts don’t stop with the history books.

It’s easy to miss some uses of the baby name Robert, because we know them almost exclusively by a nickname. Bobby Kennedy comes to mind; so do Bob Ross, Bob Dylan, and Bob Marley.

The baby name Robert also shortens to Robin – as in Hood – as Rob and Robbie. The latter two seem a little more current than Bob today, but they all work.

All of this makes for a rock solid traditional name. But after so many years of heavy use, Robert has fallen out of favor. As of 2018, it stands at an all-time low of #71. Names including Owen, Mason, and Wyatt might be relative newcomers, but they’re all more popular than Robert these days.

But here’s the thing: classic names are subject to trends, even if they’re never trendy. The baby name Robert remains a Top 100 pick, meaning it will remain a reliable choice for a boy.

If you’re frustrated that every kid you know is called Henry, James, or William, then Robert might be the logical substitute. Bob sounds like your great-uncle, but Robbie and Rob are far more contemporary.

Would you consider the baby name Robert for a son?