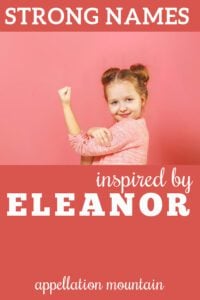 So many parents are looking for them: strong girl names.

There’s more than one of strong, of course. Some are heroic, like fictional Hunger Games champ Katniss Everdeen – modern, unexpected, frills-free names for warriors.

Others bring to mind the fictional Hermione Granger – obscure, rich in history, capable, and ever so smart.

But how about strong girl names for girls inspired by a historical figure?

Of course, she wasn’t the first famous Eleanor.

Medieval queen Eleanor of Aquitaine was also regarded as an exceptional figure. Well-educated and exceptionally powerful, she played a role in European politics across many decades.

So what puts a name on this of strong girl names inspired by Eleanor?

It must be strong and sensible. Light on the frills. Like Eleanor, it should have a certain timeless quality. Eleanor names are instantly recognized, and sound just right with letters like PhD and MD behind them, and titles like Chief Justice and Chair in front of them.

The enduring legacy of former First Lady Abigail Adams puts this name in the company of Eleanor.

It’s a grand name, with a big meaning – noble type.

Aggie ought to make Agnes very wearable with all the girls answering to Maggie, Millie, and Abby. There’s an early Christian martyr named Agnes, and women of accomplishment through the years since.

Shakespeare’s quick-witted character in Much Ado About Nothing puts Beatrice among the strong girl names.

A virtue name, with the same tailored style as Eleanor, elegant and refined Constance could be the perfect choice for a girls’ name that everyone recognizes, but no one is using.

It’s the given name of Wonder Woman, as well as the much-admired late Princess of Wales, born Lady Diana Spencer. Plus, the name Diana belonged to the Roman goddess of the hunt and the legendary Diana Ross. It’s a name that has been worn by strong women – fictional and real – since the very beginning.

Downton Abbey’s Lady Edith launches a career as a journalist after her attempts at traditional marriage-and-motherhood founder. The name peaked more around the turn of the century ago, meaning that it’s one of those long-neglected choices that feels fresh again.

It should go without saying that Eleanor is an Eleanor name. It’s a strong, classic choice for a daughter. Besides the medieval queen and the former First Lady, Jane Austen gave us Miss Elinor Dashwood of Sense and Sensibility.

The name of a heroic Old Testament queen, there’s no question that Esther belongs on a list of strong girl names.

Tailored and vintage, Evelyn might’ve once been the most capable secretary in the steno pool or the most tireless mechanic in the Women’s Army Auxiliary Corps. While it’s a name from another time, Evelyn feels completely at home – and equally talented – in the twenty-first century.

The Lady with the Lamp is enough to earn Florence a place on this list. Florence Nightingale’s given name is pure poetry, evoking the famous Italian city of her birth as well as a musical bird. But she’s known for founding the modern practice of nursing, saving countless lives from the Crimean War forward.

Another First Lady name, thanks to Mrs. Grover Cleveland, Frances has been worn by some notable women. Author Frances Hodgson Burnett comes to mind, as does tireless activist and suffragette Frances Willard. It’s a gentle name, but one with quite a bit of strength, too.

Gracie is down-to-earth and spirited, but Grace has a cool elegance. It’s a traditional name, and a very popular one, too. But nothing says that a Top 100 name can’t be strong, and Grace Kelly lends the name quite a bit of style.

Harriet Tubman wasn’t just an abolitionist who traveled the Underground Railroad to bring other slaves to safety. During the Civil War, she served as a spy for the Union Army. Harriet is slowly climbing in popularity in recent years.

Helen is sometimes linked to Eleanor, but this name’s roots go back far deeper in history. In Greek myth, Helen of Troy was known for her beauty. Oscar-winning actor Helen Mirren lends this name some Hollywood shine – and quite a bit of backbone, too.

From Joan of Arc to Mad Men’s ambitious Joan Holloway Harris, this name brings to mind some fearless women. Jane is slightly more ladylike, but Joan is out to change the world.

As in Jo from Little Women, one of the literary world’s enduring strong girls.

The Book of Judith might not be historically accurate, but that doesn’t diminish the character Judith. In her story, she bravely beheads the enemy general, Holofernes, and saves her people from defeat. If you’ve ever seen Caravaggio’s famous painting of the scene, there’s little doubt that Judith is fierce.

Katharine Hepburn is a Hollywood legend. The same spelling brings to mind the late Washington Post editor Katharine Graham, and a few other notables, including Saint Katharine Drexel. Worn by queens and countless women of accomplishment, Katherine is a powerful name in any spelling.

Legends tells us that St Margaret of Antioch defeated a dragon. Many centuries later, Margaret Thatcher became the first female Prime Minister of the United Kingdom, earning the nickname The Iron Lady. All along the way, this classic name has suggested considerable will.

In some ways, gentle Martha sounds most at-home quilting or canning preserves. But it’s a surprisingly versatile name. Overall-sporting Martha Quinn became one of MTV’s first veejays. And Martha Stewart spans both worlds, turning the domestic into big business.

This long-time #1 name for girls has fallen in recent years, and even Downton Abbey’s Lady Mary Crawley hasn’t brought it back. But it’s a towering classic of a name, as saintly and regal as Margaret or Eleanor, and, depending on your faith perspective, among the most courageous women in human history.

This Welsh name is used for boys and girls, and as a surname, too. But in the US, it’s almost exclusively given to girls. This makes Meredith feel a little more modern than Margaret, but every bit as strong.

Yes, Millicent is the name of a dainty, polite mouse. But it comes from Amalswintha, a Germanic name composed of the elements work and strong. During the first World War, Lady Millicent Hawes organized an ambulance unit in Belgium, was briefly trapped behind enemy lines, and returned to direct field hospitals in France. She’s just one of the Millicents who more than lived up to her name’s meaning.

The ancient Octavia offers a distinctive sound. A fictional character from The 100 along with Oscar-winning actor Octavia Spencer cement this name’s place on the list of strong girl names.

Olivia is long and flowing, while Olive is quieter. A nature name associated with peace, Olive has gone from seldom heard rarity to rising favorite in recent years. It’s every bit as strong as Eleanor, and less expected, too.

Not every Shakespearean name makes the list. But Beatrice does. And so does Portia. After all, not only is she beautiful, but she’s brilliant and witty, too. The wealthy heiress at the center of events in The Merchant of Venice, she saves Antonio in the courtroom with her quick, razor-sharp thinking.

An Old Testament name with a long history of use, we tend to think of Rachel as Jennifer Aniston’s character on Friends. But with a frills-free, distinctive sound, there’s no reason this name shouldn’t continue to be a choice for our daughters.

While the name Rosamund originally comes from Germanic elements meaning horse and protection, we associate Rosamund with Latin rosa mundi – rose of the world.

Or maybe it’s spare and straightforward Rose that sounds like the more obvious choice. It’s name from the garden, but one with plenty of steel. Maybe it’s the name’s strong and simple sound. Or maybe it’s the almost intimidating elegance of the flower. Rosie is friendly and accessible, but Rose is an Eleanor.

Ruth is another Old Testament possibility, but it doesn’t feel as specifically religious as some names. That’s probably because it’s been widely used in years past, adding vintage charm to the name’s appeal. The late Ruth Bader Ginsburg is just one of the many notable women to answer to this name.

Singer Nina Simone is one reason this name make the list. But it’s also a tailored choice that feels feminine without being frilly. Writer, activist, and philosopher Simone de Beauvoir adds an intellectual cast to the name.

Sophia is an unapologetically pretty name, which makes it a little different than names like Edith and Constance. But Sophia’s meaning – wisdom – puts it right back in their company, a smart and capable choice for a daughter.

Abolitionist and sufragette Susan B. Anthony worked tirelessly for the causes that she championed. If Susan hadn’t been such a hit in the 1950s, it would almost certainly be a chart-topper today.

Sybil is the youngest of the Crawley sisters from Downton Abbey. Mary and Edith make this list, too. In the ancient world, a sibyl was a prophet, always a woman. Michelangelo painted them on the ceiling of the Sistine Chapel. The name was used way back in the Middle Ages, and occasionally since then.

Theodora just sounds like a strong name for a daughter. Much less common than the masculine Theodore, Theodora still has history as a given name. There was a Byzantine empress and a Grey’s Anatomy character, too. Sparky nickname Thea is even more popular.

If not for the sea witch in The Little Mermaid, perhaps more of us would consider this name. Ursula is undeniably strong – how can any name than means bear be anything other?

It might bring to mind February 14th. But all of the Val- names come from the Latin valens – strong, also the root of our word valor. It’s romantic, but also daring. The Soviet Union’s Valentina Tereshkova was the first woman in space. The name is used in Italian and Spanish, as well as Russian and other Slavic languages, making it international, bold, and yes, strong.

Was there ever a name more appropriate for a queen than Victoria? There’s a whole story there, but suffice to say that Victoria now feels like the kind of name that can define an era. The meaning doesn’t hurt, either – victory.

Modern and vintage at once, a tailored and straightforward Vivian seems capable of big things. It could be the name of the brilliant CIA agent in the newest blockbuster, or a lion tamer, or a deep sea diver. Maybe the name’s Latin roots – it means alive, from vivus – are the reason.

Winifred seems a little lighter than some Germanic names, and nickname Winnie lends the name some whimsy. But no question that Winifred sounds very capable, indeed.

Maybe Zenobia is more of an obscure Hermione than a traditional Eleanor. But back in the third century, a queen named Zenobia led her people in revolt against the Roman Empire. That takes moxie. It’s also the name of a character in Nathaniel Hawthorne’s Blithedale Romance, and the middle name of Tina Fey’s older daughter, Alice Zenobia.

Which strong girl names would you add to this list? 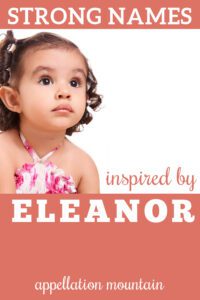 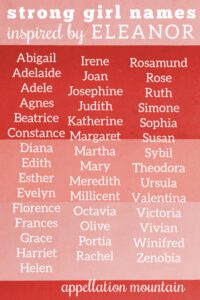