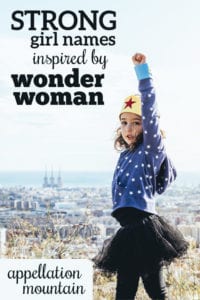 Wonder Woman baby names marry the ancient world with the modern legacy of superheroes. She’s been a fan favorite for years.

After all, the character occupies a special place among comic book heroes. Because most of the good guys? Are guys.

Charles Moulton invented the first female superhero in 1941, and Wonder Woman has been an almost constant presence in the comic book world ever since. Her story is pretty darn cool. She’s an Amazon princess, wielding the Lasso of Truth and wearing indestructible bracelets.

Back in the 1970s, Lynda Carter leapt from the pages of DC Comics to the television screen. For three seasons, she deflected bullets with those magic bracelets and inspired countless school girls to buy themed lunch-boxes and Underoos.

She makes her way from the Amazon island of Themiscyra to our world when Steve Trevor, army intelligence officer, crashes his plane on the previously unknown settlement. Princess Diana, daughter of the island’s queen, earns the right to escort him home – and, later, to stay and join the fight during World War II.

So will the warrior boost Wonder Woman baby names?

There’s a good chance. With eighty years of story to draw from, there’s no shortage of possible characters that could appear on the big screen as the DC Comics-inspired movies unfold. And Wonder Woman is closely tied to ancient Greek and Roman myth, a category of baby name inspiration that’s already quite stylish.

Read on for my list of Wonder Woman baby names – and please add your favorites in the comments!

A minor character from the comics, and an intriguing name. It means thorny, and the name is associated with the acanthus plant, making this name as botanical as Briar.

In Greek myth, Aella was one of the Amazons who faced off against Heracles, and lost her life in the battle. In the comics, the name belongs to the royal falconer.

While all of the Alex- names are falling now, there’s an Amazon by the name in an animated 2009 direct-to-DVD Wonder Woman film. The meaning – defender of men – makes it an obvious choice.

Anaya seems to be a newer character. It sounds like a spin on Maya and fits right in with modern names. It’s a Spanish place name and a Basque given name meaning brother; both have appeared as surnames, too. Fun fact: one of the villains in the 2017 Wonder Woman movie was Dr. Isabel “Doctor Poison” Maru, played by Spanish actor Elena Anaya.

Antiope is a general in the Amazonian army, and aunt to Diana.

A great Greek myth name borrowed for a blue-haired Amazon.

It’s the perfect name for the leader of another Amazon tribe who challenges Princess Diana. While Diana and Artemis have some differences, Artemis is generally considered Diana’s Greek equivalent.

The mythological Atalanta comes awfully close to the (unrelated) city name Atlanta, but that doesn’t mean it’s unwearable. In Greek myth, Atalanta was quite accomplished. It took trickery, with the intervention of the goddess Aphrodite, for a man to beat her in a foot race and win her hand in marriage. Atalanta makes the list of Wonder Woman baby names because she’s the leader of another tribe of Amazons in the Wonder Woman ‘verse.

She’s an Amazon who serves as an oracle.

There’s been more than one version of Wonder Girl, Wonder Woman’s teenage sidekick. Cassandra “Cassie” Sandsmark is one of the best known. Her backstory? She’s the daughter of the beautiful, mortal archeologist Helena and the god Zeus.

Another Amazon, with a name borrowed from a Muse. Also, one of my Katniss names. And my daughter’s name, so I’m biased about how great it is. In the Wonder Woman ‘verse, she’s a royal scribe.

And another Amazon. The name appears to be borrowed from Hungarian – which might make it the only one on this list.

Like Diana, a very wearable borrowing from the Greeks.

At some point, one of the Wonder Woman writers chose lots of D names for new characters. Dessa debuted in 2011.

Some superhero alter egos attach to different characters across time. (Just think of Spider-Man.) But Wonder Woman is always Diana. That’s true on her island home of Themiscrya, and while working undercover in our world. In Roman myth, Diana was the goddess of the hunt, so it seems like a fitting choice for our hero. The name ranked #296 in 2015, the year Wonder Woman cameod in Batman v. Superman: Dawn of Justice. By 2018, the goddess-hero name reached #184.

In several tellings, Donna is an orphan rescued by Diana. She’s not an Amazon, but she’s raised on Themiscyra. She also becomes Wonder Girl.

And another Wonder Girl name! On the television series, she was played a very young Debra Winger. Her backstory? She was Diana’s little sister.

A form of Helen in use in modern Greece, and the name of a minor Amazon character.

Hippolyta might be tough to wear, but it belongs on this list, because the name belongs to the Amazon queen. Several actors played her during the 1970s series’ run, including Cloris Leachman. She’s mom to Diana, and in some versions, briefly served as Wonder Woman herself. While in Man’s World, Hippolyta answered to Polly. So if you’re toying with this name, but eager for a fallback nickname? There you go.

An Amazon and a powerful sorceress. Magala is almost unknown besides the character, but Magali is a rare Occitan form of Magdalene. That name comes from Magdala, a village mentioned in the New Testament. It means tower, which sounds like inspiration for an Amazon name.

Diana’s BFF on Amazon Island was Mala. The character has been around as long as Wonder Woman, appearing with her way back in 1941. It’s a Sanskrit name meaning necklace.

An Amazonian priestess, mentioned briefly in the movie.

In 1973, Diana means a warrior who matches her skills exactly. She’s Nubia, sometimes considered DC Comics’ first black female superhero – and Diana’s sister, or even long-lost twin. An ancient African empire, Nubia once stretched across present-day Egypt and the Sudan. The  name may come from the Egyptian word for gold.

In ancient myth, Pallas is a name associated with Athena. In Themyscira, she’s a blacksmith.

In a 2013 short, this was the name of another Amazon, and appeared as a minor character even earlier.

Another Amazon from a 2009 animated direct-to-DVD installment in the Wonder Woman franchise.

A minor Amazon character, distinctive because the name is French, rather than Greek or Roman.

Like Donna Troy, Sofia wasn’t born an Amazon. Instead, she was a Greek terrorist who decided to change her ways. After spending time on Themyscira, she became an honorary member.

Yet another minor Amazon, but one with an intriguing name. It may be the feminine form of Zelos, from the Greek word for zeal.

Note on sources: I’m indebted to Carol Strickland’s Wonder Woman Central, the DC Comics Database, and The Wonder Woman Wiki for much of the information in this post. Though, yes, I’ve seen pretty much every episode of the original series. And had the Underoos. And yes, I can’t wait for the next movie!

Would you consider any of these Wonder Woman baby names for a daughter? 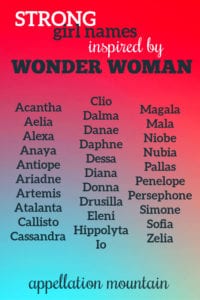