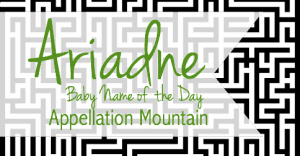 Ariadne is a clever, courageous mythological figure – and a name that debuted in the US Top 1000 in 2014.

This Baby Name of the Day post was originally published on May 9, 2008. It was revised in August 2010, and substantially revised and reposted on March 7, 2016.

The original bearer of the name was a princess, daughter of King Minos. Their kingdom had defeated Athens in battle, and the price the victors demanded was steep.

Each year, Athens was required to send seven young men and women for sacrifice to the Minotaur, a vicious half-bull who stalked his prey in a maze.

When our story begins one of the fourteen was a spoiler – the valiant Theseus, who volunteered. Shades of The Hunger Games. But Theseus believed that he could kill the beast and end the practice of sacrificing Athenian youth.

If not for the princess, Theseus would long be dust in the depths of the labyrinth. The princess lent him a suitable sword and a ball of red thread, so he could mark his path into the maze – and back out again.

That makes Ariadne a hero name, too.

Like many a Greek myth, Ariadne’s story ends tragically. But it’s oft-repeated in music and the arts. Richard Strauss wrote an opera about her, and there are poems and paintings and plays, too. In brief: Theseus abandons her. She marries the god Dionysius, and in some accounts, becomes a goddess, though a happily ever after proves elusive.

Plenty of names from Greek myth have made their way into more general use, but women named Ariadne tend to be clever, at least a partial reference to the original:

Something of the original heroine remains in the name.

Ariadne: Beyond the Labyrinth 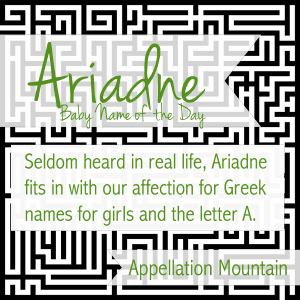 The name was used in the real world, at least sometimes. Around the year 500, the name was worn by a Byzantine empress. And there’s an even earlier Saint Ariadne, who died around the year 130 after refusing to participate in pagan rituals.

The names’s meaning is straightforward: it comes from the Greek words ari and adnos -most holy.

It’s the name of a butterfly and an algorithm, and there are other references throughout the natural world.

It’s also the name of popular Mexican actress Ariadne Diaz, who had a big year in 2012 and 2013, starring in telenovela La mujer del Vendaval, and followed it up with more television work in 2014.

In 2014, the name entered the US Top 1000 for the first time ever. Credit the combined force of a popular Spanish-language star, our affection for Greek names for girls, and the ongoing interest in A names for our daughters.

It suggests that Ariadne could be a mythological name to watch in the coming years.

What do you think of Ariadne? Would you consider it for a daughter, or do you prefer Ariana/Arianna?