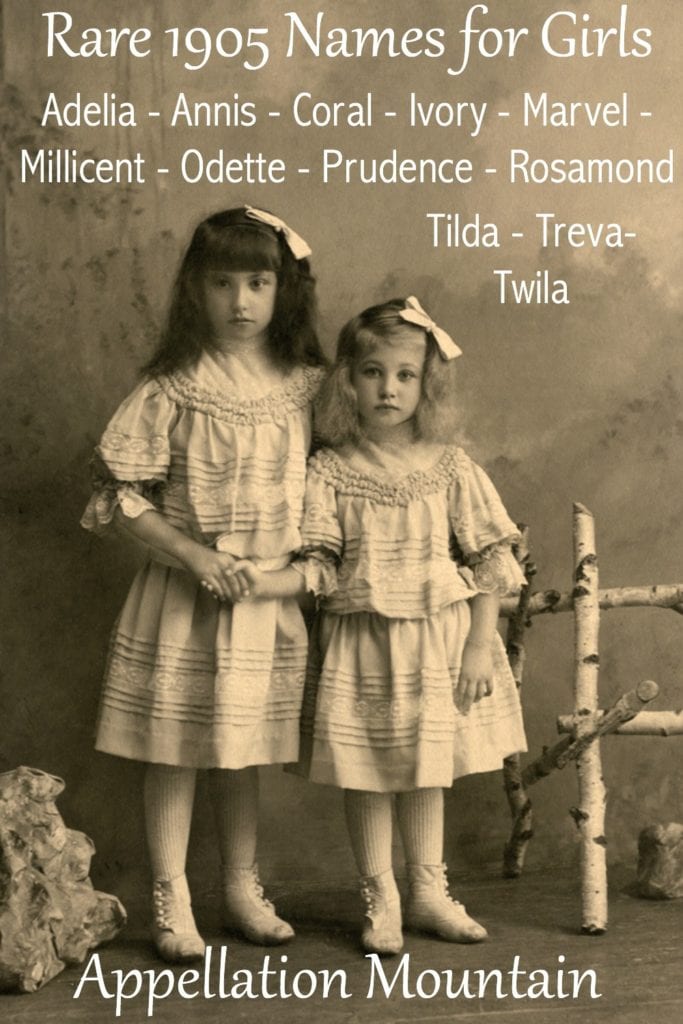 Rare 1905 girl names range from the so very modern to the still slightly dusty. While a few of these are in the Top 1000 today, many are just as rare now as they were more than 100 years ago.

As this is the third in a series, it gets harder and harder to find names that fit those criteria! And yet, names never disappoint.

Here are a dozen gems culled from rare 1905 girl names.

Adelia – Take all of the Addie names, add our beloved -lia ending, and the result is the appealing Adelia. An elaborated form of Adele and company, Adelia ranked in the Top 1000 regularly into the 1920s. Today, the name has become obscure, but seems poised for rediscovery.

Annis – Agnes strikes some as too dusty; while others find Anna and Annabelle too mainstream. Annis could represent the middle ground. A medieval form of Agnes, the name regularly charted on the fringes of the US Top 1000 through the 1930s. Today it’s rare, but very wearable – though it might be misunderstood as anise.

Coral – In 1905, Coral was heading towards obscurity. And yet, the name actually appeared in the US Top 1000 many years, a feat the name hasn’t repeated since 1992. Cora names are enjoying a moment, though, so this oceanic appellation might have a chance at a comeback.

Ivory – You’re forgiven if you guess Ivory is a modern borrowing, a mix of Avery and Ivy and Ruby, too. While Ivory recently returned to the Top 1000, the name fared well in the late nineteenth and early twentieth centuries, too, hugging the edges of the Top 1000. The name also fits with musical choices like Aria and Cadence.

Marvel – Another modern-sounding find among the rare 1895 baby names is Marvel. Marvel charted for girls every year from 1892 through 1975. And then we forgot all about this bold name. In fact, this name was popular it breaks my rules – Marvel made the Top 500 from the 1910s through the early 1960s – an impressive run. And yet, Marvel is nearly always dismissed as a daffy twenty-first century baby name.

Millicent – The popularity of Molly has inspired some parents to rediscover Millie. Could Millicent be next? Sweet and lady-like, the name has rarely appeared in the Top 500 at all, and certainly couldn’t be found there in 1905 – or 2015. But it might make a great choice for parents seeking a formal name for Millie.

Odette – Odette dominated headlines a few year ago as a hipster name extraordinaire. Actually, Odette is a member of the Otto family, with French roots and ties to Swan Lake. The name barely cracked the Top 1000 around 1905, sneaking in just long enough to make this list.

Prudence – Dear Prudence. Despite the enduring Beatles song and our increased interest in virtue name, Prudence languishes in style limbo. The name last appeared in the US Top 1000 back in the 1940s, and today is seldom heard. Television’s bewitching trio on Charmed boosted the names Piper and Phoebe. Sister Prudence – called Prue – also bumped up in usage, but remains rare. It could make the perfect familiar, but seldom heard, pick for a daughter.

Rosamond – Rose names have always attracted fans. But somehow, Rosamond remains overlooked. Originally Germanic, the name is sometimes associated with the Latin phrase rosa mundi – rose of the world. Spelled Rosamund, the name has never ranked in the Top 1000.

Tilda – Matilda seems like a fashion-forward choice today. And Tilda Swinton ought to put her stage name (she was born Katherine Matilda) on the map. But so far, Tilda stays with the rare 1905 baby names – though I did hear a school-aged Tilda the other day, and it wore beautifully.

Treva – Confession: I don’t know anything about Treva’s roots. But there it is, regularly charting in the US Top 1000 – though never in the Top 500 – from the late nineteenth century through the early 1970s. With a modern sound and a long, mysterious history of use, Treva feels like a name prime for discovery.

Twila – Dance Twyla Tharp put the ‘y’ spelling of her name on the map, but Twila fared better circa 1905. A rarity probably borrowed from our word twilight, Twila is a night-owl name for a girl that would make an intriguing choice today.

Would you consider any of these 1905 rare girl names for a daughter? 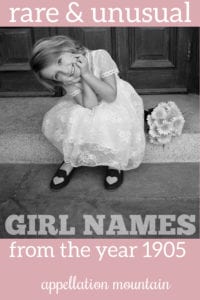