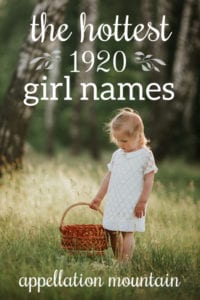 No, not the Top Ten names from a century back. Instead, these names were racing up the popularity charts back when the Twenties were just starting to roar. To be considered, a name had to gain substantially between 1919 and 1920, but it also had to feel like a name that could work in 2020.

A word of caution: data from the earliest decades comes with some serious limitations.

Still, if this is what I’d had to work with a hundred ago? These are the thirteen names I would’ve been blogging. (Or … submitting as an article to The Ladies’ Home Journal? Did they run such articles then?)

Bonus? I think each and every one of them has potential today, too. 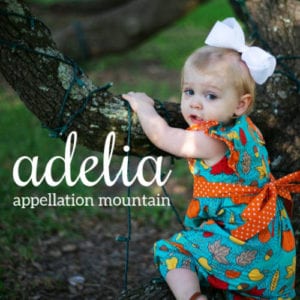 Addison and Adeline – choose your spelling – are the Addie names of this moment. But Adelia could be promising, too. It falls midway between the other Ad- names and Amelia, and offers just enough history of use to feel like an established choice. Like many an Ad- name, it comes the Germanic adal- meaning noble. Saint Adela lived in the seventh century; William the Conqueror gave the name to a daughter in the eleventh century. Adelia is simply an elaboration of Adela. It last appeared in the US Top 1000 way back in 1928, which means it could be ready for revival right about now. 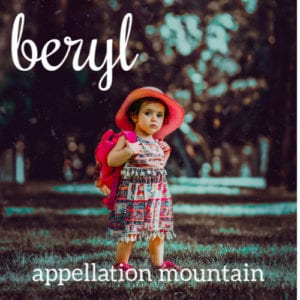 I’ve written about Beryl before. A lovely shade of green gemstone, this name brings to mind pioneering aviatrix and adventurer Beryl Markham. Markham earned international renown after making the first solo, non-stop flight across the Atlantic, east to west. But that wasn’t until 1936. I’m not sure what caused the 1920 spike, but it represents peak popularity for the name. One more fun fact: it’s a Downton Abbey name, though seldom heard. The cook, Mrs. Pattmore, is also a Beryl. The name left the US Top 1000 after 1957. If Ruby and Pearl can be girls’ names, why not Beryl? 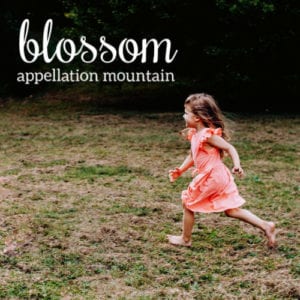 It sounds like a new word name for the twenty-first century, but like so many modern favorites, Blossom has roots. You might think of Mayim Bialik’s star turn as quirky-but-lovable teenager in 1990s sitcom Blossom. At one point, we learn that her character was named for jazz singer Blossom Dearie, whose long career spanned five decades, beginning in 1952. She once said her unusual name referred to peach blossoms brought to her mother on the day she was born. That’s possible, but the name appeared in the US Top 1000 even before the Dearie family welcomed a daughter. 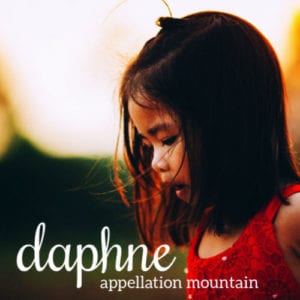 A sparky alternative to chart-toppers like Chloe and Penelope, Daphne comes straight from Greek myth. When the god Apollo pursued her, she was turned into a laurel tree to escape his advances. That makes this a nature name, too. Steadily ranked in the US Top 1000 over the decades, Daphne began a modest rise in 1920. But the name is actually far more popular today – reaching #383 by 2018. Memories of Scooby Doo’s damsel-in-distress Daphne Blake might give some parents pause, but I think it feels vintage. Django Reinhardt’s sprightly jazz composition by the name appeals, too. 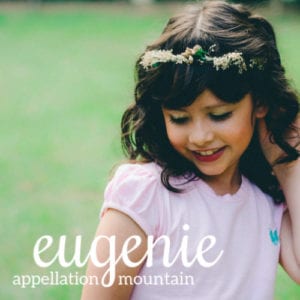 Eugenie appears in 2020 headlines thanks to Queen Elizabeth II’s granddaughter, Princess Eugenie, currently tenth in line to the throne. (Though since her recent marriage, she’s also known as Mrs. Brooksbank.) It was a thoroughly surprising choice, though it had some royal history. Pronounced you JAY nee, it’s the French feminine form of Eugene, which means well born. The 1920 rise in use could be due to Queen Victoria’s granddaughter, Princess Victoria Eugenie, who became the Queen of Spain through marriage. While Eugenie rose dramatically in 1920, that would the name’s last year in the rankings. 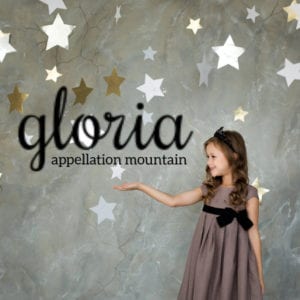 Gloria sounds Olivia and Cecilia and other ends-with-ia girl names enjoying a moment. It’s specifically religious, first used as a given name in reference to one of the Virgin Mary’s Spanish titles, Maria de Gloria. Silent film star Gloria Swanson rocketed to fame in a series of 1919 movies for Paramount Studios, directed by the legendary Cecil B. DeMille. No surprise that her glamorous name rose swiftly in use in 1920, reaching the Top 100 by 1922. The name remained a Top 100 favorite into the 1960s, so it feels a little past its moment now – except with parents like Maggie Gyllenhaal giving it to a daughter in 2012, maybe that’s about to change. 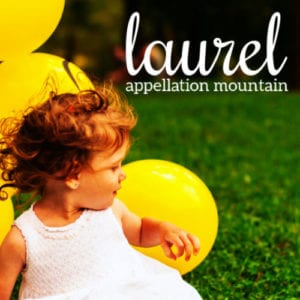 So many nature names, like River and Willow, are gaining in use. Laurel fits right in. It even has that same tailored, but just feminine enough vibe shared by modern favorites like Winter. What it doesn’t sound like is a vintage pick. Except it is just that. Traditional Laura appeared in the US Top 100 from 1880 right into the 1930s. So perhaps Laurel caught on as an alternative? The name didn’t peak until the 1950s. And while it’s rising again today, it’s yet to reach those mid-century heights. Still, it belongs with the hottest 1920 girl names – a choice that straddles the traditional and the novel. 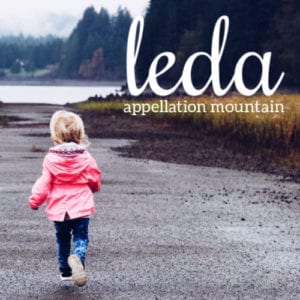 In Greek myth, Zeus courted Leda in the form of a swan, and their children together featured in many a story. (Remember the beautiful Helen of Troy? She’s their daughter.) The similar Leta ranks among the hottest 1920 girl names, too, though it probably comes from the Latin laetus – happy. Both names sound the same in American English. And they fit, too, with so many names we’re giving to girls these days, from Leah to Luna to Lyla, the next entry on this list. Leda and Leta feel sleek and sophisticated, but still nicely wearable. If you’re after something different that’s both vintage and modern, Leda/Leta works. 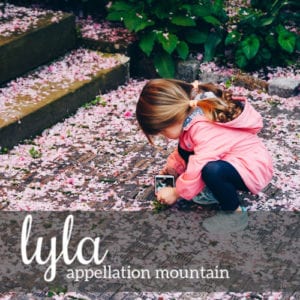 Here’s the thing about Lyla: you can spell it at least four different ways in the current US Top 1000, but this – L-Y-L-A – is the most popular as of 2018. Looking at 1920 girls names, Lila led the pack, with Lyla a fast-rising alternative. We know that dominant spellings can and do change – Zoey replaced Zoe and Kaitlyn eclipsed Caitlin. But those happened in a short period of time. The Lila/Lyla switch is more like Lillie/Lila – it took place over generations. Lyla sounds completely at-home in the twenty-first century, a culture-spanning name with a cool, current vibe. But it was every bit as appealing back in 1920, too. 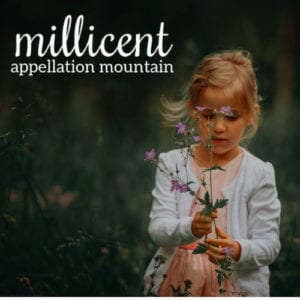 It’s no secret I’m wild about Millicent, and think this name is way overdue for revival. We’ve already embraced Millie, a name that first made a comeback in the UK, but has worked its way up US charts over the last few years, too. And while lots of formal names can lead to Millie, Millicent seems like one of the most obvious. It sounds delicate, but comes with a powerhouse meaning: work + strong. The name feels like a logical successor to other traditional choices we’ve loved for much of the twenty-first century. Think Abigail or Evelyn, Charlotte and Eleanor. Millicent fits right in. 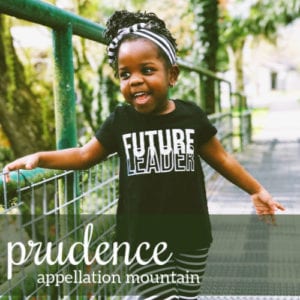 Prudence comes with three very different images: the Pilgrim girl on Plymouth Rock, all dark dresses and hardship. Then there’s ethereal, floating 1960s of trippy Beatles single “Dear Prudence.” And lastly, there’s Prue, the eldest Halliwell sister on 90s supernatural series Charmed. The name suggests an old school virtue, but prudence also means foresight or wisdom. That makes this a name for a future judge or elected official, a CEO or a design maven. Yes, it was white hot in 1920 – but that could mean that Prudence, with all of its charms, is ready to wear once again. 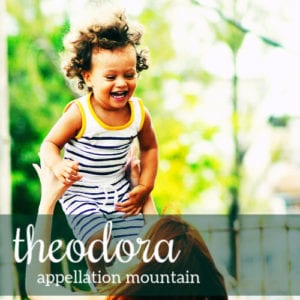 Theodore is rising quickly, a classic favorite for boys that feels fresh and fashionable in the new century. So why not the feminine form, Theodora? The even rarer Theodosia appears in a Hamilton lullaby, and Thea is racing up the US popularity charts. But so far, Theodora remains off our radar in 2020 – even though it was among the hottest of 1920 girl names. That could make a great opportunity for parents today. After all, Theodora is every bit as classic as Margaret, Katherine, Eleanor, or Elizabeth – and comes with at least as many built-in nicknames as those more popular choices. 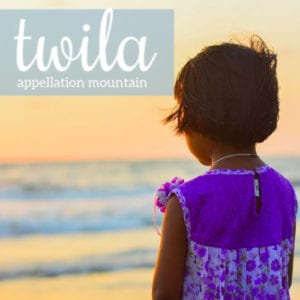 I can think of two references for Twila. The first is modern dance legend Twyla Tharp, which makes this a powerfully creative choice. And then there’s long-time Schitt’s Creek character Twila, played by Canadian-born actor Sarah Levy, sister and daughter to series co-creators Dan and Eugene Levy. While some names on this list rose briefly from 1919 to 1920, only to fall in another year or so, Twila was clearly on an upswing in the era. While it never became common, it would reach the US Top 500 a few years later. It’s rare today, but the meaning – either twilight or star – feels like a fit in our Stella-Luna age.

Those are my picks for the hottest 1920 girl names. Would you consider any of these for a daughter? 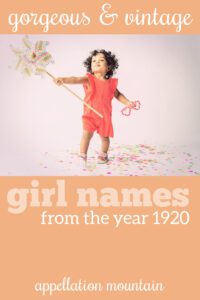