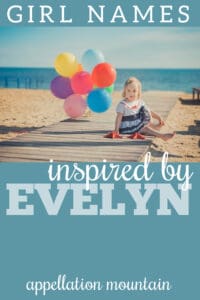 Back in the early twentieth century, Evelyn ranked in the US Top 20 – which is the top of the top.

But today? It’s even more popular.

That’s a lot of parents in love with Evelyn’s tailored, feminine sound.

You might, of course, opt for another Ev- name instead.

But plenty of names share Evelyn’s traditional, tailored qualities. If you love the name, but long for something slightly less common, these names like Evelyn are for you.

Classic, literary Beatrice is one of those great names everyone recognizes – but no one is using. Beatrix is even rarer, failing to rank in the current US Top 1000 at all.

Vintage Esther topped the popularity charts in the early twentieth century, just like Evelyn. And yet, it’s slightly under-the-radar right now, making it a great alternative to Evelyn, or possibly a name for her sister.

The name of a storied city and some legendary women, too, vibrant Florence blends vintage style with modern possibility. That makes it a rising favorite, but still just outside of the spotlight.

Lots of -lyn ending names are modern inventions. Oaklyn, maybe, or Jazlyn. But Gwendolyn has history to spare, a name that peaked in the 1950s, but feels timeless.

Traditional, lady-like Frances sounds quite refined. But it shortens to retro Franny and sparky Frankie, making this short name more versatile than it might appear. Plus, just as Evelyn has history as a unisex name, Francis/Frances shares some of that style.

Once a chart-topping favorite, Helen has mellowed to an overlooked classic. It feels like a logical successor to Eleanor, Hazel, and yes, Evelyn, too.

Irene sounds sensible and spare, but back in the day? This name belonged to a goddess, the personification of peace. From the ancient world to the new, Irene charted in the US Top 100 well into the 1940s, making it a familiar choice across generations. Today it’s a neglected classic, ready for revival.

Lou names are having a moment. Sweetly French Louise should fit right in, and indeed, the name is more popular now than it was circa 2010. But it’s still far from its previous peak of popularity, suggesting that Louise has farther to climb.

There’s something delightfully old school about Miriam. It’s an Old Testament name that feels rather granny chic – the kind of choice that’s too antique to consider until you hear it on a little girl, and suddenly it’s new once more. The same was true for Evelyn not so long ago!

Ruth feels serious and accomplished, a name with substance. It’s easy to imagine Ruth accepting her Nobel Prize. And yet, Ruthie is as free-spirited as any name could be – just like Evelyn and Evie.

It feels surprising that Sybil fails to crack the US Top 1000, especially after Downton Abbey gave us a host of girls answering to Cora, Violet, and even Marigold. But it’s true – which means this meaning-rich, ancient name is available for parents seeking a strong, but underused, name for a daughter.

Lively Vivian is a name that’s tough to pin to any decade. It’s bright and energetic, almost a perfect substitute for the more popular Evelyn.