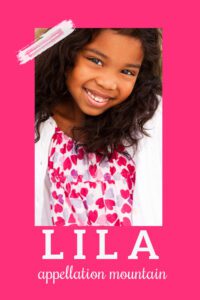 Thanks to Frances for suggesting our Baby Name of the Day.

Lila’s origins are much debated.

It can come from an Arabic or Persian word meaning night, dark, or possibly dark beauty.

In Sanskrit, the baby name Lila refers to amusement or play.

The color lilac – and the flower – are known as lila in German Dutch, Spanish, and a handful of other languages.

Some might choose the baby name Lila as a feminine form of Lyle, which comes from the French l’isle – island.

And here’s a completely twenty-first century twist: spell the name Lyla, and it could be an acronym for Love You Lots Always.

Factor in other spellings and related names, and even more potential origins and meanings attach to the baby name Lila. Not bad for a mere two syllables, four letters!

Even without all of this backstory, the baby name Lila would almost certainly be on the rise.

That’s because we’ve been wild about L-l names for years now.

Of course, spellings of Lila and Layla alone make up a significant chunk of the current US popularity chart.

But how did the baby girl name Lila enter general use in English in the first place?

To be clear, the name was in use much earlier.

But as a young man, Byron embarked on a Grand Tour of Europe, including Turkey.

Not long after, he penned The Giaour, a tale of a harem girl in love with a Christian.

Worth noting: giaour is an insulting term for a non-Muslim.

Published in 1813, when Byron was newly famous, it’s the tale of a harem girl named Leila.

She falls in love with an outsider – the Giaour. When her duplicity is discovered, her husband puts her to death by drowning. Her lover takes revenge, killing her husband and murderer, before repenting and entering a monastery.

It’s easy to argue that the baby name Lila isn’t exactly the same as Lila. But it seems like Byron gets credit for introducing the name to the English-speaking world.

Another Leila appears in his later epic poem, Don Juan.

So where did Byron find the name?

It turns out that Leila would’ve been an obvious choice for a romantic – and tragic – figure.

Medieval writers told of Layla and Majnun. It may have been based on a real story from the 600s.

The poet Qays fell madly in love with Layla. Obsessed, maybe, earning the nickname Majnun – crazy. Layla’s dad considered Qays an unacceptable match and arranged for her to marry another.

She dies – some accounts say of heartbreak. And he dies, too, after wandering in the wilderness.

Byron knew the tale. He compared it to Romeo and Juliet. In fact, a popular translation of the story was completed by Isaac D’Israeli in 1799, so lots of Byron’s contemporaries knew of Leila.

Taking a name of Arabic origin and changing the spelling from “ei” to “i” is easy to imagine, so Lila probably entered English primarily as a simplified spelling of Leila.

English speakers nearly always pronounce Lila with a long I sound, as in Tyler and Kyle.

Layla takes the long A of Aidan and James.

Leila, though, can be tricky. It could sound like Lila, Layla, or LEE lah, as key and tea. (Then again, Mila is pronounced with an ‘ee’ sound, too.)

In recent years, the rise of so many similar names blurs the lines even more. Looking at the current SSA Top 1000 as of 2021:

Even disregarding the A and E versions, that makes four spellings in the rankings: Lyla, Lila, Lilah, and and Lylah.

Regardless of spelling, the name clearly surged in the twenty-first century – though Lyla only recently overtook Lila as the more common version.

The baby name Lila has always appeared on the fringes. Plenty of fictional figures answer to the name, including:

In real life, Kate Moss is mom to a daughter named Lila Grace, now starting a modeling career of her own.

All together, the baby name Lila is rich with timeless charm. Effortlessly international, Lila works for nearly any family, whether you’re after underused traditional-ish picks or modern favorites.

The only challenge, of course, is that Lila – with all of those spellings! – is quite popular. Add in names like Lily and Lola and Lula, and it’s easy to imagine that Lila could be one among many. Spelling, clarifying your preferred spelling, and repeating your chosen pronunciation seems like an ongoing task.

And yet, with so many powerful qualities, the baby name Lila might be worth the risk.

Would you consider the baby name Lila? 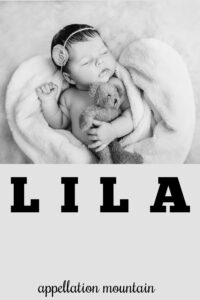 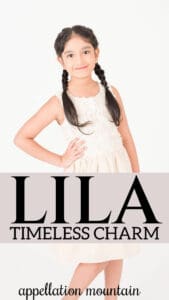