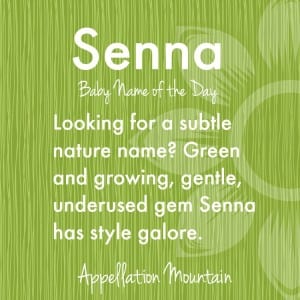 This nature name sounds like lots of traditional choices for girls, but it’s far rarer than Emma.

Thanks to Amanda for suggesting Senna as our Baby Name of the Day.

You won’t find a flower called senna next to the gerbera daisies and roses, but it’s a plant, I promise you. In fact, it’s a whole genus of flowing plants, including shrubs and trees. They’re big in the tropics. The picture shows Senna Alexandrina – which I can’t help find a swoon-worthy first/middle combination! Though a word of caution … it appears that senna alexandrina was commonly used as a laxative. Moving on …

While there’s plenty of variation, the flowers are almost always yellow, which lends the name a cheerful vibe.

I can’t find much in the Victorian language of flowers about Senna – perhaps because it wasn’t widely available? But there was something called bladder-senna, which symbolized frivolous amusement.

Another trivia point: the plants used to be considered part of the genus Cassia – the gorgeous, underused names just keep on coming!

The name comes from the Arabic word sana. There’s an Arabic girls’ given name, Sana, which means splendor. I’m not certain they share the same roots, but it seems likely.

It’s been used as a name in very small numbers since the 1940s. It could have emerged spontaneously – two syllable, ends-in-a is an enduring formula for a girl’s name. Just like Jessa comes from Jessica and Jesse, Senna could owe something to names like Serena and Selena.

There’s also the similar-sounding, but masculine Cinna. Cinna is a family name from ancient Rome. It’s attracted more attention thanks to a character in The Hunger Games universe. And while botanical names tend to lean feminine, maybe it’s Cinna’s influence that makes me think Senna could work for a boy, too. Or maybe it’s the late race car driver, Ayrton Senna, that raises this as a possibility for a boy.

Senna: In the Wild

Still, that’s far from common. Name your daughter Senna and you might have to repeat and even explain the name.

And yet Senna succeeds for lots of reasons:

Where are parents hearing Senna? Towards the end of the Twilight series, there’s a vampire by the name who comes to Washington from the Amazon, an ally for Bella and Edward. She’s a minor character, though, so there’s little danger that Senna will be instantly recognized as a Twilight name.

There’s also a character in the Avatar series by the name. She’s the mother of Korra.

On a very different note, Lady Davina Windsor Lewis – 28th in line to the British throne – has a young daughter by the name. She’s 29th in line.

All of this makes Senna just a little bit different – in a good way! If you’re after a rare name with a restrained quality, Senna could be just the name for you.

What do you think of Senna? Could this nature name catch on? Do you like it better for a boy or a girl?