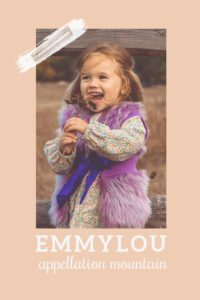 The baby name Emmylou makes for a sweet smoosh of a name with a little bit of country cool.

Thanks to Katie for suggesting our Baby Name of the Day.

Em names top all the lists.

Emma ranked in the US Top Ten from 2002 onward, including six years in the #1 spot. Before that, Emily charted in the Top Ten from 1991 until 2016, spending twelve years at the very top.

As for the Lous? Luna and Lucy are favorites, but plenty of Lou/Lu names sound quite stylish today, too. And on the boys’ side, Lucas appears in the current Top Ten.

So sound-wise, the baby name Emmylou makes all the sense in the world, a combination of popular sounds.

And yet, Emmylou is actually relatively rare. It might be as obscure as other smoosh names – think Annagrace or Islarose – except for a singer.

Girls have been named Emmylou in small numbers over the years. Doubtless even more have answered to Emmylou.

But those numbers would be tiny without the singer Emmylou Harris. (Yes, it’s her given name.) Since the 1970s, Harris has earned 14 Grammys, including the Lifetime Achievement Award.

Her eclectic style spans bluegrass and folk, country and rock. She was part of the Where Brother O Art There? soundtrack in 2000; her work appears on the soundtracks for Brokeback Mountain and Nights in Rodanthe. Harris has collaborated with everyone from Gram Parsons to Bob Dylan. She toured with Elvis Costello in the early 2000s.

And yet, somehow, she’s not quite a household name.

But there’s no question that Emmylou Harris’ career inspired parents to choose the baby name Emmylou.

Harris collaborated with Gram Parsons in the early 1970s. By 1976, she was earning Grammy and CMA nominations. And she just hasn’t quit since.

In 1978, the year after she won her first Grammy, 12 girls were given the baby name Emmylou.

But the numbers begin to climb over the last dozen years. In 2020, 78 girls were given the baby name Emmylou – a new high.

The first comes from Australian artist Vance Joy, released on his 2013 album.

Nearly anyone having a baby now has lived their entire life during the career of Emmylou Harris.

The singer brings something to the song: integrity. Creative courage. Grace and grit.

She’s not a pop star, and her songs don’t shy away from difficult topics. (If you’ve never heard her work, start with “Red Dirt Girl.”)

Her artistry transforms the baby name Emmylou. It’s not just a random double name. Instead, it carries a certain Southern sensibility, a complete and meaningful choice.

Of course, it could certainly be short for something longer: Emma Louise, Emily Lucille, or something more extravagant. Emmeline Ludovica, maybe?

If you’re looking for a name that mixes a casual, country vibe with plenty of backbone, Emmylou could be your name

What do you think of the baby name Emmylou? 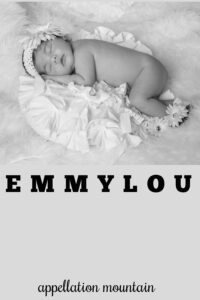