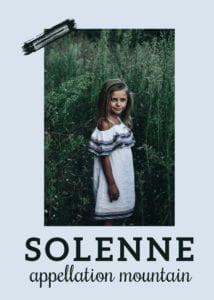 The baby name Solenne sounds tailored and strong, plus it is so very rare.

It frequently appears on lists of French names for girls. And Solange Knowles, younger sister to Beyonce and an accomplished singer in her own right, makes it famous. (The Knowles family has plenty of French and Acadian heritage on her mother’s side.)

It turns out that the baby name Solenne shares the same roots as Solange. And while Solange enjoyed popularity in France way back in the 1930s, it’s Solenne that’s been more familiar in recent years.

Solenne sounds serious, and indeed, the meaning has a certain weight. It comes from the Late Latin name Sollemnia.

Legend gives us a Saint Solange, or Solemnia. Born a poor shepherdess, Solange devoted her life to God. But then a handsome noble spotted her. When she refused his advances, he kidnapped Solange. She continued to resist, and her cut off her head – but in that grand, medieval tradition, she miraculously picked up her own head and walked to the church in town.

While the historic record reveals little confirmation of her life, the place name remains on the map.

So what, precisely, does solemn mean?

It lends weight to the baby name Solenne, after all.

Solange fared well in the 1930s in France, but the baby name Solenne peaked in the early 1980s. But it was never wildly popular. At its greatest heights, 240 girls received the name in 1982.

Two other spellings mix into the baby name Solenne’s story.

First is Solene, or Solène in French. In American English, we’d almost certainly pronounce it with a long ‘e’ sound, like Arlene, Darlene, and Marlene – which might make this a non-starter for 2020. Still, Solene was given to 21 girls in 2018. That’s a small enough number that both Solene and Solenne might represent primarily French-speaking families.

In France, parents currently favor Soline, which has ranked in the Top 100 in recent years. But if Solene makes Americans read Marlene, Soline feels even less like a given name. True, we have Caroline and Evangeline and Celine. But their pronunciations can be debated. (caroLINE? caroLYNN? evangeLEEN? evangeLYNN?) The French do say soLEEN, which, again takes us back to mid-century favorites like Darlene.

Unfamiliar names, no matter how lovely or meaningful, tend to be mispronounced. Solenne picks up on names like Vivienne and Adrienne. It’s not terribly common, but it seems like Solenne would be a little easier to spell and pronounce than some choices.

Overall, Solenne combines a strong and serious meaning with a sophisticated, distinctive sound. It falls somewhere between lush Sophia and spare Claire. Feminine, but not frilly or elaborate. The meaning makes it something of a virtue name, though a subtle one. And it’s among the rarest of choices for a daughter – one that will stand out in a crowd.

What do you think of the baby name Solenne? Would you consider it for a daughter?