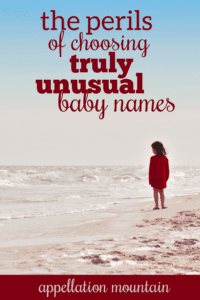 It’s no secret that I love unusual names. I’ve written before In Defense of Atlas and Apple: Ten Reasons Unusual Names Aren’t a Problem, and I haven’t changed my mind.

But I do have my hesitations, and a recent exchange with the mom of a very unusually named child got me thinking: what are the downsides to having a genuinely uncommon name?

An unusual name means you’ll be a snap to find on Facebook, in a Google search, on archives that have yet to be imagined. It’s always been true if your surname is unusual. For some, that’s a bonus. But if privacy is important, you’re better off with a more common given name. The challenge is, of course, that many parents want a distinctive name when they’re expecting. But years later, it’s Gillespie or Sonata who longs for a little more anonymity.

#9 Prepare to be misunderstood.

One of my long-time favorites was Sidonie, an obscure French feminine appellation from a medieval saint’s name. But can you imagine introducing yourself as Sidonie? Despite the three-syllable pronunciation, you’d likely spend your days answering to Sidney and Cindy. Of course, you can repeat yourself and explain your name. But that might get old. Emma, I’d wager, is rarely mangled.

Maybe we should all recognize Hermione and Orion, Caspian and Ariadne. But we don’t, or at least, the librarian at story hour, the registrar at the nursery school, the person who embroiders the mouse ears at Disney World might be so surprised to meet little Opal that she’ll ask the spelling again just to be sure she’s hearing you right. (Well … maybe not Disney World. Mouse Ear embroiderers must hear some interesting choices. Wonder how I apply?)

#7 Do you have a thick skin, or wear rose-colored glasses?

Unusual names provoke unusual responses, ranging from parents impressed that you used something so stylish and daring, to those who truly believe little Nikita Soren is in for a lifetime of mockery thanks to your senseless choice. Nancy’s sweater analogy is particularly useful here. I guarantee you that not everyone thinks Clio is a great name – they just haven’t got a clue what else to say when I introduce my daughter.

#6 Speaking of thick skin, it’s not standard-issue for children.

If you’re a professional songwriter and musician, your kid Lyric might find her name as ordinary as Sarah, especially if her school community is filled with other artists’ kids. But even if it works for you, it may not work for your kiddo. Of course, the opposite is also true – some kids hate sharing their Top Ten name – so this isn’t a compelling reason to play it safe. It’s just another factor to consider.

#5 The impact of a fictional character or headline-maker who shares their name is considerable.

This is my main argument for not naming your daughter Kimora. While she’s doing well, it’s one thing. But there’s nothing worse than sharing a name with a celebrity or elected official who is much in the spotlight for the wrong reasons. You can’t control it, of course. But if the scandal-plagued celeb has a fairly ordinary name – like Michael – the association won’t stick. Now try Tiger. Imagine you inventively named your son Tiger before Woods went pro. Your teenager is now mightily annoyed every time he’s asked if he likes golf.

Grace might be clumsy, but she’s one in a crowd. It’s more exceptional when your Serenade can’t sing, or Everest turns out to be short for his age.

#3 Nicknames present their own challenges.

I long assumed that my friend Andi was Andrea, only to discover it was short for Andromeda. While choosing an unusual name with a common short form is one way to soften the impact of #5, it isn’t without problems. It almost intensifies the impact of the real name.

The world is changing – fast – and more names feel truly unisex than ever before. But will it bother you if your child’s name leads to occasional misunderstandings?

Note that I’m not saying should it bother you. We’re often surprised to discover that we care – or don’t.

My son’s nickname is Aly.  When he was a still a toddler, he made friends with another boy at a playground. When the other parent heard me call his name, she said to me, baffled, “Oh, I thought he was a boy.”

Araminta and Evander are unusual, but probably won’t face this particular hurdle. But with Xael or Ciel, this is a factor to consider.

#1 You’ll tell the story of the name again and again.

If you’ve chosen an unusual name for the right reasons – for a personal meaning, in honor of literary or notable namesakes, to remember a loved one or emphasize cultural ties – this is a tiny thrill, a chance to explain why you named your daughter Svetlana after her Russian grandmother, or how you’ve always admired the architect Eero Saarinen.

On balance, I think the reasons to hesitate before using an unusual name are just that – things to consider before you proceed. And yet, parents often report frustration that the rare gem they’ve discovered isn’t universally beloved.

It makes me think that the moment of hesitation should sometimes be longer.

Did you choose unusual names? Or consider them for your children? Did any of this factor into your decision? What considerations have I missed? 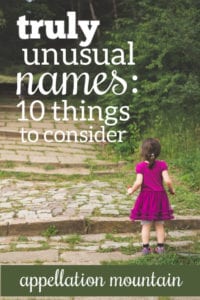 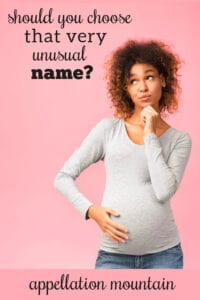