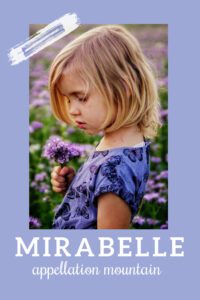 Thanks to Elena for suggesting our Baby Name of the Day.

Our word miracle comes from the Latin mirabilis – wonderful, marvelous.

Poet John Dryden penned Annus Mirabilis in 1667 to refer to the events of the prior year. Here’s the thing, though – 1666 was a year packed with disasters, including the Great Fire of London. In addition, there were several military victories, and, of course, the fire was extinguished and the city rebuilt. So Dryden’s “Year of Wonders” or “Year of Miracles” entered into the common parlance.

There have been other years referred to by the term since.

It makes the baby name Mirabelle virtuous and bold. But because it’s not immediately connected to our word miracle, it’s slightly subtle, too.

To date, the baby name Mirabelle has never appeared in the US Top 1000. Mirabel, likewise, is quite rare.

Despite Mirabelle’s rarity, this name boasts history aplenty. It was used in the Middle Ages. The Dictionary of Medieval Names from European Sources includes an entry for Mirabel, including Mirabella in Italy.

By the seventeenth century, playwright John Fletcher used Mirabel as a masculine name in his comedy The Wild Goose Chase.

First performed some time around the year 1621, the play proved popular and was much performed in the following decades. It’s the tale of a handsome rake, all about romance but disinterested in marriage, despite the machinations of his father. (Mirabel is the Wild Goose.)

Fellow playwright William Congreve borrowed the name for his leading man, Mirabell, in The Way of the World. Again, he’s not exactly a hero, and the character’s names aren’t really drawn from real life. (Others include Mirabell’s love, Millamant, along with her aunt, Lady Wishfort, who stands between the pair’s marriage.)

In the 1800s, Mirabeau Lamar served as president of Texas in the 1830s, back when it was a republic.

If you’ve ever visited Salzburg, Austria, you might think of Scholss Mirabell, a seventeenth century palace famed for its garden, as well as its Baroque design. Fun fact: scenes from The Sound of Music were filmed in the gardens, including – famously – the “Do, Re, Mi” song.

Long before that, the Crusaders named a stately manor home Mirabel. It stood in modern-day Israel. The area, including Mirabel’s ruins is now part of a national park known as Migdal Afek.

In Italy, Mirabella functions like Bellevue – the French for “beautiful view.” In this case, it comes from mira – view – and bella – beautiful. Mirabello and Mirabella appear on the map across the country.

It can also be heard in France, Canada, and elsewhere.

If you love edible names like Clementine and Olive, the baby name Mirabelle might appeal. That’s because it is also a type of plum.

Despite the association between plums and the color purple, this variety is a dark yellow color. They’re popular for making jam and tarts, as well as brandy. In the Northern Hemisphere, they’re in season from July to the middle of September, making this a seasonal choice for a late summer baby.

But never mind the plum or the gardens or any of the name.

Isabella, Annabelle, Arabella, Gabrielle, and Gabriella are some of the longer options. Ella, Stella, and Bella are big, too. And don’t forget Brielle, Aubrielle, Ariella, Noelle, and Antonella – to name just a few more.

It’s the name of the lost little girl’s doll in Gone, Baby, Gone, which turns out to be a major plot point.

In 2005, Claire Danes played by a character by the name in Shopgirl. The movie was based on a 2000 novella written by Steve Martin – the actor – who co-starred in the film adaptation.

Mirabella was a woman’s magazine in the 1990s, created by Vogue alum Grace Mirabella.

While Mirabelle, Mirabel, and Mirabella have never become mainstream favorites, they’ve gradually risen in use.

As of 2020, the baby name Mirabelle was given to 72 girls, down from a peak of 100 births in the year 2015. The sharpest rise followed the book and movie Shopgirl.

But all of this could be about to change.

In 2021, Disney will release Encanto. It will be the sixtieth film from Walt Disney Animation Studios.

Set in a fictional version of Colombia, it tells the story of the Madrigal family. All of the Madrigals possess magical powers – all, that is, except for daughter Mirabel.

While Disney movies don’t always send a name soaring, they can prove influential. And so the baby name Mirabelle – or Mirabel, or Mirabella – could be one to watch in the coming years.

What do you think of the baby name Mirabelle? 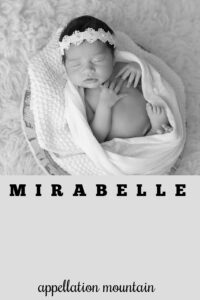