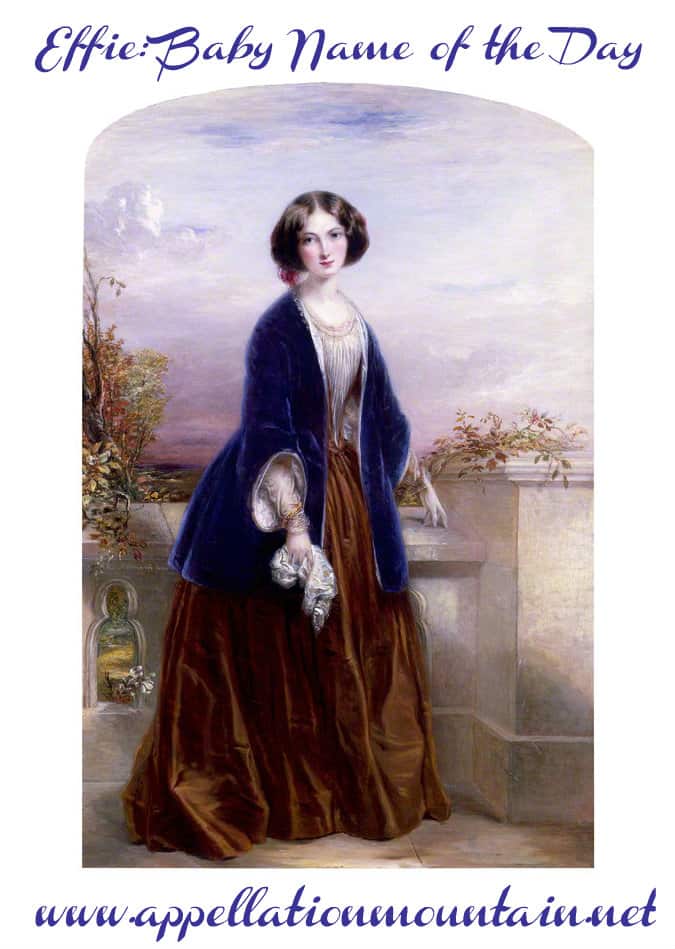 Quick – when’s the last time you met a Eupehmia? How ’bout an Oighrig?

Thanks to Photoquilty for suggesting the related Effie as Name of the Day.

Oighrig is Scots Gaelic, and by all accounts, she’s an old, old name. Anglicizations range from Henrietta to Erica to Effie. Let’s just say that she’s not terribly portable. As Effie caught on, Oighrig became equated with Euphemia, even though their origins are distinct.

Euphemia’s roots are Greek – eu means good and phem refers to speech – well-spoken. During the Middle Ages, she was fairly common.

Chalk up her popularity to the sufferings of Saint Euphemia, a mere girl when the governor of Chalcedon cracked down on Christianity back in the 200s. Despite – or because of – her noble birth and young age, Euphemia’s tortures were particularly gruesome.

Her relics suffered mightily, too. They were tossed into the sea, recovered and hidden and stolen by Crusaders. They eventually came to rest in St. Euphemia’s Basilica in Rovinj, Croatia.

But diminutive Effie ranked in the US Top 100 right through 1902, and remained ranked until 1959.

Then there’s Effie Trinket, the vain, rulesy, none-too-swift chaperone from The Hunger Games, known for chirping “May the odds be ever in your favor” before she pulls the next tribute’s name from the bowl.  Elizabeth Banks played her in the film adaptation.  She’s no role model, but the success of the story seems to have boosted Effie.

Is she ready for a comeback?  In our age of Hattie and Sadie, Effie fits.  Should you need to honor both Scottish and Greek roots, she’s the rare choice that works.

The elegant, ends-with-ia Euphemia might wear well in 2009, but she’s rich with nickname options besides Effie – think of Emme or Mia.

And yet, there’s something lovely about Effie – she’s simple and surprising at once.  If you’re heartbroken that Ellie and Sophie are so stylish, Effie might be the name for you.