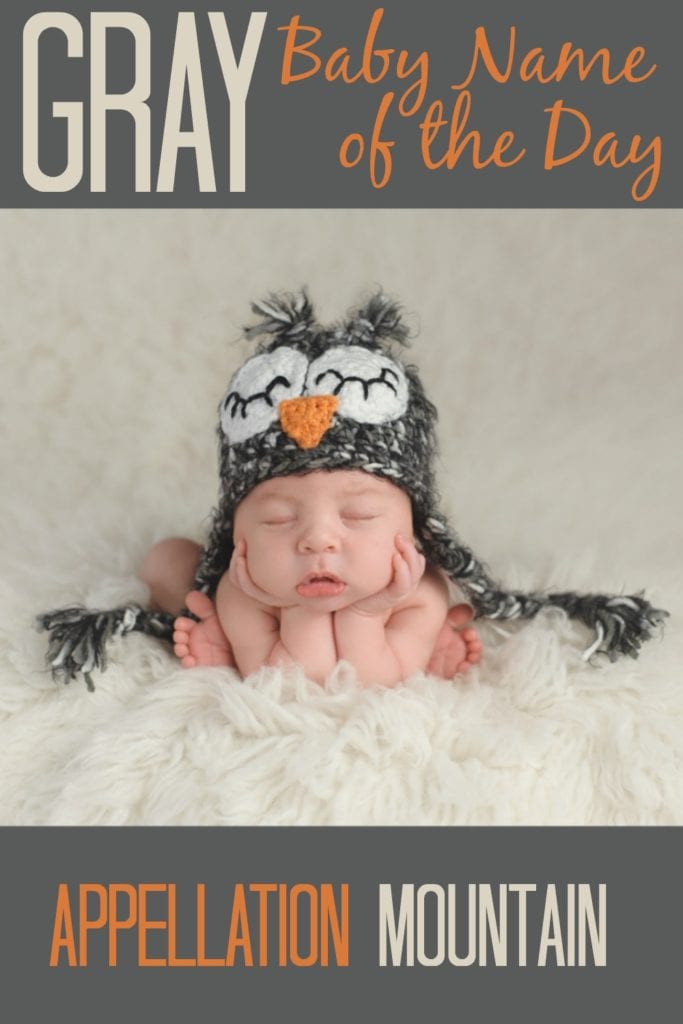 Gray leads the pack of possible color names for boys.

Thanks to Leah for suggesting our Baby Name of the Day, and Molly Sims’ new son for inspiring the update.

British English prefers the ‘e’ spelling. Sometime during the nineteenth century, the ‘a’  became standard in American English. By the time the Confederate Army took to the field during the US Civil War, they were “the boys in gray.”

Both spellings have been worn as surnames for generations. Tea drinkers recognize  the nineteenth century Charles Grey, 2nd Earl Grey, he of tea. Charles came from a prominent family, served as prime minister of Great Britain. Stories about how the bergamot-flavored tea came to bear his name vary, but the name stuck.

The long-running television series spells it with an ‘e’, of course – inspired by main character Dr. Meredith Grey.

In many cases, the surname referred to hair color. Or beard color.

Anchetil de Greye traveled to England with William the Conqueror. Greye likely came from the Calvados region of Normandy, from a place known as Graye-sur-Mer. The English village of Rotherfield Greys also bears his name.

The place name seems to come from the Latin gratus – thankful, rather than the color.

A handful of famous figures answer to the name. Former California governor Gray Davis seems like the most well-known. He was born Joseph Graham Davis, Jr.

But the story belongs to names that start with Gray. In 2002, The Nanny Diaries gave us a privileged kid called Grayer. The chart-toppers add the popular -son ending: Grayson ranked #47 in 2015, up more than 200 places in a decade. Greyson’s rise seems even more dramatic, gaining over 450 places to reach #111 over the same time period.

Gray: By the Numbers

Count Molly Sims among the most recent moms to embrace the name. She recently welcomed son Grey Douglas, a little brother for Brooks and Scarlett. A few years earlier, Blossom alum Jenna von Oy chose the name – and the ‘a’ spelling – for a daughter.

This name succeeds for so many reasons.

One question remains, of course. What will the Fifty Shades franchise do to this name? The character in the book answered to the name Christian Grey – the same spelling currently preferred by parents.

If you’re after a name that combines a certain edge with a traditional vibe, Gray might be the name for you.

Do you prefer the ‘a’ or the ‘e’ spelling? Would you rather use Greyson or Grayer or Grady or any other name besides just plain Gray? Or do you like it short and sweet?