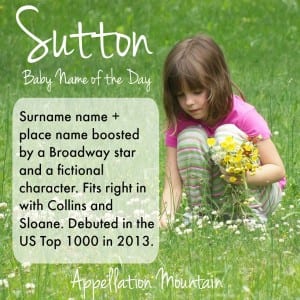 It’s a place name and surname boosted by the small screen.

Sutton: On the Map

Sutton is a familiar place name, from the Old English words for south and enclosure. There are more than four dozen in England alone, and others throughout the English-speaking world.

It’s a familiar surname, too, worn by too many notables to count. There’s Crystal Lee Sutton, the real life union organizer behind the biopic Norma Rae, bank robber Willie Sutton, as well as politicians, athletes, artists, and others.

Like many a surname, you can find a handful of children given the name over the years, boys and girls alike.

Foster’s explanation feels right, but I can’t pin down the character.

This name might have remained under-the-radar, except for two women: one fictional, and one very real.

Sutton Lenore Foster has been on Broadway since the mid-1990s. She’s won two Best Actress Tony Awards and starred in Bunheads from 2011 to 2012. She’s now playing Liza in TV Land’s Younger.

There’s also Sara Shepard’s series, The Lying Game. Shepard is a great namer – she also wrote Pretty Little Liars, the show that boosted Aria. A television version of The Lying Game ran on ABC Family for two seasons. In Game, Sutton is the twin sister of Emma.

It’s the perfect recipe for a slow-rise baby name. Plenty of future parents are watching Bunheads or The Lying Game, but because the shows aren’t mega-hits and the actresses aren’t superstars, there’s no fear that naming your daughter Sutton is like stealing a first name from Cameron (Diaz) or Blake (Lively). Sutton feels different and distinctive – and indeed, it was.

Today, Sutton feels like a sister for Collins or Sloane. A preppy, unisex choice that’s far from common, but not unusual in our age of Madison and Marlowe.

We’ll have to wait for the new stats to see if Sutton continues to climb, but my guess is that we’ll hear much more from this newcomer.

What do you think of Sutton? Is it likely to catch on?