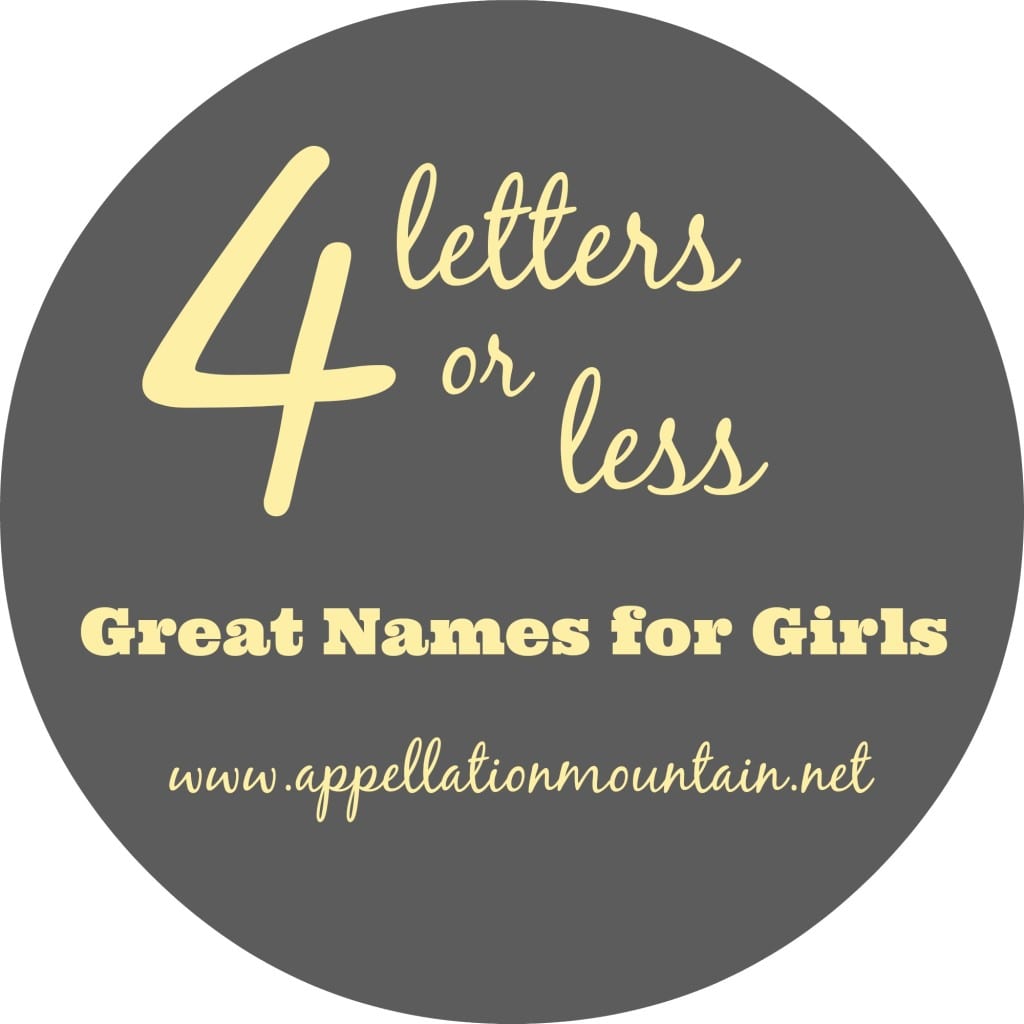 This past week, I focused on writing about mini names: Mia, Io, Jeb, and Fae.  I was certain that names were getting shorter, and convinced that I could provide statistically defensible evidence.

On pure letter count, there’s not any convincing evidence that suggests we’re seeing a trend.

I decided to really think about my favorite short names for girls – and a name can be very short and still be two syllables – or more!  So, the rule for this list is simple: all names must be four letters or less, regardless of numbers of syllables.

Here’s my list of my favorite short names for girls – and I would love to know yours, too!

There are so many variations on Ann.  Ana is shorter than Anya.  Anne has a slim, French appeal.  And yet, it is Anya that has long made my list.  Also spelled Ania and Anja, it is the Slavic and Scandinavian form of the evergreen Ann.

Another one I love: Alix, a medieval French form of Alice.

My heart belongs to the literary, cheerful Blythe – but while she’s just one syllable, Blythe comes in at six letters.  Another favorite of mine, Blair, had to be cut from the list for the same reasons.  But I do adore Bess, likely as a nickname for Elisabeth.  But in our age of Tess, she could stand on her own, too.

I’m torn between Cate – yes, with a C – and Cora.  But Downton Abbey has really sold me on Cora’s vintage charm.  She’s dignified, romantic, strong.  And longer forms of Cora are stunning – Cordelia, Coraline, Coralie, Corisande.

Of course, there’s Clio, too – my darling daughter, and so really my #1 C name, and top 4-letter name for a girl.  I’m fond of Cleo, too.  But it felt like cheating to repeat a name that is obviously already topping my list.

Lately I’ve been drawn to obscure D names: Dulcinea, Danuta, Drusilla.  The famous Ms. Barrymore has made Drew a  possibility for a daughter, but Dru – borrowed from the ancient Drusilla – is shorter and strikes me as more distinctive.

There are lots of brief E names to entertain: Esme, Evie and Eva, plus Frozen’s delightful Elsa.  And yet, I keep coming back to Edie.  She’s traditionally short for Edith, but works for Eden, too.  And in our age of Sadie, I can see her on the birth certificate, too.

I have been tempted by Fawn and Fae, but Fern calls to me.  Blame it on Charlotte’s Web.  Or on my fascination with nature names.  There’s nothing showy about Fern, but she’s got a strength about her.  You expect Fern to be capable and reliable – nice qualities in a name.

Or maybe even Grae.  The middle name of the moment is Grace, and I’m drawn to Greer – but they’re both too long for this post.  Subdued color name Gray is much less dramatic than Scarlett or Lavender, but I like her gentle sound.  I’d only use it in the middle spot, as in Lisa Rinna and Harry Hamlin’s Amelia Gray, but former child star Jenna von Oy has a daughter named Gray Audrey.

I’m a sucker for all of the -ay names, actually.  Not just Gray, but Bay, Day, and Mae in all of her spellings, too.

There are so many H names that I love, from surname names like Hadley to traditional picks like Harriet.  And yet none of them work for this post.  Goddess name Hera fits, so even though she’s not in my Top 5 H names for girls, I’ll include her on this list. I do think she’s a great choice – less expected than Emma, more wearable than Venus.

The ultimate mini name, just two letters – but still two syllables.  She’s thoroughly stylish.  And while short isn’t really for me, I could happily consider Io.

The indie flick with this name made a star of Ellen Page, and turned Juno from a goddess to an everygirl.  Sure, there are oodles of short names for girls starting with the letter J: Jane, Joan, Jeanne, June, Jules, Joy, Jewel, even Jem, hold the Holograms … but Juno is my favorite of them all.

Move over, Kate.  She’s a fellow nickname for Katherine, or possibly for Christopher and company.  Kit isn’t a name you hear a lot in 2014, but there’s no reason this brief, complete name wouldn’t work.  It’s not as kitten as calling yourself Cat – though that’s not unthinkable, either.  And there are plenty of examples of celebrated Kits – Christopher Marlowe was known by the nickname, as was frontiersman Kit Carson.  American Girl’s Kit Kittredge pushes the name back to the girls’ side, but her given name was Margaret.

Oh, how I love Lucy and Lulu, too.  But ever since Girls debuted – a show I’m not even watching – the buzz surrounding Lena Dunham has made me rethink this name.  Pre-2012, Lena was a culture-spanning possibility that was neither dated nor stylish.  Now she’s a versatile feminine name with a double scoop of cool.

I could have gone with Mary or Mae, but I’ll stick with Maud.  Some lament her resemblance to maudlin, but I like her vintage vibe.  Design Mom has a Maude who sometimes answers to Mimi, which seems like a very wearable compromise for a child.  Plus there’s the Tennyson poem and more than one royal Maud.  Honestly, I think I might like Maud better than her more popular form, Matilda.

For me, Nell is a nickname for Helena, Penelope, or maybe even Antonella.  Traditionally, she’s an affectionate form of Eleanor or other El- names, from the phrase mon Eleanor – my Eleanor – eventually blurring the ‘n’ sound with the ‘el’ to create Nell.  (Nan has a similar origin story.)  But she might just stand on her own, and in our age of Ella and Stella, I’ve also heard Nella in use.

Opal immediately came to mind for letter O, and then I found myself thinking: do I really like Opal?  After some pondering, I’ve concluded that yes, indeed I do.  She’s as pretty and understated a gemstone name as Pearl, as quirky as Olive, as unexpected as Thora.

Novelist Plum Sykes was born Victoria, and I’ll admit – I find that far more reasonable than putting Plum on the birth certificate as a given name.  But Plum strikes me as an interesting middle name, along with some other quirky P names: Pimm, Pax, or Penn, maybe?  I adore the combination used by James at Bleubird: Milla Plum.

Is Quin with just one n cheating?  I prefer the double ‘n’ Quinn spelling, and I like it better for a boy.  But Quin comes in under the four letter limit, and I don’t mind this name on a girl.

Yes, there’s Rose.  And the loyal Ruth.  But my heart belongs to the German Romy, a contracted form of Rosemary and the name of German-born screen legend Romy Schneider.  The Prix Romy Schneider is given to the most promising young actress in French film, while a gold statuette based on Ms. Schneider is the Romy, bestowed for achievement in television by Austrian newspaper Kurier.

Like the letter B, I had my name picked out: Sloane, the effortlessly stylish girlfriend of Ferris Bueller.  But she’s six letters, five even if you lop off the last ‘e’ – which I’m not inclined to do.  So S had me stumped, until I started brainstorming.  There’s Svea, a popular name in Sweden.  And then I thought of Siri.  Before she was Apple’s ever-present personal assistant, Siri was short for the Scandinavian Sigrid, a frills-free name derived from Old Norse words for ‘victory’ and ‘beauty.’  So Siri is my pick.

Another possibility: Sea.  It’s so simple, and yet such a rich name.  We hear Ocean and River, but never Sea.  Why not?  And my guilty pleasure bonus middle of the moment: Swan.

Tons of T names call to me, but my favorites exceed this post’s letter limit: Thora and Theda and Thisbe and Tamsin and Thomasina.  There’s Tess and Tate, but they’re not quite for me.  But how ’bout Thea?  There’s also Tea, as in Leoni, but isn’t it tempting to respell it Taya?  Which would ruin it for me.  So Thea, with her clunky, funky Th earns my top spot.

Say Uma and I instantly add Thurman.  It might make this glittering goddess name tough to wear, and yet it is tempting.

I’m also tempted by Vail and Vera, but Vrai – the French word for true, as in c’est vrai – has long been a favorite of mine.  I love the pronunciation – at once impossible and obvious – and the look of it.   It’s slightly less virtuous than True or Truly or Truth, but still meaningful.

My daughter’s bonus middle, a name I do adore.  While there are lots of great W names, this is the only that really stands out for me – in fact, it has triggered a minor obsession with avian names.

I could happily name a daughter Xanthe.  But Xara, Xola, Xena and company all seem too fanciful, as if the X was swapped in for a Z at the last second.  I found myself looking at Chinese names.  The pronunciation is tricky – as best I can tell, it sounds something like shee YOU.  It means beautiful.  There’s also Xue, which can mean snow, and has an even more elusive pronunciation.  So not in the first spot, but maybe as a middle name, especially if there were a story to tell.

I’ll admit it: this is something of an invention.  In Hebrew, Yaara means honeysuckle, and can be used as a personal name.  But Yara is not a spelling variant – I spotted Yaara on a list, and dropped the ‘a’ to make the letter limit.

But wouldn’t you know it?  There’s also Yara from Game of Thrones – she’s Asha in the novels, but her name was changed for the television adaptation.  It also sees some use in Arabic.  In the mythology of native peoples in Brazil, Iara is a sort of mermaid/water nymph, a green-haired temptress.  Yara has also seen some use in Brazil.

As with X, many Z names are tempting.  But they can feel too invented or creative.  Zofia – the Polish form of Sophia, and a family name for my husband – has long made the edges of my shortlist, with Sosie and Zoe as short forms.  So Zoe almost got the Z spot.  But then there’s Zora, with her equally Slavic roots, and her lovely meaning – dawn.  Add in the literary accomplishments of Zora Neale Hurston, and this is definitely my #1 Z name within the letter limit.

These are my favorites, A to Z.  How about you?  Can you choose 26?  Or just a few favorite girls’ names that are 4 letters or less?