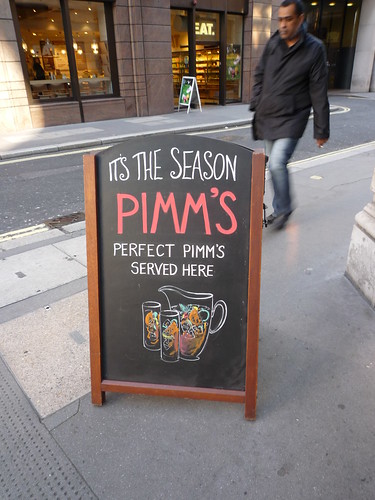 It’s a classic cocktail and a medieval appellation. Would it be a possibility today?

Thanks to Findley for suggesting Pimm as our Baby Name of the Day.

I first encountered Pimm as a nickname for the heroine’s friend in the chick lit-ish Me Times Three. Then it was a mysterious concoction favored by all of the posh socialite types in Madeleine Wickham novels.

Pimm’s is a gin-based liqueur, touted as medicinal by inventor James Pimm in the 1820s. The original drink is Pimm’s No. 1 Cup. As the company expanded, additional blends were added, all with a number. Although it is now owned by global spirits conglomerate Diageo, Pimm’s still has a certain cachet – at least from an American perspective – thanks to its associations with Wimbledon, polo, and all things English country house.

The surname predates James Pimm, found on families back to the Middle Ages. There are two possible – and possibly overlapping – origins.

First Pimm could come from Euphemia – a Greek name that literally translates to “good speech.” The second-century martyr St. Euphemia is a major figure in Eastern Christianity. Chances are that she came to the attention of the English-speaking world thanks to the Crusades starting in the late eleventh century. The saint’s relics were captured by Crusaders, and her name begins to appear throughout Western Europe around the same time.

Effie and Phemie are the logical short forms of Euphemia, but why Pimm? It may have simply been a corruption, or it may come from the Middle English tendency to pronounce every letter. Many medieval Euphemias actually spelled their name with an f – Effemy is one vernacular form. Pymme, Pimme, and Pimm are all found, too.

Second, it could be derived from a Saxon masculine name Pymma. But whether your surname related to the Saxons or developed later would be difficult to say. A number of sites conflate the two, even though several centuries separate them.

There’s another masculine origin for Pimm. In Dutch, he’s a short form of Willem. Just like the English William can answer to Bill, Willem becomes Wim and Wim has morphed into Pim. Anne Frank and her sister Margot used this nickname for their father, though his given name was Otto.

Today you might catch financial journalist Pimm Fox of Bloomberg News – I’m not certain how he came by his unusual name.

You won’t likely meet a child named Pimm, though. It was given to fewer than five girls or boys in 2010, and has never registered in the US Top 1000. It’s so little used that gender is impossible to assign. On the one hand, Pimm has the same sweet simplicity as Nell or Ann. On the other hand, with short names like Finn and Flynn on the rise for boys, parents are considering choices like Penn or perhaps even Pimm.

The alcoholic associations are probably why more parents haven’t landed on this particular sound, but there’s enough history here to consider Pimm a possible choice in the middle spot. Or, if you dare, a simple, crisp given name that you can explain has origins that date back to well before happy hour.