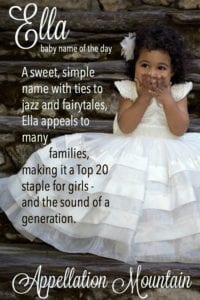 Ella stands as a popular name for girls, and the sound of her generation.

Thanks to Ivy for suggesting our Baby Name of the Day.

But it could be a nickname, too, derived from nearly any name with an el- sound at the beginning or the end. The formal name associated suggests the possible meanings.

Perhaps the most famous nickname story comes courtesy of Cinderella. Sing along with me: loving father dies, wicked stepmother puts kind-hearted daughter to work as a servant for her and the wicked stepsisters.

The recent live action Disney movie made it clear. Our heroine grew up as plain and lovely Ella. The Cinder- prefix was attached by her cruel and callous step-family, though she later embraced the full name. And married the prince and lived happily ever after …

Gail Carson Levine added a different kind of fairytale twist with her Newberry Medal of Honor-winning 1997 novel Ella Enchanted. Played by Anne Hathaway in the 2004 movie, it came just as the name was set to soar.

The name feels nicely retro and musical, too. Credit goes to jazz legend Ella Fitzgerald. With a career stretching from the 1930s into the 1990s, her renditions of jazz standards netted her 13 Grammy Awards, the National Medal of Arts, and a Presidential Medal of Freedom.

A string of celebrity parents have embraced the name. There was John Travolta in 2000, Ben Stiller in 2003, and Mark Wahlberg later the same year.

But the 2017 headlines belong to the Clooneys, George and Amal, who welcomed twins in June: a boy called Alexander, and a girl with this sweet, simple, and jazzy name.

Ella: By the Numbers

Reasons abound for the name’s revival. Beyond the celebrities and the pop culture ties, let’s add a few more:

It’s in heavy use throughout the English-speaking world and elsewhere in Europe, too.

Five of the current Top 100 names contain this sound, not counting so many El- names, from Elizabeth to Ellie to Elena. In many ways, it exemplifies the sound of girls’ names in the early twenty-first century.

That’s the only drawback to this sweet, simple, and stylish name. Not only is it powerfully popular, but it sounds like half a dozen other chart-toppers, too.

And yet, it remains a stylish choice, associated with fairytale heroines, a jazz legend, and now one of the most famous celebrity babies born in 2017. No wonder parents continue to consider the lovely Ella the perfect name for a child.

Would you consider this name for a daughter? Or does the name’s popularity give you pause?

Originally published on July 7, 2011, this post was revised and re-posted on December 4, 2017 as part of Celebrity Baby Names Week.