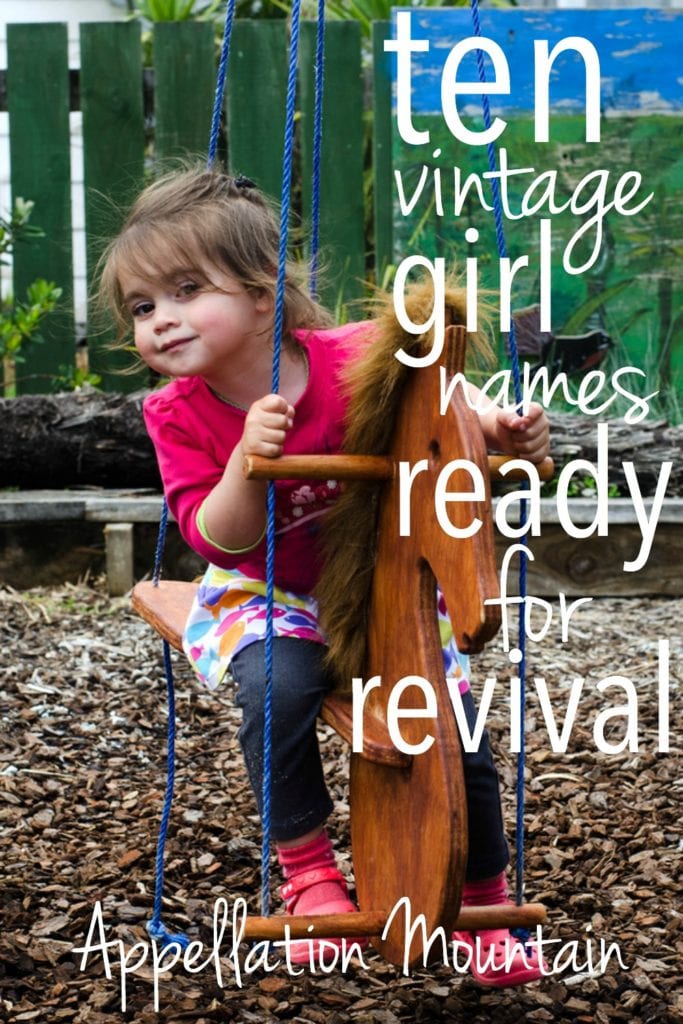 Vintage girl names are forever rising, becoming mainstream, and then falling out of use once again.

Hibernation lengths vary, but it often takes about a century for a name to cycle from stylish to old-fashioned to fresh once more.

The current Top 100 is packed with names that were stuck in style limbo thirty years ago. Circa 1986, Alice had loss her Wonderland luster, and was more Brady Bunch housekeeper. Only septuagenarians answered to Cora or Hazel. Violet and Stella would have been unthinkable for newborns.

Fast-forward to 2016, and that’s the roster of this year’s kindergarten class.

So which vintage girl names might be next? Here are ten names that I’m watching.

Smoosh together the sounds of Mae, Ava, and Alice. Add in a nature name tie. Now give that name to an adorable character in an animated movie franchise.

Yup, I’m talking about Mavis. It sounds old-fashioned … except all of the sounds are actually back in favor. And Hotel Transylvania’s lovable vampire by the name, voiced by the equally appealing Selena Gomez, finalizes the transformation.

Mavis peaked back in the 1920s, meaning it has been almost a century. And 263 girls were given the name last year, putting it within striking distance of the US Top 1000. (Last year, it took 267 births to make the list.)

2019 update: Mavis just might be back. It returned to the US Top 1000 for the 2016 list, published in May 2017. But it’s stalled out since then, even though the Hotel Transylvania series kept the character in the spotlight.

How can it be that Harriet remains outside the US Top 1000? My generation grew up with the not-so-nice Mrs. Olsen, mother to original mean girl Nellie, on Little House and the Prairie. Mrs. Olsen’s name? Harriet.

But we also had Harriet the Spy, which became a memorable movie in 1996. Surely the enduring books and movie ought to have more influence? Besides the children’s literary hero, there’s also Harriet Tubman, Harriet Beecher Stowe, and suffragette Harriet Stanton Blatch.

Harriet’s best days were way back in the nineteenth century. The name has risen slightly in recent years, with 179 newborn girls born last year. That’s the most since the late 1960s, but it’s still not quite rare. Built-in nicknames Hattie and Hettie make this choice even more wearable.

2019 update: So far, Harriet remains outside of the US Top 1000. That said, Hattie climbed into the US Top 500, making me think that Harriet might not be too far behind.

Louisa recently returned to the US Top 1000. For now, her tailored sister Louise languishes beyond the charts.

It doesn’t track, does it? Louise fits right in with Genevieve and Madeleine, a French name with nicknames galore. The name peaked in the 1910s, and has been inching back into greater use. 240 girls were named Louise last year.

It’s nicely musical. Maurice Chevalier sang “every little breeze seems to whisper Louise …” back in 1929. In the 1980s, Kenny Loggins begged Louise to “pull me off of my knees” in Footloose. We love Lucy and Luna and Lucille, too. Surely Louise’s day is drawing near.

2019 update: Louise is back! It currently sits at #800, and it’s easy to imagine the name continuing to climb.

Speaking of Lou and friends, Lula is one to watch. It’s the name chosen by Liv Tyler for her third child – and first daughter. Lula evolved from the longer Lou- names, but in our age of Emma, it stands just fine on its own.

Unlike the other names on this list, Lula might not be instantly recognized as a vintage revival. Instead, some might see it as a Lola-Lila spinoff. It’s not so, though. In Breakfast at Tiffany’s, we learn that Holly Golightly started her life as Lula Mae Barnes. Writer Carson McCullers was born Lula Carson Smith. Back in the nineteenth and early twentieth centuries, the name reached the US Top 100.

So, yes, Lula deserves to be considered one of the vintage girls names – and one that’s prime for revival today.

There haven’t been more than 100 Lulas born in a single year since the 1960s – but parents welcome 99 newborn Lulas last year!

2019 Update: 108 girls were named Lula last year, still not enough to boost the name into the Top 1000. But it continues to feel like one of the great vintage girl names.

Ever since Mad Men debuted way back in 2007, I’ve been banking on Betty. It’s the ultimate homemaker name – Betty Crocker, anybody? Or maybe Betty Rubble? And in 1988’s Heathers, Betty Finn was Veronica’s former BFF, the good-as-gold girl who tells us, “Nice guys finish last. I should know.”

But Mrs. Draper added a darker and more glamorous edge to the name. She reminded us of Betty Grable and Betty Friedan.

Betty started out as a nickname for Elizabeth, of course, but it reached the US Top Ten on its own in the 1920s, and stayed there into the 1940s. It’s possible that plenty more Elizabeths answered to Betty, and that could still be true today – Elizabeth ranks among the most evergreen of girl names.

As of today, though, Betty falls flat. The name was given to 186 girls last year, which is pretty consistent with recent years. Still, it’s a great alternative to Molly and Sadie, a normal name that no one is using.

2019 Update: I suppose we might miss an early wave of baby Bettys, if it was short for the classic Elizabeth. It was up to 215 births last year, which feels like it’s striking distance of the US Top 1000. So maybe …

Bernadette peaked in the 1940s, which means it doesn’t quite satisfy the 100-year rule. And yet, this name comes up all the time when we’re talking about vintage girl names ready for revival. There’s been a small increase in use in recent years, too. The US welcomed 152 newborn Bernadettes last year – that’s the highest number since 1998.

That’s a different picture from many of the other names, but Bernadette has always been a little bit different. It’s peaked and fallen in a small way multiple times during the twentieth century. Credit a mix of pop culture and spirituality. In 1943, The Song of Bernadette told the real life story of Bernadette Soubrious, who claimed she saw the Virgin Mary appear to her at Lourdes beginning in 1858. Jennifer Jones won an Oscar for her performance.

In 1967, The Four Tops scored a major hit with “Bernadette.” The name is unmistakable in the song, repeated multiple times.

2019 Update: Bernadette has doubled in use over the last five years. It’s not enough to put the name back in the US rankings, but maybe the big screen adaptation of bestseller Where’d You Go, Bernadette? will tip it?

Take Top 100 darlings Nora and Cora, add a healthy dose of Lily and Daisy, and explain why Flora remains so rare! As of 2015, 173 girls were given the name. That marks an increase, but far from the name’s nineteenth century peak.

There’s a Flora in Turn of the Screw, and another in Cold Comfort Farm. For years, a script called Flora Plum, about circus performers during the Great Depression, has been knocking around Hollywood. Jodie Foster was said to be directing for years. That’s the kind of jolt that could bring this name back.

Instead, there’s Flora Thompson, author of Lark Rise to Candleford. The stories, set in 1940s England, were adapted by the BBC between 2008 and 2011. It’s often recommended to those who love other period pieces, like Downton Abbey. But that’s not enough of a famous Flora to bring the name back into the spotlight.

Still, sound alone could persuade parents to give this name another look. Another vintage choice with a similar sound to consider? Italian place name and heroic nurse name, Florence.

Winifred featured on the blog a few days ago, and helped to inspire this post. The case for Winifred is straightforward: the name peaked in the 1910s, and has been overlooked for ages. Now we’re showing new interest in nickname Winnie, so why not Winifred? It fits right in with other formerly fusty names on the rise, from Margot and Felicity to Emmeline and Estelle.

From Tuck Everlasting to Hocus Pocus, you might already have a favorite Winifred. The Wonder Years, however, doesn’t quite count – their Winnie was a Gwendolyn.

There’s a small, but undeniable, rise in use for Winifred in recent years. 156 girls were named Winifred in 2015, the biggest number since 1963. File Winifred with the names that are so far out, they’re in.

2019 Update: Alas, Winifred remains a neglected gem. The good news? You can safely choose it for a daughter and know she won’t be one in a crowd.

A reader spotted Millicent in a fashionable New York neighborhood, and I’ve been crushing on it ever since. Margaret, Meredith, Millicent – it’s not so fusty-dusty, is it?

Millicent peaked way back in the 1920s, which makes it just ready for the century rule to apply. Like Winifred’s Winnie, there’s Millie, a go-to nickname for Millicent that makes it extra wearable.

Despite my enthusiasm, Millicent has yet to enjoy a resurgence. It’s been ages since more than 100 girls were given the name – all the way back to 1970, in fact.

And yet, there are some worthy mentions. Anne Bronte and Henry James both used the name; so did JK Rowling. With centuries of use, it feels familiar, and yet rare at the same time.

2019 Update: While Millie is white-hot, Millicent remains quite rare.

Full disclosure: my daughter answers to Clio. I might be biased.

Then again, I can confidently tell you that Cleo sounds exactly right on a child today. It fits with Willow and Harlow and Margot.

Strictly speaking, Cleo is vintage. The name peaked in the 1910s. Cleo Ridgely became a silent film star, and Cleo Moore, a blonde starlet fro the 1950s. And yet, with that bright o-ending, Cleo feels decidedly modern, too.

118 girls received the name last year, suggesting that Cleo might be slowly making its way back into wider use.

Do you think any of these vintage girl names are ready for a comeback? What names would you add to the list?