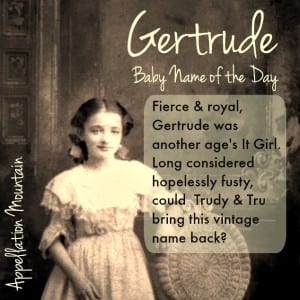 Today’s post was originally published on February 22, 2010. It was substantially revised and re-posted on April 13, 2015.

Once worn by queens and saints, today this name is often cited as the name you’d never give your girl.

Thanks to Jillian for suggesting Gertrude as our Baby Name of the Day.

Many a Gertrude was born royal, including the seventh century Saint Gertrude of Nivelles.

Between the 1000s and 1400s, there were Gertrudes aplenty amongst the ruling houses of Austria and all of the other states of the Holy Roman Empire. Denmark and Hungary had queens by the name. It was also the name of the devious queen in Shakespeare’s Hamlet.

Let’s say this: if you were penning a work of historical fiction set in Germanic Europe circa 1200, Gertrude is a solid choice for an aristocratic, accomplished woman.

By the nineteenth century, Gertrude was all the rage.

Okay, so that’s not quite as popular as Ava. Maybe she’s more like Andrea in the 1980s or Jasmine in more recent years.

Still, there were plenty of women, real and fictional, answering to the name in the era.

Here’s a quirky one: the name Gertruda apparently found favor with Russian revolutionaries. Why?  The phrase geroinya truda means Hero of Labor – and can be contracted to form Gertruda.

And yet, every member of Generation X knows the name, thanks to 1982 blockbuster E.T. the Extra-Terrestrial. A young Drew Barrymore played adorable, five year old Gertie.

There’s also Trudie, as in Styler, wife of Sting. Trudy could be a sister for Hattie, or a substitute for Lucy. Of course, like Sadie and company, it’s easy to imagine parents forgoing the formal name.

Another possible short form: Tru or True, both current in 2015.

But what about Gertrude?

None of the numbers are enough to declare a trend, and yet I think the true sound is on the upswing.

If you love Beatrice and Eleanor, but worry that they’re too common, Gertrude might be just the thing – a serious name with stylish short forms, a classic seldom heard today.

What do you think – is Gertrude ready for revival?