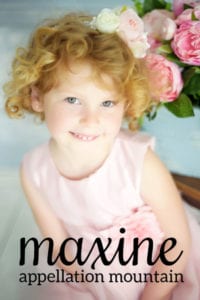 Maxine debuted in the late nineteenth century before fading into old-lady status by the 1970s. But now? It’s back in a big way.

Max names trace back over millennia. There’s Maximilianus, at home in the Roman Empire. Dozens of Max names followed, in use across Europe. Today, eight boys’ names starting with Max, including just Max, rank in the US Top 1000.

And then along came Jessie McDermott.

In 1889, an aspiring actress changed her name from Jessie McDermott to Maxine Elliot.

Career success followed. By 1903, she starred on Broadway. In 1905, she headed to London, where she met King Edward VII. Returning home, she opened her own theater appeared in silent films, and then retired, only to continue amassing a personal fortune. It’s quite a story.

Elliott didn’t invent the name. Not exactly. After all, Pauline and Josephine both ranked in the US Top 100, and names like Geraldine and Albertine were familiar, too.

That makes it something of a Jazz Age staple.

As hemlines fell and the country entered World War II, Maxine faded in the rankings. But a generation of women by the name grew up.

Maxene Andrews, sister to LaVerne and Patty, became one of the most successful music acts of the 1940s. They’re the trio behind “Boogie Woogie Bugle Boy” among other hits.

Other famous women by the name include:

Despite plenty of positive associations, for years, the most powerful image was an acid-tongued, cantankerous senior citizen. Maxine has graced Hallmark’s Shoebox line of greeting cards since 1986. Books, mugs, and assorted merchandise followed.

Pop culture and celebrity birth announcements have given us a handful of reasons to rethink the name, too.

And then came Stranger Things‘ season two character, Maxine “Max” Mayfield. Besides Elle, she’s the only girl among the monster-fighting friends. The season debuted in late 2017, so the character alone doesn’t get credit for our re-imagining of the name. But if parents are struggling to imagine the name on a child? Max Mayfield changes everything.

The boyish nickname Max fits a pattern, too. We love Alexandra called Alex, Charlotte shortened to Charlie, and Josephine known as Jo. Why not Maxine, nickname Max?

Overall, Maxine reads quirky and spirited, traditional but not buttoned-down. It’s less classic than Katherine. It feels like a successor to Hazel, the kind of name that fell to the bottom of the charts – but now sits near the top once more.