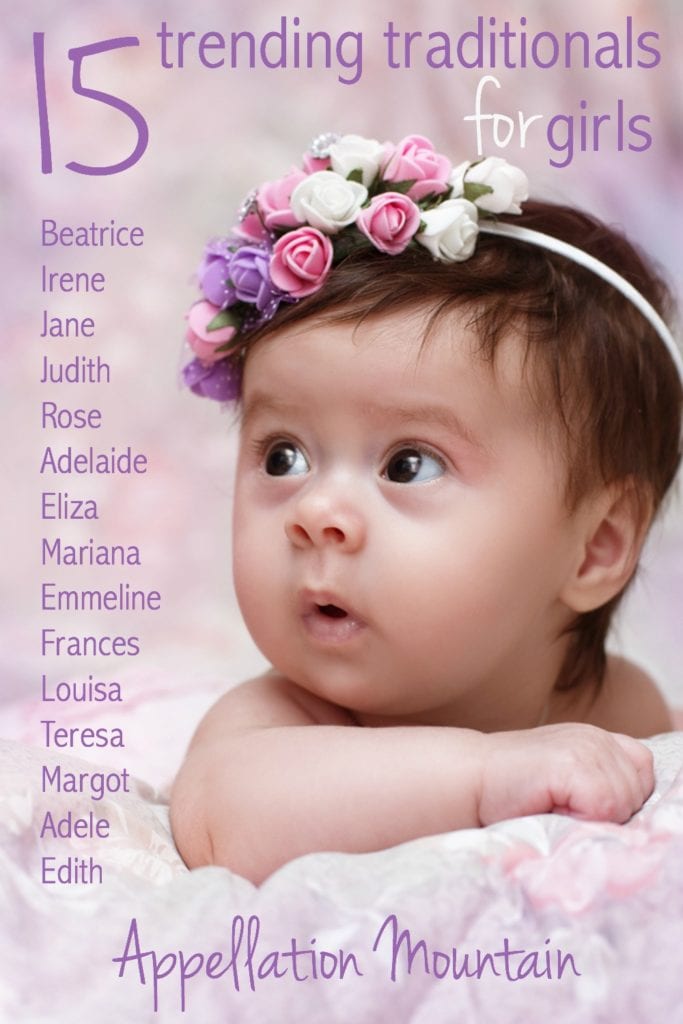 What are the trending traditionals for girls?

They’re the names that feel timeless, but are actually catching on in recent years. They have history stretching back centuries – or maybe even millennia – but feel just right for 2016.

Trending traditionals for girls are the next generation of names like Emma, Sophia, and Charlotte. They’re the perfect choices for their younger sisters, or maybe their future daughters.

These fifteen names on the list are great alternatives to popular traditionals like Lily and Amelia. None of them are in the current US Top 100. Some names feel impeccably stylish today; while others feel downright undiscovered.

Trending Traditionals for Girls: Up 25 or More Places

Dante’s beloved Beatrice became a Top 100 favorite in the US from the 1890s through the 1930s. By the beginning of the twenty-first century, Beatrice teetered on the edge of obscurity. But now this name, equal parts serious and romantic, feels fresh once more. Bryce Dallas Howard and Paul McCartney both gave this name to their daughters. The heroine of Divergent is Beatrice, called Tris.

Speaking of meaning, Irene comes from the Greek word for peace. Eirene was a goddess of peace, particularly venerated in Athens. As a girl’s name, Irene peaked in the 1910s, then faded for decades. Today, this tailored choice feels right at home with favorites like Evelyn and Alice.

Jane boasts history galore, from Lady Jane Grey to beloved author Jane Austen to Nobel Prize winning activist Jane Addams. But Jane also sounds modern, a tailored name for girls like Sloane or Blair. A Top Ten choice from the 1910s through the 1960s, Jane has long been dismissed as plain and predictable. Today that simplicity is a strength, and this feminine form of John is on the rise.

Judith sounds serious – a name for a neurosurgeon or high-ranking judge. Judy is a perpetual teenager, the Jetson’s firstborn. And Jude is a white hot Biblical name for boys. Add it up, and no surprise that we’re hearing more of Judith for girls in recent years.

Like Jane, Rose’s simplicity is a strength. A favorite of the 1910s, and a Top 100 pick through 1960, Rose was one of The Golden Girls, retired by the 1990s. Kate Winslet’s character in Titanic reversed Rose’s slide temporarily, but only in recent years has this name really made a comeback. Scarlett Johansson named her daughter Rose Dorothy in 2014. 2015 marks the fifth straight year of double-digit gains for this lovely name.

Trending Traditionals for Girls: Up More than 35 Places

Adelaide isn’t nearly as popular as Addie names Adalyn and Addison, though it’s ahead of Ada and Adele. Regal Adelaide is a cousin to Alice, but feels more like Charlotte or Eleanor. A nineteenth century favorite, Adelaide also belongs with place names like London and Brooklyn. If meaning matters, this name delivers. It comes from a German name meaning noble.

Originally short for the evergreen Elizabeth, Eliza stands on its own. Think of My Fair Lady’s Eliza Doolittle, or Mrs. Alexander Hamilton, also known as Betsey. This nineteenth century favorite left the US Top 1000 entirely in the 1950s. Beginning in the 1980s, Eliza was rediscovered by parents looking for a classic girl’s name with an edge. Thanks to a long and steady comeback, Eliza reigns as the grande dame of trending traditionals for girls.

Welcome to the age of Isabella! Long-time #1 name Mary continues to slide, while the romance language Mariana climbs. This story is not like the other trending traditionals for girls, though. Mariana debuted in the US Top 1000 in 1980 – that’s positively nouveau. The name fell in recent years, but climbed in 2014 and 2015. Today it feels like an obvious substitute for the elaborate girl names near the top of the charts, like Sophia and Victoria.

Trending Traditionals for Girls: Up More than 50 Places

Many of the Francis names are enjoying a revival, with buttoned-up Frances leading the pack. As lady-like as Alice, but with cool nicknames Frankie and Franny, it’s easy to see why Frances is among the trending traditionals for girls.

Until recently, Louisa served as my go-to “Can you believe this name isn’t in the Top 1000?!” name. Now literary, lovely Louisa is back, and climbing up the charts quickly. Despite a gain of more than 50 places this year, Louisa still makes a great alternative to Amelia and Sophia.

Teresa has bounced around the rankings since 2000, ranging from #344 in 2000 to #720 in 2014. It spelled a name on a sharp decline. But then, Teresa climbed 65 places in a single year. Maybe that’s because Tessa – originally a nickname – continues to rise. Or maybe it’s just time for this traditional girls’ name to feel fresh and fashionable once more.

Trending Traditionals for Girls: Up More than 100 Places

Parents can’t quite decide if we want to name our daughters after Adele or not. The name has bounced all over the US Top 1000 since Adele’s 2008 breakthrough. But as of 2015, it seems like Adele will finally join all of those Addie names – including Adelaide – on the upswing.

Edith, the often overlooked sister of Downton Abbey, came into her own as the series neared an end. Could that help explain the rise of this former favorite? With Old English roots, Edith was revived in the nineteenth century, and seems poised for a second comeback today. Another reason to love this traditional name? Built-in nickname Edie.

Moviegoers might notice something interesting about the trending traditionals for girls making the biggest leaps this year: two of the three are names from the Despicable Me franchise, which featured a trio of adorable orphaned sisters adopted by a former criminal mastermind in 2010 and 2013, with a third installment due in 2017. (Only Agnes is missing!) Margot, originally a French diminutive of Margaret, boasts a nicely modern feel with a retro touch. Call it more of an early twentieth-century vibe; after all, the name peaked in the 1930s.

What are your favorite trending traditionals for girls? Are there other names that should be on this list?