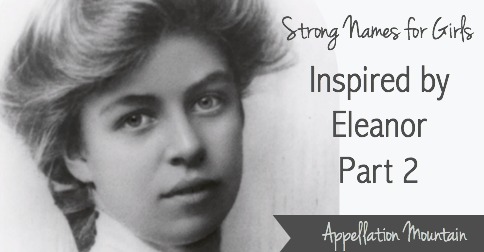 Strong names for girls are popular, and for good reason. They combine femininity and backbone, and they can be found in nearly any naming style, from modern innovations to the tried and true.

Eleanor names tend towards the traditional, but they’re never dull. Read on for more of my favorite strong names for girls inspired by Eleanor – and if you missed the first installment, check it out here.

Margaret – I’ve always liked the idea of Margaret as a sister for Eleanor. They’re both strong names for girls with long histories of use, ties to saints and royals, and a tailored, frills-free appeal.

Martha – Another First Lady name, as in Martha Washington, but also a New Testament one. There’s something homespun about Martha. You can imagine Martha quilting, or canning preserves. Yet the name is surprisingly versatile. One of MTV’s first veejays was denim overall-sporting Martha Quinn. Another is Oprah friend and bestselling self-help author Martha Beck. And who can forget Martha Stewart?

Mary – This long-time #1 name for girls has fallen in recent years, and even Downton Abbey’s Lady Mary Crawley hasn’t brought this name back. But it’s a towering classic of a name, as saintly and regal as Margaret or Eleanor, and, depending on your faith, among the most courageous women in human history.

Meredith – This Welsh name is used for boys and girls, and as a surname, too. But in the US, it’s almost exclusively given to girls. This makes Meredith feel a little more modern than Margaret, but every bit as strong. While it was big in the 1980s, I don’t think it feels like a dated name at all.

Millicent – At first, Millicent makes me think of a mouse – a polite and dainty mouse. But it comes from Amalswinth, a Germanic name composed of the elements work and strong. (And a name that I’ve been watching lately, BTW.) It’s been whispered down the alley into all sorts of different forms, but Millicent – in various spellings – has been around since the sixteenth century. During the first World War, Lady Millicent Hawes organized an ambulance unit in Belgium, was briefly trapped behind enemy lines, and returned to direct field hospitals in France.

Octavia – Octavian is familiar to anyone who studies the ancient world – or watched HBO’s Rome. Octavia is the feminine form, often suggested as a substitute for Olivia, and shares the masculine form’s meaning – eight. It’s also a musical name, thanks to the term octave, which shares the same Latin root. Why does Octavia make the list rather than Olivia or Ophelia? On sound alone, I think it comes in stronger than the others. Oscar-winning actress Octavia Spencer helps, too. 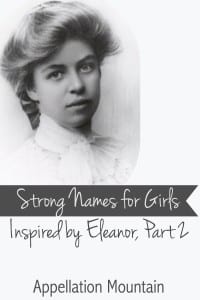 Olive – Olivia is long and flowing, while Olive is quieter. A nature name associated with peace, Olive has gone from seldom heard rarity to rising favorite in recent years. It’s every bit as strong as Eleanor, and less expected, too.

Portia – Not every female character from Shakespeare’s works reads strong. Juliet didn’t make the list, nor did Bianca. But Portia is beautiful and brilliant, the wealthy heiress at the center of events in The Merchant of Venice. Her quick wit in the courtroom saves Antonio. The name sounds just like luxury automobile manufacturer Porsche, and it ultimately comes from the Latin porcus – as in pig. These shortcoming aside, Portia is undeniably a strong name for a daughter.

Rachel – Rachel is an Old Testament name long used in Jewish families, and broadly popular in the English-speaking world following the Reformation. It had a good run in the 1980s, and became forever tied to the 1990s thanks to Jennifer Aniston’s character on Friends. Some might put Rachel in mom name territory with Melissa and Jen, but I think it remains a strong name for a daughter, thanks to a frills-free and distinctive sound.

Rosamund – Many of the Rose names aren’t quite serious enough to feel like Eleanors, but Rosamund has a strength that I think the frillier Rosalie and Rosanna don’t quite possesses. While the name comes from Germanic elements meaning horse and protection, we associate Rosamund with Latin rosa mundi – rose of the world.

Rose – Of course, just Rose is a name with a surprising amount of steel. Maybe it’s the name’s strong and simple sound. Or maybe it’s the almost intimidating elegance of the flower. Rosie is friendly and accessible, but Rose is an Eleanor – definitely among the strong names for girls.

Ruth – Ruth is another Old Testament possibility, but it doesn’t feel as specifically religious as some names. That’s probably because it’s been widely used in years past, adding vintage charm to the name’s appeal. Ruth’s -th ending is interesting, too – ‘th’ has been out of favor in recent decades, but with the rise of Theodore ‘th’ names for girls also seem to be making a comeback.

Simone – There’s lot of talk about the upcoming biopic based on Nina Simone’s life. The singer is doubtless part of the reason the name appeals. But it’s also a tailored name that feels feminine without being frilly. Writer, activist, and philosopher Simone de Beauvoir adds an intellectual cast to the name.

Sophia – Sophia is an unapologetically pretty name, which might seem to disqualify it from this list. After all, Eleanor and Margaret and Joan seem to belong to a different family. But Sophia’s meaning – wisdom – puts the name right back in their company, as a smart and capable choice for a daughter.

Susan – Susan didn’t make the first draft of this list, and then I thought – can I really leave off the given name of Susan B. Anthony, the abolitionist and suffragette who did so much to change the world? I’ve often thought that if Susan hadn’t been such a popular name in the 1950s, it would be a slam dunk now: tailored, feminine, with ties to the natural world (it ultimately comes from the Hebrew word meaning lily or rose) and the ‘oo’ sound of Lucy and Ruby. Instead, it’s in style limbo today, but if you’re after suffragette-inspired strong names for girls, it works beautifully.

Sybil – Sybil is the youngest of the Crawley sisters from Downton Abbey, and all three of their names are Eleanors. Edith appeared on the first part of this list, and Mary is listed above. In the ancient world, a sibyl was a prophet, always a woman. Michelangelo painted them on the ceiling of the Sistine Chapel. The name was used way back in the Middle Ages, and occasionally since then.

Theodora – Theodora just sounds like a strong name for a daughter. Much less common than the masculine Theodore, Theodora still has history as a given name. There was a Byzantine empress and a Grey’s Anatomy character, and zippy nickname Thea recently re-entered the US Top 1000.

Strong Names for Girls: U through Z

Ursula – Oh, Ursula! If not for the sea witch in The Little Mermaid, I think more of us would see this name’s charms. It’s clunky and unexpected, yes. But it’s also undeniably strong – how can any name than means bear be anything but? Golden Globe-winning actress Ursula Andress – you probably know her as a Bond girl – should lend the name some glam.

Valentina – Valentina might make you think of February 14th, but all of the Val- names come from the Latin valens – strong, also the root of our word valor. It’s romantic, yes, but also daring. If you know your aerospace history, Valentina might come to mind for another reason – the Soviet Union’s Valentina Tereshkova was the first woman in space. The name is used in Italian and Spanish, as well as Russian and other Slavic languages, making it international, bold, and yes, strong.

Victoria – Was there ever a name more appropriate for a queen than Victoria? There’s a whole story there, but suffice to say that Victoria now feels like the kind of name that can command an empire. The meaning doesn’t hurt, either – it means victory in Latin.

Vivian – I included Evelyn on the first half of this list, and Vivian fits for all the same reasons. It’s modern and vintage at once, a tailored and straightforward name that seems capable of big things. It could be the name of the brilliant CIA agent in the newest blockbuster, or a lion tamer or a deep sea diver. Maybe the name’s Latin roots – it means alive, from vivus – are the reason.

Winifred – Winifred strikes me as somewhere between the frilly Arabella and the solid Gertrude. There’s some whimsy to Winifred, but just the right amount. It comes from Welsh, with the spelling changed to resemble existing Old English names.

Zenobia – Maybe Zenobia is more of an obscure-strong Hermione than a traditional Eleanor. But back in the third century, a queen named Zenobia led her people in revolt against the Roman Empire. That takes moxie. It’s also the name of a character in Nathaniel Hawthorne’s Blithedale Romance, and the middle name of Tina Fey’s older daughter, Alice Zenobia.

Which strong names for girls would you add to this list? And don’t forget to read the first half of the list here.